Just moments ago, Yasiin Bey (f/k/a Mos Def) and Preservation released REcstatic—a free remix project of Mos’ 2009 fourth solo album, The Ecstatic. The 16-track free effort (including “Twilight Speedball”) comes from Preservation’s Mondieu Music. Almost entirely produced by Yasiin’s tour deeajy and musical collaborator he work is heavy on samples and imagination, made with all the original tracks from the Downtown/Atlantic Records original.

Speaking with HipHopDX yesterday (June 11), Preservation fondly recalls the days when an exclusive remix was compelling in its own right: “It was so much more special. You would hope that that 12-inch [record] had a Large Professor remix on it, you would just wait on something like that. And those guys elevated that song sometimes, sometimes it wasn’t as good, but, sometimes it was better. That was the fun in waiting for it and I think that’s lost in a lot of aspects.” 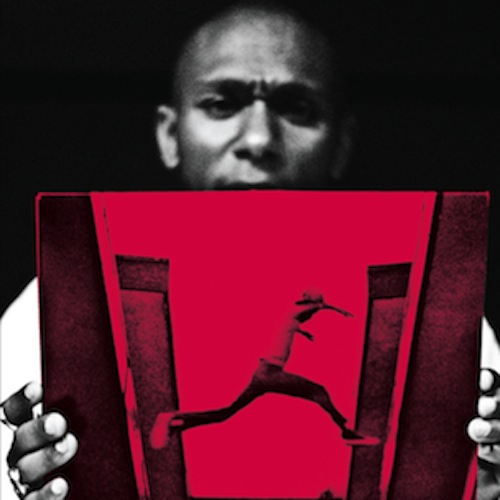 Why Preservation Decided To Remix Mos Def’s The Ecstatic

While the original version of The Ecstatic album stood out as one of 2009’s most forward-thinking Hip Hop albums (especially on HipHopDX), Preservation has recently spent more than a year mounting a comprehensive reimagining while travelling and performing internationally alongside Bey himself. What first started as a remix of a couple of the album’s tracks quickly evolved into a self-assigned challenge to give the whole release his own treatment. Perhaps even more compellingly, some of the final remixes on the REcstatic, pronounced “re:ecstatic,” are products of naturally progressing stage performances. Specifically, in the case of the original Slick Rick-featuring Ecstatic number, Pres worked out the remix in the process of switching up a live routine: “When we’re doing ‘Auditorium,’ he still wanted the Slick Rick verses to play, so he would do his part and we had an instrumental of the first part without his vocals and the second part with Rick’s vocals. So there was this one moment, it happened spontaneously on stage, where I had a good mix of it and threw it in and then Rick’s part is my remix version, so it was kind of, he rocked the original, and the remix came in with Rick.”

Beyond his stage attachment to the source material, Preservation also acted as a close working partner and producer on 2006’s Tru3 Magic and The Ecstatic itself, lending him a unique perspective on its original construction and direction: “I feel like [Yasiin Bey] was being influenced by a lot of different sounds, sounds that were already there and that were already in the lives of everybody around but coming back around. So, sounds from the world and different Eastern sounds and stuff that [Madlib] was doing and rediscovering [J Dilla’s] stuff through different people and just kinda finding something that he was comfortable to grow with, I guess. He didn’t get a bulk of stuff [at once], he was just kind of doing [the songs] individually and though a lot of stuff that didn’t make the [final version of the] album sounded very similar, they were from a lot of different producers. I feel that all the music worked together, I mean there were certain tracks that maybe some people were like ‘Oh, this doesn’t fit’ but I feel at the same time something like ‘Marvelous Times,’ people could be like ‘oh that beat doesn’t fit,’ but what he’s saying on it, the beat being so powerful, it was like in the middle of everything. At first I didn’t really like the song but listening to it in the album it was kind of like ‘oh this is this one big statement and everything else is balancing around it.’” 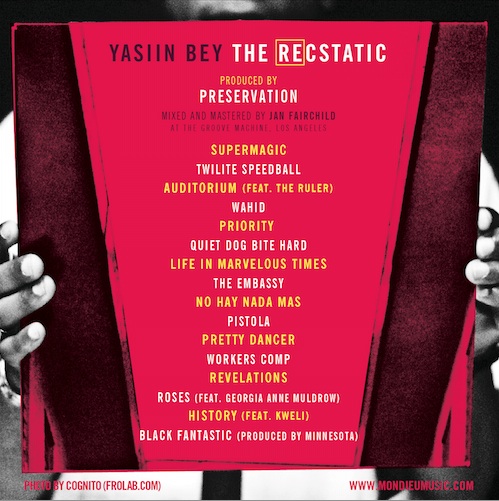 The Musical Approach To REcstatic

Given the often careless nature of the remix in 2013, or, for that matter, the slow evolution of the term’s meaning into a place-holding advertisement for extra verses, Preservation has obviously taken a nostalgically thoughtful approach to his restructuring: “[Because of] the attachment to the original and being there when it was constructed and having an emotional connection to it, I couldn’t half-step with this, for me it was a personal thing. And at first it wasn’t like ‘I’m going to do this and put it out,’ I was just doing it for me to take the challenge ‘cause it’s not fucking easy. [Laughs] I know remixes for Hip Hop can be very simple and very easy and they’re fun, but, as far as this was concerned, there was a lot of singing and weird time signatures in the original beats, there was a lot of awkward breakdowns so it was super difficult. Primarily, it was just a challenge, I got all the acapellas because I wanted to just do the ‘Quiet Dog’ remix, so I got the acapella and that was easy because he was just rhyming. And then I got a couple of the others and it became really difficult and I wanted to keep it sample-based because the original album was sample-based for the most part. So I was like ‘I’m gonna do it,’ and when I was listening to the original I was trying to go in that direction, so if it was an Indian-style beat I would go into that section of my collection like ‘Let me try and find something like Arabic strings or just a straight bass-line for “Revelations.”’ I was trying to find the same kind of tone and keep his energy, and that’s difficult when you’re flipping through tons of records just to find the same pitch, especially for singing. That’s one of the things that I can’t take, a lot of times when people do remixes the singing is all off-key, it just bugs me. So it was a process, every time I did one, I had to take a rest, it took a while but it was gratifying when I finished one song. If I made it similar to the original I was happy, I didn’t want it to be too, too different. [This was] my perspective on the album, how I would have approached it, it I was like ‘Alright, if he approached me to do the whole record wanting the same beats unconsciously, what would I give him?’ That’s what I was trying to attack and trying to get at. I tried my hardest, you know.” While Preservation’s remixes are often immediately gratifying on their own, their construction often features an additional layer of intellectual depth, the sample he’s sourced for his remix of the J Dilla-produced “History” is, for example, a different version of the same song that Dilla first used.

Yasiin Bey’s Input On The REstatic

Though the production of the REcstatic was very much a solo endeavor—obviously with some relevance to their shared live performances—its creator also admitted that Yasiin himself greeted the project graciously: “I mean, it was just open arms. I was telling him little by little, ‘Yo, I’m doing some of the remixes,’ and I played a couple here and there. When I played him the record, it was like, ‘Oh, I like this one, I love this one, that one’s great,’ but no comment on a couple. I’ve been his friend for a while so I know for the most part how he reacts to certain rhythms and sounds so it’s like if there’s no words, I’m like ‘Alright, I don’t think it’s bad to him, but let’s just say it’s not hitting him straight,’ and that’s normal, that’s music, everybody has their own feeling when a sound hits them. But for the most part, I think it was just like him letting me doing me musically and touching on a record, again, that was close to us. And I was doing it regardless [laughing], I was just like ‘I’m this far, I’m going all the way,’ I’m not just gonna have like four or five remixes and not do the whole thing. That was my stubborness. It’s a Mount Everest kind of moment within all arts, a full project or someone putting up an art show or running a triathlon, that goes without saying, but [this] was kind of a challenge as far as what I do.”

Preservation’s final parting-gift comes in the form of the REcstatic’s closing number, a simultaneous treat for fans and a final admission of the smallest of defeats: “As far as ‘Casa Bey’ was concerned, one of the reasons that I put [this version] was because I couldn’t remix the original. [Laughs] I tried and I would have to get a band to re-do something and there were talks about it, I was talking to a couple people to put things together—like Chris Dave made a couple remixes, I sent him a couple acapellas, there was a couple other acapellas that I was sending out to people to hear what their approach was on it. I was thinking, the only way I would do ‘Casa Bey’ would have to be with a band because it’s just these large sections of that song and the tempo’s just not locked in. [This version], ‘Black Fantastic,’ he had done and I thought he was going to it put on the album, and I just love that beat so much it, it’s just this kind of [DJ Premier-esque] kind of ‘95-like thing, I was just disappointed that no one really got to hear that when The Ecstatic came out. And he loved it too, he really liked that version. That mantra that he keeps repeating was in there, and he was looking for [other] beats for those particular words to really match perfectly and he found it with the Black Rio [record] that was given to him by an emcee from Brazil, so he found it with that and he stuck it perfectly. Sometimes you don’t need to remix anything [laughs], sometimes it’s as good as it is, don’t touch it. And I’m a firm believer in that too.”

“Black Fantastic” is the only track on REcstatic not credited to Preservation (producer Minnesota of the group Money Boss Players is the responsible party) but its inclusion here organically adds to the project’s end-appeal: “that’s a special kind of—I miss those things from in the day, you used to get a lot more of those little nuggets of music that pop up, like a demo version of EPMD’s ‘Rampage’ with LL [Cool J] on the middle of the track talking shit and then jumping back in, like little things like that where you’re like ‘ooh shit!’”

Despite his weighty credits as a deejay/producer/visual artist, Preservation has maintained an incredibly sparse public profile. REcstatic is no doubt a passion project, but it has also granted the producer a worthy platform to step into the public eye as he prepares the launch of his own record label, Mon Dieu, and its first release, his official solo debut, Old Numbers. That project is built out of past unreleased collaborations with artists like Edo G, Jean Grae and, as expected, Yasiin Bey.