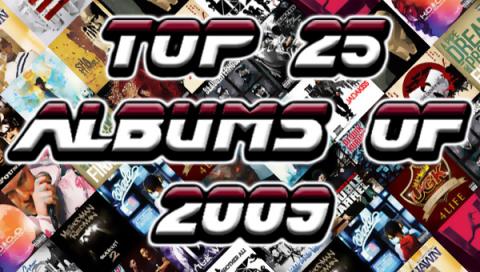 In 2009, HipHopDX reviewed over 225 albums from your favorite artists. Of retail-released albums, here is the staff’s annual end-of-year pick of our Top 25. Hate it or love it, nobody covers Hip Hop releases like DX.

The Truth Is Here by Brother Ali

Releasing two original studio efforts and having both be worthwhile listens is never an easy feat – case in point, I Am… and Nastradamus. Regardless, a few driven artists have been able to put out multiple studio projects in under twelve months and still have both be exemplary works. Brother Ali is one of these artists with his early ’09 EP and DVD The Truth is Here. Ali glides over Atmophere producer Ant’s diverse production, effortlessly switching between politically-minded tracks like “Philistine Dave” and battle-ready cuts like “Talkin’ My Shit.” Even though it’s only 9 songs, it’s all Brother Ali to show that he is indeed the truth.

Boss Of All Bosses by Slim Thug

Leaving a major label situation and Pharrell Williams, few expect Slim Thug to shine to the extent he did with 2005’s Already Platinum. With an endless list of H-Town collaboratives, Thugga packed the kind of heat that built his name years ago through Swishahouse. With Mannie Fresh and Jim Jonsin coming in, the tall, often emotionless emcee created radio-friendly Pop hits that were lighter than the Atlanta and New Orleans contemporaries – a welcomed distinction. Along with UGK and Z-Ro, Slim Thug delivered a strong album with his city in mind, and though he’s still not platinum, he remains a surprise to skeptics.

From his days as Zev Love X with KMD up until the present, DOOM has always shown a penchant for the unconventional and downright weird. He returned from his hiatus and rumors of sending a DOOM imposter out with an album that included everything from Charles Bukowski references to “Batty Boyz.” The latter of which what may be Hip Hop’s most homophobic song since Brand Nubian’s “Punks Jump Up to Get Beat Down.” It was nonsensical and possibly career-suicide for anyone else. But for DOOM fans, it was a welcome return.

Two Essential Tracks:
1. “Da Game Been Good To Me”

Pimp and Bun have been making records this good for nearly 20 years. It took Houston blowing up in 2005 and Bun starting his lifetime of guest spots before most took notice. Their formula hasn’t changed since The Southern Tape, still “smokin out, pouring up, puttin’ dick up in yo slut” over country ass, southern fried beats. When you’ve got as much talent and character as these two, the result is always entertaining. With the passing of Pimp C this will the last true album from the Port Artur legends, and even though Pimp died before it’s release UGK 4 Life was thankfully, all celebration.

The Last Kiss by Jadakiss

(featuring Ayanna Irish) (Produced by Neo da Matrix)
2. “What If”

While many expected Jadakiss to get the Freeway treatment from Def Jam, the D-Block star made an album that fit nicely in his catalog – while remaining one of the best-selling Rap releases from the historic label. Originally titled Kiss My Ass, Jada really flexed his “I just don’t give a f*ck” muscle and it provided near perfect results. Even in the midst of R&B hooks by Ne-Yo on “By My Side”, Jazmine Sullivan on the controversial “Smoking Gun” and Faith Evans on the B.I.G. tribute “Letter to B.I.G.” Jada kept his raw honesty in tact and gave himself some elbow room in the Top 5 D.O.A. For one of the last rappers who still rhyme as an occupation, Jadakiss doesn’t need tenure to ensure his career will outlive most mic controllers.

A Pipedream & A Promise by Finale

Once a Rawkus 50 emcee, Michigan’s Finale left a Big Three engineering job to become of the best emcees in the year his auto industry fell apart. Backed by some of the finest producers from the DMV, LA and the “murder mitten,” this album fulfilled its promise. Like Phat Kat before him, Finale attacked beats, as heard on “Heat” and “Style.” Morever though, his substance on the pensive “Issues” challenged the convention of Rap songs, and told stories with a dynamite voice. With assistance from Cold Crush Brothers alum and The Blackbyrds, this album was one of the more history-minded releases that still refused to sound like a throwback. Like Elzhi last year, Finale is a wake-up call that Detroit has some of the best emcees in the game, and few maintain a lower profile than this.

With Relapse, Marshall Mathers made one of 2009’s best-selling and most critically acclaimed albums, despite being in what seemed like lyrical cruise control. Even die hard Eminem’s fans were caught off guard by his rehashed topics of drugs, celebrity bashing and his acquisition of what seemed to be a Swedish accent. Em himself even admitted to not being completely back on his game during the initial recording stages. But when he rounded into back form he was as introspective (“Deja Vu”) and scary (“Stay Wide Awake”) as ever. When everything worked, Eminem rapped circles around any emcee on or off the charts–for further proof, see his verse on the “Forever,” which was recorded after Relapse. Considering he wasn’t back at full-strength, that either speaks volumes of Eminem’s raw talent, or it’s a sad indictment on the current state of mainstream Hip Hop.

Having been birthed from grimy, early-90’s east coast Hip Hop, Redman and Method Man’s crossover attempts have always been hit or miss. They hold the distinction of being two of the few rapper/actors who have done songs with SWV without instantly having their hood passes revoked. Blackout 2 proved Meth and Red are both better lyricists and businessmen when they opt to stay on the subterranean side of things. They might have experimented with Auto-tune on “City Lights,” and invited Saukrates to sing the hook on “Ayo.” But the remainder of the album found them sticking to a successful script of funny one-liners, shit talking through a haze of weed smoke. They didn’t reinvent the wheel, but when you have the track record these two have, you don’t need to.

Upon losing Dilla in 2006, the Hip-Hop world was left wondering how much work was completed by Dilla before his untimely passing. Jay Stay Paid, compiled by Pete Rock and Ma Dukes Yancey was a masterful edition to the James Yancey legacy. Jay Stay Paid hones in on Dilla’s abstract artistry and showcases skills of emcees like Black Thought (“Reality TV”), Raekwon, Bun B and Havoc that we had never witnessed before. A tragic loss to not only the Hip-Hop community but the world in general, Dilla left a void in the quality of music being brought to the forefront. Jay Stay Paid is yet another reminder of the legend gone too soon.

Let’s face it: hardbody Hip-Hop in 2009 was pretty much Detox status. Those who once proudly touted slanging and gang banging quickly flipped the script on listeners, now opting for nuthuggers, Air Yeezys and Lady Gaga over Champion hoodies, Timberland boots and knocking Premo beats. One group, however, reminded fans exactly what Hip-Hop used to be when it wasn’t all about 808’s and heartbreaks: Marco Polo and Torae, with their collaborative LP Double Barrel. Tor and Polo wreck havoc on the ears, with a gun-in-your-face level of mic control and beats that hit harder than Tiger’s wife with a 9 iron. The title “double barrel” doesn’t even begin to describe the explosive energy these two heads have in the studio. With an onslaught of bangers like “But Wait,” “Coney Island” and the Masta Ace and Sean Price-assissted “Hold Up,” Double Barrel was the barrel of a gun jammed in the back of Hip-Hop.

After both surpassing the 30-year-old marker, DJ Quik and Kurupt had a crucial decision to make. They could’ve easily either joined the club of emcees who make ringtone music for people half their age, or tried to recapture the fire and brimstone bars of their youth. They neither, as BlaQKout showcases them opting to find the grey area between yesteryear’s khaki/Chuck Taylor combo and the vaunted linen short set and sandals that we associate with retirement. Tracks like “Fuck Y’all” prove that they still have the bite from the early 90’s. But the bounce displayed on “Hey Playa” and “Do You Know” prove they don’t always need to use it anymore.

The Ecstatic by Mos Def

Mighty Mos came back with a vengeance in 2009. Now a seven-figure Hollywood actor, the UTD alumni went back to the underground for assistance on The Ecstatic. This time though, Mos traveled to the Stones Throw supplies, the Brothers Jackson (Madlib and Oh No) for an album as unique as Mos’ lyrical musings. “Revelations” appeared to be Mos showing his DOOM influences, while “Life In Marvelous Times” was an optimistic poet, making a positive proclaimation out today’s recessive economy and social attitudes. This album was truly a thought-provoking and uplifting effort in a year that either focused on rappers rapping about Rap, or pushermen left and right. The Grammy Awards committee acknowledged the artform, and just like Q-Tip’s The Renaissance last year, a wise veteran set a high standard for ’90s babies to ever top. Although the record was submerged in limited press and marketing, Dante, like Eminem, made a hugely successful career starting with cipher appearances and staying true to self.