Kendrick Lamar says he and the rest of Black Hippy got some insightful advice when they met up with Eminem in Detroit earlier this month. Eminem “gave me the game on how to stay as creative as possible,” Kendrick Lamar says during an interview with MTV News. “Always stay true to the craft, really. Everybody knows Eminem’s penmanship is insane, so I think, for the most part, he focused on that as much as possible. That was the game that he was giving me and my crew. Always stay focused on the craft and not indulge in all the other crazy stuff that comes around.”

Kendrick Lamar says that he was a fan of Eminem’s before he was in the music business, so he was particularly pleased that Eminem told him that he was a fan of his debut album, 2012’s good kid, m.A.A.d city. “He basically told me albums haven’t been done like that in a long time from a new artist, and he can appreciate that, how I structured the whole thing,” Kendrick Lamar says. “That was just one of the notes I took out of his book, how to [construct] songs, so I told him that.”

Even though Kendrick Lamar and Eminem are both Aftermath Entertainment recording artists, their meeting, which also included ScHoolboy Q, Jay Rock, Ab-Soul, Mr. Porter and Royce Da 5’9, was not planned. “It was unexpected,” K-Dot said to MTV News after his performance at the Firefly Festival in Dover, Delaware this weekend. “I just went to Detroit and I had a show out there and I got a call saying, ‘Em [wants you] to come to the studio, come to the studio fast.'” 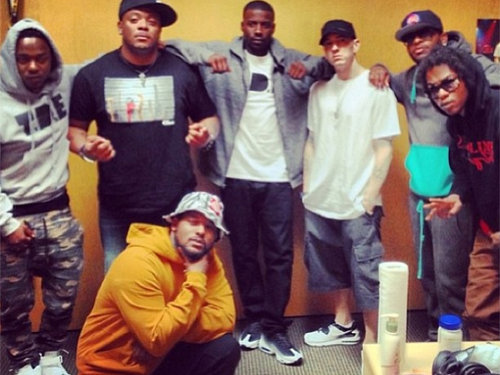 Kendrick Lamar says that even though he did not record any material with Eminem and that he did not did not hear any of Eminem’s forthcoming album, he was just glad to meet the Shady Records rapper. “I bumped heads with Eminem [in the past], but it was very brief,” Kendrick Lamar says. “That was my first time really chopping it up with him, getting to ask all the questions I wanted to ask him.”