Kendrick Lamar is going around the world in 80 days, literally. Well, not literally but the Compton native will do 60 shows in 15 different countries for his good kid mAAd city album.

This summer, K.Dot will hit cities all across the world. Everything from Belle Vernon, PA to Paris, France will be on the docket for the Black Hippy member. All of his TDE counterparts will join him as ScHoolboy Q, Ab-Soul and Jay Rock will accompany Kendrick for the U.S. leg of the tour.

The tour starts May 5 in West Palm Beach, FL and will end at the Hip Hop Kemp Festival in Hradec Kralove, CZ. Notable festivals that the tour will see include Bonnaroo, Wireless Festival, Lollapalooza, The Govenors Ball and inaugural BET Experience.

See the full tour schedule below: 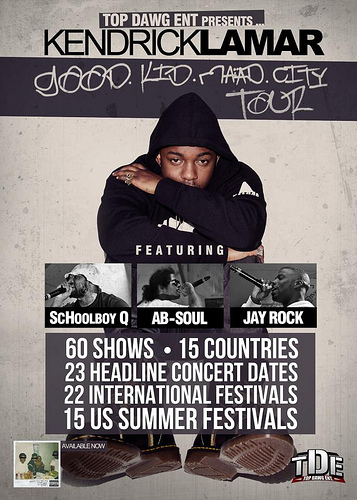