Lil Wayne’s Tha Carter IV will digitally release in just hours, potentially setting up another platinum-in-a-week run like its previous volume, but three fellow 1990s veterans are also putting in work on new albums. One Army of The Pharaohs veteran upholds his rich tradition of emceeing, while a Wu-Tang Clan affiliate unloads a colorful visual from his solo debut album – 18-plus years in the making, as a Brooklyn emcee who’s joined Wayne in Just Blaze’s production discography drops a new record with strong commentary on something that the HipHopDX editors definitely can feel…

Much like Vinnie Paz‘s  Season of The Assassin album, Honkey Kong , the latest from Connecticut emcee Apathy,  sees an underground veteran finally matched with a production roster that is on par with the lived-in golden age quality of his rhymes.

And even though our slept-on cut “Fear Itself” comes midway through Honkey Kong, it is essentially Apathy’s manifesto, a way to get the uninitiated up to speed and reinforce some things for those who may have forgotten the terrain. Ap’s rhymes aren’t peace-and-love backpacker rehash, but at the same time the “metal in the waist band” isn’t an accessory for hugging the proverbial block. Rather it’s for forest dwelling because the streets corners just have too many cameras. And where plastic rappers pretend to hide out in places like St. Tropez and South Beach where they’d be even more conspicuous, Ap chooses Cape Cod a region that truly is dead 2/3 of the year. And in Honkey Kong‘s world, country clubs aren’t for flaunting a new income bracket but strictly for “gathering info.”

Now all of this would be completely pointless if it didn’t have a beat that rocked like a Bohemian Grove party crash. Never has the Soul Assassins whisper and a DJ Muggs beat felt more reassuring. Only Muggs could sample a clip from the 1981 film Excalibur along with well, the most famous speech of the last century, and not get his beat shown up. Muggs can be credited as one of the few producers who has maintained not just the grimy unpredictability of Rock & Roll but also its tangibles, crafting a song in the studio side by side with an emcee. As he has done with all of his production work – “Fear Itself” now included, Muggs builds his beat around the ebb and flow of a specific rhyme style adjusting the vibe from medieval gloom to basement chess match to rusted out spaceship as needed. As Apathy spits his bars and the organs swell in reverse and the drums gallop behind the beat, you realize off-kilter has never sounded so smooth.

Listen to “Fear Itself”

“The throne’s occupied. That’s fine, I don’t wanna watch.” A line like that could be perceived as a punchline from a bitter emcee, but in Sha Stimuli‘s  case it’s not. Sha’s been punching the pavement full-fisted for longer than most rappers’ careers. One thing he is never guilty of is being at a loss for good rhymes. On “140 characters” he stretches a metaphor of 144 dudes (12 dozen) on his block trying to come up and that being more than 140 characters with Twitter not giving him enough space to speak in 140 characters. Get it? The track is actually a handful of Tweets in a way, where Sha spits little random thoughts that make so much sense, from rappers jumping on someone else’s track (“sloppy seconds”) to being chastised for being too skinny, but when he comments on an overweight person, he’s at fault: “How come people can say: ‘Sha you look skinny! Scrunchin’ up they face like I’m on dialysis. But if I see someone the same size as Biggie and say, ‘Damn dog, you lookin’ fat as shit.’ I’m wrong.” His combination of flow and sharp short wit make this track something to retweet.

With his first nationally-distributed appearance on an album dating back to early 1993 (“Hello, It’s Me), Wu-Tang Clan affiliate/Royal Fam leader Timbo King is finally getting a solo full-length release in this month’s From Babylon To Timbuk2 release. The Nature Sounds Records artist called on his label-mate, and frequent collaborator R.A. The Rugged Man for “High Ranking.” As always, R.A. makes the video dope, as the pair made the ultimate children’s video, with adult-minded humor. The Brooklyn-to-Long Island collaboration features two emcees with reputations for gettin’ gully, having fun and being light-hearted. The rhymes punch, not fists in this underground single (over a soulful Bronze Nazareth beat) from a hard-working emcee getting his. Hear one of the LP’s sharpest moments, with a stellar visual. 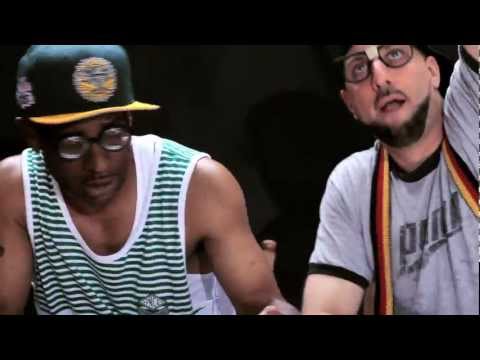