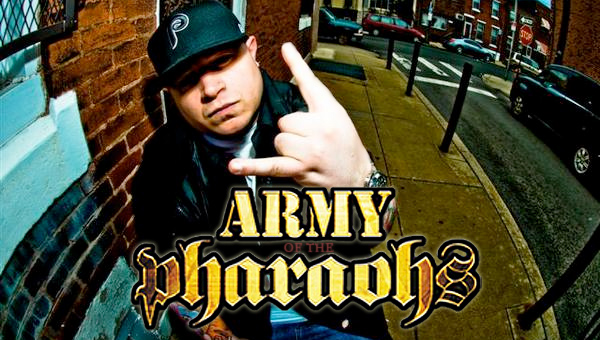 Underground Hip Hop super-group Army of the Pharaohs released their third album, The Unholy Terror earlier this week. The group, started by Jedi Mind Tricks emcee Vinnie Paz over a decade ago presently includes emcees such as Connecticut’s Apathy, Florida’s Celph Titled, Massachusetts’ Esoteric, Brooklyn’s Block McCloud and a large Philadelphia delegation. Asked about how such a spread out group maintains such an authentic sound on their records, Vinnie deduced, “I think the fact that we have long-standing relationships, dating back as far as 15 years, really. We’re all of the same mind-state and mindset, and sort of all have the same approach to how we make music, it’s a little bit more organic than those type of records that seem forced. I think that’s really, what it all comes down to. We’re all on the same page. When that’s the case, you can be 10,000 miles away or 10 blocks away.”

The hardcore Hip Hop emcee told HipHopDX that communication adds to the connection in the music. “Me and Celph [Titled] will be on the phone before we get into the lab, and then, from there, it’s still organic – even though we’re both not physically there.”

Within Unholy Terror, both Vinnie and AOTP brother Reef The Lost Cauze drop several sports similes touching on Philadelphia’s first sports championship since 1983, courtesy of the 2008 Phillies. A consummate underdog, Paz was asked if the underdog mentality still exists in the city’s Rap community as it has in athletics. “Absolutely. We’ve always been the type of city that’s always been the little brother of New York. We never really had or got the respect that was [deserved]. We never really got our just due. So I kind of feel like we always approach it as the underdogs, you know?”

The veteran rapper spoke to DX from Newport, Kentucky on Tuesday night, kicking off the Jedi Mind Tricks/Army of the Pharaohs tour. The day of the album’s release, and Vinnie Paz revealed that unlike many live Rap acts, he sees no pleasure in performing new material to virgin ears. “It’s just out today. We really haven’t been doing anything off [The Unholy Terror] yet,” Paz said after being asked about the album’s best-received track. “We never really have done that – even with the Jedi [Mind Tricks] stuff. We kinda let people build with the record a bit before we rock. That’s not an approach that everybody takes, but it’s one we’ve always taken. I feel like newer material isn’t always received if they’re not familiar with it. Familiarity is an important thing when it comes to live music.” The fan in the emcee may have been what instituted this unwritten, but honored rule. “Being in Hip Hop shows since the late ’80s, it’s just something that I [experienced]. I never liked hearin’ new material. I liked hearin’ it on my headphones or in the car first. Then I’m familiar with the music, and then hear it live and appreciate it.” Having a catalog that dates back as far as 1996, Vinnie also recognizes his paid dues in the ability to carve performances. “The flip-side of that is that we’re lucky enough to have a catalog like we do, of nine-plus records of Jedi and Army of the Pharaohs. We’re able to do that, whereas a lot of people don’t have more than a fuckin’ twelve-inch out.”

The Unholy Terror is released through Babygrande Records, a label that Vinnie and his outfit have worked with for close to a decade. After some public disputes about money and the handling of the Jedi Mind Tricks’ catalog, many believe that this project could be one of the final label/artist collaborations. Although Vinnie did not speak on his future with Babygrande, the emcee did explain that he asserts control along with his brothers in maintaining their musical integrity. “Regardless of the problems we’ve had, the bottom line is we’ve always, always, always kept creative control of the record. We would never allow the label to have any – and I mean any say in the creative process.” Vinnie did allude to the fact that his conglomerate is headed for independence, reminiscent of Jedi Mind’s rise to prominence with their own Superregular Recordings, “Now, we’re back to putting out our own shit. This is the happiest we’ve been in a while.”

With their Enemy Soil imprint, Vinnie and his crew have a slew of releases planned for the next two quarters. On the heels of his leaked collaboration with The Clipse, “Street Wars”

Looking at his summer solo debut, Vinnie was asked about his collaboration with legendary emcee/producer Lord Finesse, who’s worked with the likes of Dr. Dre, Notorious B.I.G. and discovered and mentored the late Big L. “[Lord] Finesse is just the coolest guy in the world,” Vinnie said. “Him being a product of that late ’80s, early ’90s shit, and he’s still relevant and making good music, I think there’s a part of him that wants to stay relevant with the younger generation. I went to New York. [DJ] Premier bought the old D&D Studios, it’s called HeadCourterz, that’s where Finesse works out of. Me and Crypt [the Warchild], my brother from Outerspace, we just went up there and kicked it with Finesse. We just hung out all night, drank 40s and shit. He basically crafted me like three beats, specifically for me. They were all amazing, [but] I only ended up using one on the record. But we talked recently, and we’re definitely gonna work again this year on something.”

UPDATE: The tracklisting for June 22’s Season of the Assassin is as follows:

Purchase Army of the Pharaohs: the Unholy Terror