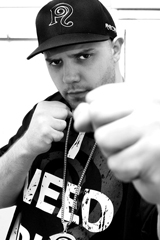 Some of us might consider Necro a gore-rapper, but he certainly doesn’t. Raised on the raw, precise lyricism of the early ’90s emcees, the Brooklyn-born rapper believes that sex, violence and drugs is human nature. Whether or not that’s healthy, all three elements have littered Necro’s past and his art. The emcee, producer and CEO clearly makes sense to many, because after releasing albums the last eight years, he’s playing nightly shows with Insane Clown Posse, and recently released the Koch-distributed Death Rap.

HipHopDX would be lying if we said we didn’t speak to Necro in celebration of Halloween. However, once we got on the phone with the rapper with the ferocious lisped delivery and grimy beats, the artist made a case why he shouldn’t be pigeon-holed – by the media, by the fans, by Hip Hop. With Master P as his inspiration, Necro says he’s not stopping until he’s as big as 50 Cent. One thing is clear, each bar and each beat will take him there, the ski mask way.

HipHopDX: To what extent was the Brooklyn, New York of your youth a scary place?

Necro: The first time I moved to the projects, I was six years old. It was a fuckin