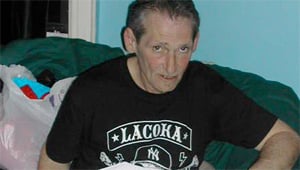 Throughout many releases in the camps, Howie appeared on interludes, commercials, webisodes and DVDs. Late last week, Bill confirmed through Twitter (@IllBill1972) that his uncle had passed away. “Uncle Howie RIP – Rest in power my G,” part of the message said.

The cause of death is unclear, though Howie had reportedly been sick for some time.

In October of 2008, Ill Bill told DX about his relationship with his uncle, after recording a dedication track “My Uncle” on that year’s acclaimed release Hour of Reprisal.

DX: With the song “My Uncle,” how do you set the tone so people can understand how much this person, struggling with an addiction a lot of the Hip Hop community laughs at, means to you?
Ill Bill: I can only do that by doing interviews or putting it into the music the way that I did. I’m trying to really illustrate what my thoughts are and where I’m coming from with my uncle with this song. That’s a big part of why I did that record in the first place.

It’s hard to really do that. Unless I’m having a one-on-one conversation with somebody, it’s hard to do that. Part of the reason I put the skits on the record is really to just give my uncle some [positive mental attitude]. Dude is going through it. He’s relapsed numerous times since he was living with me. He’s really just not doing the right thing. The back-story on that song was that I did it for him. My intention beyond that was open-ended; I didn’t know if I was gonna put it on the record or not. I didn’t want to embarrass him. I’ve never really went that far; I never got that personal, as far as my uncle goes. He loved it. He told me he’d be upset with me if I didn’t put it on the record. It’s hard to really talk about, but dude walks around if he – knock on wood, man, he’s still here, but he walks around as if he’s gonna be dead tomorrow. That’s just his attitude, and it kinda fucks my head up to even think about it. He appreciates his life less than I do.

DX: He’s always been credited as your manager. Regardless if there’s utility in that role, does that mean a lot to him?
Ill Bill: You know what? [Laughs] Just to clear the air on that one, he’s the furthest thing from managing anyone, let alone his own life, but I mean, he’s like our spiritual manager. Beyond that, he’s been my conscience through my life. When I get to that fork in the road, I always tend to make the right decision. I give a lot of credit to my uncle for that.

HipHopDX extends our condolences to both Bill and Necro, as well as Non Phixion and others who knew him. May Uncle Howie’s legacy live on through music, stories and the label named after him.