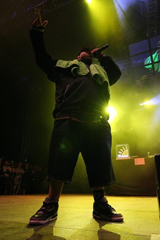 With released demo tapes back to 1991, Ill Bill has put a lot of stock into his future. It’s been a long time coming, but the appointed leader of Non-Phixion has constantly topped himself with each work. At a time where Metal, Punk and Hip Hop culture have melded together in fashion, dance and nightlife, the Brooklyn emcee and producer delivered a critically-acclaimed companion album, The Hour Of Reprisal [click to read].

Ill Bill jokes that he can make 20 songs about “robbing your mother” in two hours. But at this point in his career, the husband and father has taken his defiantly street messages and twisted them a bit differently than he was a decade – or two ago. Bill explains the hope he has for his uncle overcoming his addiction, or the jewels he acquired from Bad Brains first as a fan, then serenading his daughter. Society may be brainwashed, but albums like this are offering some rap fans the truth serum.

On tour with longtime partner DJ Eclipse, Ill Bill spoke to HipHopDX from a Motel 6 parking lot, with a busted van and could-be classic album he’s hand-delivering to fans. One of the greatest Hip Hop stories of 2008 opens the book and shares knowledge.

HipHopDX: Of all the lines I