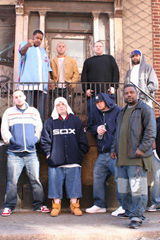 Army Of The Pharaohs: Indie Kings

Deep in the underground lies a slew of talent known as The Army of Pharaohs. Independent emcees Vinnie Paz, 7L & Esoteric, Celph Titled, Outerspace, Apathy, and others have joined flows and beats to create a powerful union amongst like-minded rappers and producers. With various solo projects on the way, the crew managed to hook up and put together an indie dream team of sorts.

Group members Esoteric and Planetary from Outerspace gave DX the inside scoop on their long awaited debut as a crew. Furthermore, the two emcees opened up about wack rappers that should be abolished, racism in Hip-Hop and shed light on Hip-Hop essentials for the youth.

That Army of Pharaohs is coming out soon. Can you explain what your intentions and hopes are for this release?

Planetary: I hope that everybody likes the music because that