During the 2000s, the Beat Society producer showcase gave fans an in-depth look at some of Hip Hop’s top beatsmiths, including Kanye West, Just Blaze and Marco Polo. Now, the fabled producer showcase will return to New York City this February after a five-year hiatus.

Presented by Soulspazm Records and Native Instruments Maschine, the showcase will feature a number of MPC heavyweights, including Nottz, Buckwild, Roc Marciano, !llmind, DJ Revolution and Khrysis, in addition to appearances from emcees Danny Brown and Malcolm&Martin. Stef Tataz and Sao are set to host the event, with DJ Evil Dee of the Black Moon and Da Beatminerz on the wheels of steel.

The Beat Society showcase was first introduced by Soulspazm Records in 2002 to highlight the methodology and importance of production in Hip Hop. Over the years, it grew into an internationally known event, with its showcases taking place in Los Angeles, New York, Philadelphia and other cities.

“To be considered for Beat Society and share the stage with some of the most talented Hip Hop producers of our time, is a honor in itself,” said veteran producer DJ Rhettmatic. “It shows that you have gotten respect for your work, from your peers and music associates. That in itself is more worth than gold.”

The Beat Society showcase is set to take place this February 12 at Tammany Hall in New York City. A flier for the event can be seen below, and tickets for it can be purchased at the event’s website. 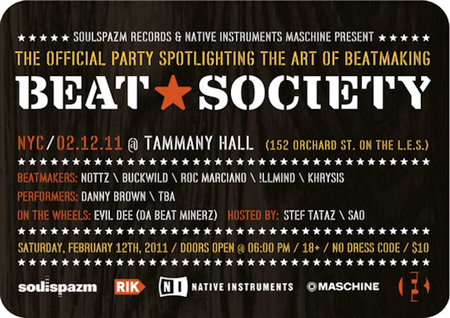