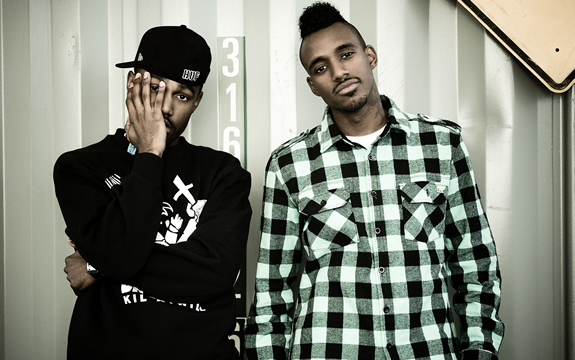 DXnext alumni Thurzday and Y-O of U-N-I spoke to HipHopDX this past Thursday (February 25th) to provide some pre-album details regarding A Love Supreme 2.0, the March 9th retail re-release of their sophomore street album. The Inglewood, California duo also responded to Ice Cube’s new album announcement that has set off a firestorm of debate over the onetime N.W.A. lead emcee’s self-declared lead role in reinstituting “West Coast gangta shit.

“We both felt that there was a lot more heads out there that had no clue who U-N-I was, what the U-N-I sound was about,” explained Y-O to DX of the motivation behind the 2.0 release. “And, with the help of iTunes now it can just be online forever, so whenever somebody hears the name U-N-I – they may be a new fan and come to a show – they can go to their computer the same night and be able to purchase it with a couple of bonus songs that we didn’t put on the first release. And just [for] sample reasons we had our band replay most of the songs that had samples in [them] so that didn’t bite us in our ass in the future.”
Added Thurzday: “After we released A Love Supreme we did a single deal with Green Label [Sound] and a lot of people that were catching on to [that single], ‘Land of the Kings,’ might not have heard A Love Supreme, thus re-putting it out and making it available at retail [makes sense]… We want them to hear a whole package of our work so we’re releasing A Love Supreme with bonus joints on there and calling it 2.0, with a documentary showing how we made the project.”

Anchored by a replayed version of the New Edition-inspired “Hollywood Hiatus (Cool It Now),” A Love Supreme 2.0 will boast a handful of additional retooled tracks (including “Supreme 2.0,” and a remixed version of “Land of the Kings” featuring Bun B) and all-new joints (including “Desha Dayana”

Thurzday explained that the group’s decision to repackage the album that they provided for free download nearly a year ago for a retail release was far from a marketing mistake: “Definitely no regrets about that, it’s really just all positive stuff as far as it’s all working for us and building up our brand for the official album that we plan to put out.”

U-N-I remained mum on details regarding their forthcoming formal debut due later this year, (as well as tight-lipped about the label they are in negotiations with to put it out), but they did reveal that their fans can expect to soon see a slew of recently-shot videos from the group for the remix to “Lately”

If those clips are anything like the throwback style seen in the Do The Right Thing-inspired video for “K.R.E.A.M. (Kicks Rule Everything Around Me),” the sneaker-fiend flip of Wu-Tang’s classic “C.R.E.A.M.” from the clever twosome’s first underground effort, 2007’s Fried Chicken & Watermelon, U-N-I fans, both old and new, are in for some true visual treats leading up to Thurzday and Y-O’s official first album.

Since they clearly eschew the style and sound of their Gangsta Rap forefathers on the west coast, U-N-I (who take their name from The Roots’ Common-assisted album-cut from 1996, “UNIverse at War”) were asked during their discussion with DX for their thoughts on Ice Cube’s recent announcement of his upcoming I Am The West album and subsequent statement that for the last seven-eight years the left coast “lost our way,” as well as his apparent declaration that he will be personally leading a movement to bring back the west’s original gangsta sound.

Added Y-O: “Ice Cube was definitely a part of the Gangsta Rap for the west coast, representing L.A., but to speak for now I just – I mean everybody knows, just backing up what Thurz said, it’s a new era and I believe it’s our time to get on the court and shoot the rock. I mean ‘cause [there’s] Fashawn, and outside of us is fuckin’…Kendrick Lamar, then you got Blu. So it’s like, everybody has their time. And even Nipsey Hussle, he’s in that lane but he doesn’t really glorify it like the way N.W.A. did and Ice Cube but… I think [Ice Cube’s comeback] is gonna get a few heads attention, but I think we have this music in L.A. on lock now and everybody’s just waiting to see what we’re gonna do.”

If Cube is successful in reigniting a Gangsta Rap revival in Los Angeles will that affect Y-O and Thurzday negatively, or will less street-oriented acts like U-N-I and their new school stylistic brethren be able to co-exist with the city’s original gangstas?

“U-N-I music is U-N-I music, like there’s no genre where you can box us in,” replied Y-O when asked. “And I feel like that’s not gonna hurt us in any way. I mean, if anything we can join forces and make this a bigger camp out here in L.A.”

After being reminded that back in the 1990s heyday of west coast Gangsta Rap the more casually-clothed everymen of The Pharcyde and Souls Of Mischief successfully co-existed in the same space as their flag-waving, Chucks-and-Dickies-suits wearing westside peers, (and that Hieroglyphics leader Del Tha Funkee Homosapien happens to be Ice Cube’s cousin), Thurzday added, “It can all definitely co-exist [now] but it’s not gonna be like… It’s definitely not just gonna be a gangster reign. It’s not gonna be like just a [time] for Ice Cube to take over the west coast. We are the new generation and the new – It’s like a renaissance right now, it’s just a… Gangsta music [has] had its period – and it’s still relevant, for dudes that live that life. But, more people are normal than gangsta.”

A Love Supreme 2.0 is due in stores and online March 9th from Traffic Entertainment/The Orchard