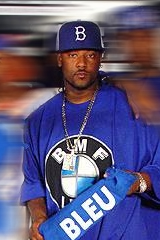 HHDX: Now I want to ask you how you feel about BMF being taken apart with all the drug money and shit?

B.D.V: See that’s where people get it wrong, it wasn’t no drug money poured into BMF Entertainment. People don’t understand that this crew has been on a legitimate grind for the last six years, Bleu Da Vinci gets $10,000 a verse. Bleu Da Vinci gets $7500 to come on stage in a selected city. Plus my producer S-Class gets ten or fifteen stacks every time he sits down at the MPC for a label or company. So you know we been moving on the streets, when I drop a mixtape I sell 25,000 mixtapes and we been moving like that for the last four years. A lot of people wanna use our talent and our well being with our grace in these streets with this music game (and) they wanna turn that into drug money. They making it seem like niggas don’t get out here and hustle, no more like everybody else do ya feel me.

HHDX: So how you get affiliated with BMF Entertainment?

B.D.V: I co-founded BMF Entertainment, what the media done said about BMF and all that is wrong. Everybody thinking about all that drug money or whatever, but that ain’t what it was about. BMF was created by Meech and myself, all them other people said BMF was in the 80’s which is not true.

HHDX: So you feel when people say most of your promotions came from drug money, especially with all those fly cars ya’ll had and shit?

B.D.V: Right, see one thing you gotta understand is you got to separate what you talking about first of all. If you knew who BMF Entertainment is you would give me a roster of artists and people that work under BMF Entertainment. You could be talking about any set of people in the streets, you gotta understand (that) with the BMF movement has done was spread like a plague. What it is now is that it’s cool to be able to say you down with BM. Put it like this one of my artists is from up out of Atlanta, but he’s BMF. When he goes to the club with his people in Atlanta and do whatever they do, all them niggas that’s with them is considered BMF.

Now at the end of the day when everybody’s rocking BMF T-shirts, we giving away 10,000 shirts for promos, the kids and all that. So when five of his homeboys got on BMF shirts and get into a fight at the club that was BMF who got into a fight. What’s strange about this whole thing is how I always hear everybody jump up and wanting to talk about drug money and all that shit, but ain’t nobody talking about The Source Award nomination in 2004. Nobody is talking about the records, the videos or the 600 spins on the radio or anything like that nothing about my buzz on the street as an artists. That’s what were doing- we’re getting too far away with what this thing really is.

This fascade of drugs and that whole thing, that ain’t what BMF Entertainment is about. That’s what everybody got to get through their thick skull, that’s why I’m doing these presses and all this, to let people know that drugs is not what BMF is about at all. I don’t mind people asking these questions cause they need to know, but my thing is (that) nine out of ten people that’s in music or doing these interviews on these artists and stuff like that, when you talk to any of them that come from the streets you don’t talk to them about drugs or who got locked-up from the street or who from they crew got indicated or none of that. You go talk to them about they single, they video, along with the artists they work, who they like in the game, where do they think they style is, where do they think they fit at in the game and questions like that. This is BMF Entertainment (and) I never said that we gonna talk about what we gonna move and all that. That’s not what this is not about bro. We were just a bunch of brothers from all over the different states being linked-up with each other.

HHDX: I understand what your saying, but when I was doing my research on BMF ya’ll you hear is drug money, you know what I’m saying?

B.D.V: Right, but that’s my whole point where are you getting your research information from the DEA.com. That’s my point right there! They can’t tell you anything else about BMF money being drug money besides the police. People like these magazine people like Vibe and all that. They work with the police, they work with snitches and stuff like that cause that’s the only way you can find out about stuff like that. At the same time when you hear Bleu Da Vinci and you hear that Bleu Da Vinci is the president and the first artist on BMF Ent., you never hear drugs behind that. You never heard of nobody put in a situation with no drugs and that’s what I want people to understand.

HHDX: Yeah you right, cause you hear all this other shit like Jacob the Jeweler and Jimmy Henchmen was involved so it’s just been crazy?

What done happened is that we have let the media take this whole thing and turn it into something all bad that connects hundreds of people to my record label. BMF Ent. never started off being “Black Mafia Family”, BMF Ent. if you look it up and do your real research BMF Ent. was incorporated as BMF Ent. Not “Black Mafia Family”, not “Blowing Money Fast”, not “Black Man Future, none of that other stuff we called BMF. BMF Ent. had many names, it wasn’t “Black Mafia Family” that was the fans and them, along with the white people that jumped up and said “Oh that’s the Black Mafia Family” they do this, they kill and all that other shit. They ain’t do nothing, but try to wipe-out another crew of people that’s gonna come through in a major pave and put they foot in the game. They don’t want people like us in there, cause we real for number one. Anybody that know us can tell you, one thing about these dudes is they real. They ain’t coming through with they chest pumped out, but they real and they about they business. Now if a nigga had some business down there in Miami or some other shit that’s his business that ain’t got nothing to do with BMF Ent.

HHDX: So being from the hood, what’s ya opinion on snitches period?

B.D.V: I mean everybody needs to keep their mouth close you know, a snitch don’t have no place in society. Your momma even told you that when you was growing up “Stop Telling”, “I’m a tell my mom” and she go “Boy stop telling”, that’s just how we were raised where I’m from. Snitches nine times out of ten be lying to get themselves out of trouble. So nines times out of ten the shit that you be hearing be falsified and made up to get another nigga out of trouble. On my man Big Meech they ain’t got no evidence saying that he did nothing, he did nothing ever. That was all conspiracy saying that he probably was gonna do something or he might have did something or something like that. None of that is facts all that is people running they mouth saying “Meech did this and Meech did that”. At the same time you ain’t seen no newspaper that said Demetrius Flenory pulled out a house with fifty-two bricks and 200 pounds, you heard that they found the house with that, but it wasn’t Demetrius Flenory‘s house and the people they found in the house wasn’t BMF Ent. either. If you go do your homework for real and when the DEA got down these niggas was fifty years old. Forty eight and thirty nine years old, nobody from my crew that old, we all 21, 22, 23, 24, 25, 26 ya feel me?

HHDX: I feel you, so now I see you got an album coming out with BMF/Koch, how did the deal with Koch go down?

B.D.V: The whole thing about BMF Ent is like this, I’m a take you back and put you on for real. I got a mentor his name is DJ Pooh, he wrote the movie “Three Strikes”, “Friday” and he produced for Ice Cube back in the day when he was real hot. He put me in the movie “Three Strikes” so around this time I was actually working as I was an up and coming artist. This was like ’99 and I was an upcoming artist in L.A. and what happened was DJ Pooh knew Meech. At the time Meech was tryna put a record label together, cause he felt at this point and time he knew what it took to make a record label happen. He came to L.A. looking for some artist and got with DJ Pooh and DJ Pooh referred me to Meech.

Me and Meech we kicked it, hangin out and chillin hearing our different ideas on this music business. We came to an agreement to take it one step further and going to get some incorporated paper work for a record label and that’s how we came up with BMF Ent. Independently we was blowing money fast that was our whole thing, we didn’t just want to be blowing money fast, cause he looked up and said “We ain’t got that much money to be blowing money fast, so we just looking stupid, so we just gonna be Black Music Foundation”. Then once all the homeboys start checking for BMF to build the rep.

I got homeboys that crips, bloods, niggas that’s in the streets for real, not just claiming my nigga in the streets for real. So that’s when the Black Mafia Family thing came into line once we start going out thirty to forty deep. You look at it like this; on the bus you might got fifty people, but ain’t it like one of these niggas gonna drop a 100,000 for everybody… that’s ludacris. What happens is you got all these niggas from different states that come together go to a club, VMA’s in Miami and do whatever they gonna do together. You got your Chicago, St. Louis, Detroit, all these niggas clicked up together by being in Atlanta since it was in the middle and everybody from everywhere was there. Niggas was in the club and they was just fuckin with each other,