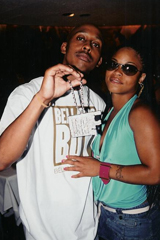 HHDX: Now you used to be signed to Cash Money and everything, why you not signed to them anymore?

Gillie:Cuz Stunna‘s (Baby) a rotten motherfucker and he don’t pay his niggas! It wasn’t never really a money issue with me. It was more of just Stunna didn’t really want a nigga to shine. He wanted a nigga to play more in the backround and get checks like that, so I did that for as long as I needed to and got out of it.

HHDX: How you get discovered by Cash Money in the first place?

Gillie: Seen them down at the First Union center at a concert. I was signed at the time and the nigga was like if you get off I got a S for you. So when I got off I called and he flew me down the next day and the deal got done that week.

HHDX: What you think of Baby and Slim when it comes to business, what’s your personal opinion on them?

Gillie: They handle they business to the best of they interest you know what I’m saying? They not good businessman because if you had the empire that they had you would do everything you could to keep it around. You would’ve kept it together, you wouldn’t let it break-up. A nigga didn’t give a fuck if it broke up or not cause he wanna be the main nigga, but he don’t have man nigga talent you know what I’m saying.

HHDX: So basically he just looked out for himself and others?

HHDX: What’s good with that shit with you ghostwriting for Lil Wayne, want to speak on that?

Gillie: I penned a lot of that shit, they had me around there. Nigga… Stunna gave me 200,000 when I signed. They was so in a rush to get a nigga into a deal they didn’t do the publishing right there on the spot, they just wanted to get me ink. Soon as they got me ink then they wanted to discuss the publishing. Once they didn’t want to give me the money I was asking for (for my publishing) then I knew it was a problem. I had talks and sit-downs with Wayne he didn’t even know what publishing was and shit, so I start seeing what was really going on around here.