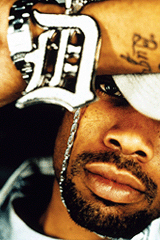 They say he fired first.

The drama unfolded early Tuesday morning outside the CCC, a bar located on 8-mile road in Detroit. It started as basic garden-variety club violence: an argument escalating to pushing- then shoving, and ultimately gunfire. It usually ends in a cleared club, perhaps an arrest or two. Unfortunately sometimes it ends in casualty, when someone looking for trouble actually finds it. On Tuesday, April 11th, Proof found his.

Details are sketchy, but according to the Associated Press, Proof allegedly shot Keith Bender, 35, in the head, and was then subsequently shot (along with another man) by an unknown assailant. The victims were taken to nearby St. John Holy Cross, where he was pronounced dead on arrival. According to Detroit police, Mario Etheridge, a 28-year-old bouncer at the CCC Club, where the shooting occurred, is now in custody.

For millions of Proof fans across Detroit and across the world that was the end of the story. Let