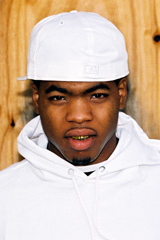 Louisana is known for several entertainment sources. Cash Money sprung up and went worldwide in the late 90’s. No Limit doused the nation with their brand of Hip-Hop a short time before that.

The infamous Jazz Festival is the breeding ground for musicians all across the world. All in all Louisiana has left it’s musical mark on the world thus far and there doesn’t seem to be any stopping the state from continuing to blow up in the future.

So when one speaks of the future of Hip Hop in Louisiana one has to mention Mr. Sweet James Jones and Trill Entertainment along with their newest sensation Webbie aka “The Savage”.

Webbie Born Webster Gradney In 1986 resides in the heart of Sherwood on the eastside of Baton Rouge, Louisiana. His 1st single “Give Me That” featuring Bun B of UGK off his soon to be released debut album Savage Life is in heavy rotation across the nation.

HHDX got the chance to talk with this self proclaimed savage youngster about journalistic misconceptions, Hip Hop, and the way a Baton Rouge gangster lives.

So Webbie tell me about the story thats going around about you and your cousin who used to be in a rap group together, what caused the breakup and made you go solo?
First of all that’s a bullshit story and that shit never happened. Somebody wrote that shit and it’s bullshit. My niggas is straight street niggas. They don’t give a fuck about this shit. (Hip Hop) Whoever said that shit had my people thinkin I went around and said some punk ass shit about me being better than my cousin rappin and I never said that shit. It aint like that. I just rap and that’s all. It’s all love between me and my people.

So how did your deal with Atlantic Records come about?
Me and Lil Boosie came out on Pimp C‘s “Ghetto Stories” CD and Mr. Trill (Sweet James Jones)did the rest. We sold like 15,000 copies and that was it. Mr Trill did the rest, he handles all of that shit I just rap and that’s how it happened.

So why did you choose Savage Life for the title of your debut CD?
Because I’m from Baton Rouge Louisiana, I keep a pistol on me everyday,I rap that gangsta shit and I’m a savage on Trill Entertainment.

So what are some things that Webbie likes and hates?
I gotta have me some killer with no sticks and seeds and I hate doing interviews.

Why do you hate doing interviews?
Because it’s too many questions and I be feeling like people be watchin me or something and I dont like people to know to much about me. Sometimes I feel like they know too much about me already and I aint like that. I’m a straight up gangster and I just rap that gangster shit.

What’s currently gettin’ play in your ride?
It depends, I like mostly gangsta shit cause that’s just me. But if I got a bad bitch with me in the ride I might listen to some R&B. But I don’t listen to my own shit. I like to listen to other shit not my own stuff.

So if you had one thing you could tell the public what would it be?
Nothing. because I told you I feel like ya’ll know to much already but gotta say free Pimp C keep ya head up man and when you come home I got you man. And all yall need to know is I’m a savage on Trill Entertainment and I’m gonna give ya’ll nothing but that gangster shit.

In the world of gangsters and street monarchs Webbie has his feet firmly planted. Only time will tell if his art will reflect life or if his life will reflect art. Either way Keep your ears and eyes open because you never know where The Savage will be or where Webbie will strike.

But for now he’s well on his way to a career that has been known to change lives and sometimes make people better. But the bottom line is that it has made some people worse. Which one will Webbie turn out to be or will he remain the same? We shall see.