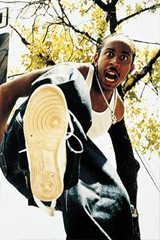 When you’re hot, you’re hot. And right now, at this particular moment in time, Def Jam South’s flagship artist, Ludacris, is white-hot. As he prepares for the November 6th release of his highly-anticipated sophomore album, Word of Mouf, the Atlanta resident is basking in the fruits of his labor.

At age 23, the rapper already has a double-platinum debut — 2000’s Back For The First Time — under his belt, and a hit single (“Area Codes”) currently blazing airwaves across the country.

Ludacris also has a way with the young ladies — who have turned the former nightshow radio producer into a popular ghetto pin-up. However, fame and fortune comes at a price. While some critics take aim at his mysoginistic lyrics, others simply don’t think he’s skilled at all. Despite his detractors, the artist formerly known as “Chris Luva Luva” just keeps on rollin’.

On this afternoon, he’s rollin’ through a Dairy Queen drive-thru somewhere in New York.

Your single “Area Codes” is a smash hit from coast to coast. What do you say to people who criticize you about using the word “hoe” and accuse you of disrespecting black women?

I’m not disrespecting women. I de-sexualize the word. And I’m not just saying that as a cop out. Women can call us hoes. I don’t know if you remember, but there was a song by 8-Ball & MJG called “Lay It Down.”

Well, they were saying, “You hoes lay it down,” but they were talking about men too. The word can be used for anyone. I just try to de-sexualize it.

As with anything else, when you get a little fame and notoriety, so called “haters” come out of the woodwork. How do you deal with them?

They just motivate me. Most of it comes from envy. Envy breeds jealousy and jealousy breeds hate. But what I’ve found out in this industry is that they [haters] are the real fans. They’re just envious. The ones that hate on you are really fans. They actually like your music or whatever.

Speaking of the industry, lately there have been a lot of high-profile beefs between Rap artists being played out in the media. We’re not going to say any names, but what are your thoughts on the subject?

I can’t really speak on someone else’s thing. But as for me, I’m a grown a** man. I really don’t pay attention to rumors. Like I hear that people say this or that about me or whatever, but if they don’t bring it to me, I don’t pay attention to it. Some people just overreact. Basically, any type of violence is ignorance.

Back For The First Time was basically a re-working of your underground release Incognegro. That was aimed at a regional audience. Now that you have fans all over the country, what are you going to do different for Word of Mouf?

Basically, I’m just going to be myself like I did on the first album. People responded well to that, so I’m just going to do the same thing. I just have more experiences to talk about. It’s going to deal with all the things that have happened to me in the last year. If you thought I had a lot of [freaky tales] on the first album, just imagine what’s happened since then. I’m even more crazy this time around.

Eightball & MJG, along with Outkast, are considered pioneers in the southern Rap world, what was it like working with them?

I’ve always been a fan of Ball & G. They can flip it from the pimping to the spiritual stuff on the same album. I had a check and I knew I wanted them on my album. And we all know they can talk about some hard times.

Right know you’re at the hottest stage of your career. Many artists, who blow up really big, are never really aware of what’s going on around them at the peak of their success. Do you ever sit back and try to soak it all in?

See, I never know when I’ve peaked because I’m constantly trying to elevate and improve on what I’ve already done. I’m always taking it to the next level.