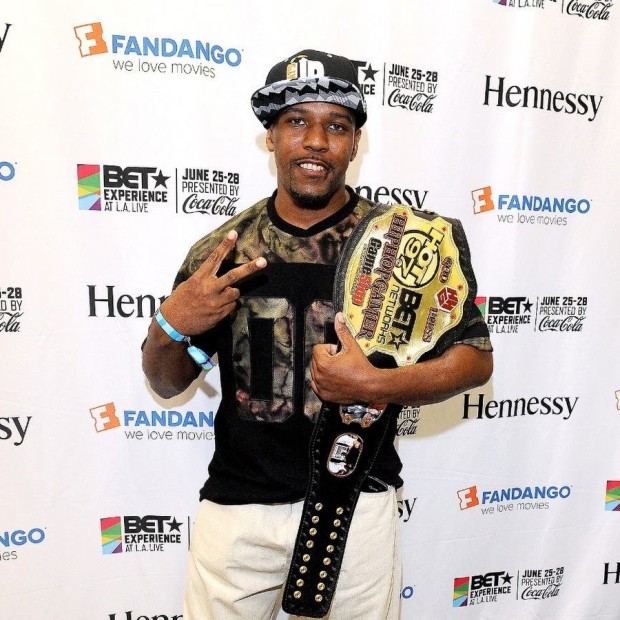 Gerard Williams has been playing video games since he was a young child, thanks to the influence of his late, supportive grandmother.

“It was my grandmoms who raised me,” he tells HipHopDX exclusively at New York Comic Con, where he was on hand to sample various video games for Hot 97. “And she was the one who introduced me to gaming — and that kicked off a lifelong passion that carries me through to this day.”

Williams, known to the world at large as HipHopGamer, has managed to turn his “passion” into an actual career. Providing exclusive reviews of various games on nearly every possible video platform, Williams has not only found a home on Hot 97, he’s earned himself sponsorships from industry giant Logitech, a corporate sponsorship from Vitabrace, and strategic partnerships with One37pm and Vayner Media.

Not bad for a man who got his humble start in East New York, Brooklyn — and, he says, he credits Hip Hop for not only setting him apart from the crowd but for helping him change the face of gaming.

“Finding someone that looked like me — a black man from the hood — in video games was near-impossible, and even then, we were often depicted as thugs or the bad guys. Today, with Hip Hop being used for literally everything, it’s helped me change the face of gaming,” he said.

The gaming industry has indeed come a long way from the days of 1997’s Parappa the Rapper (a rapping dog), and rappers like The Game, Logic, and Chief Keef are all self-proclaimed “gaming nerds,” something that most wouldn’t be caught dead admitting even five years ago.

Some OGs, like rapper-turned-actor Ice-T, even share their gaming “tags” on social media and challenge fans to game alongside of them.

Do it For the Navy @glonavygaming

Brought out Yachty in Atlanta just to destroy him in Mario Kart ?

@prettyboyfredo you Betta come on over to the BOX bruh ??? Just won 10 straight in my park #SunsetBeach on the 4's court & the last game was so lit, I had to throw niggas in the rim for the win !!!!! Put a space & lower case "vip" on ya gamer tag & meet me back in the park 2pm pacific time today & it will be steamed on my @twitch channel: enjoycompton …. you can also follow my teams #NBA2K17 pro am page @vipdropoffgang for team & park info & try outs….. hood morning gamers ?? & shout to everybody who was in the park today… #VIPGang #Team2k @ronnie2k @vitriolandsugar

More than just an acceptance of video games in the “culture,” however, is how the video games themselves have evolved to include more authentic Hip Hop elements and experiences. In 2003, Def Jam released the Def Jam: Vendetta game for PlayStation 2, and it featured a super-brawny DMX beating the braids off of Ludacris in a wrestling ring, as Redman’s “Smash Something” played in the background. The game’s follow-up, Fight for New York, was equally head-scratching: Capone-N-Noreaga were tasked with fighting “good old boys” in the South and strange dudes dressed in clown makeup as Scarface’s “In Cold Blood” and Freeway’s “Flipside” served as the soundtrack.

Today’s games have evolved tremendously over the years thanks to the technology boom, but in hindsight, Williams says that the games have evolved so much because there has been more diversity in both gamers and developers (albeit at a rather slow rate). “In the 1980’s and 1990’s, even in the early 2000’s, gaming was geared solely for a certain type of person that didn’t look like me. And there were literally no black developers, let alone female developers, so they didn’t know what we wanted or how to best represent us. But all of that’s changing now,” he said.

It’s not just about including rap in the soundtrack for the game — like Madden 2019 has done with its all-Hip Hop musical lineup — says Williams, who has challenged the likes of Xzibit, Murda Mook, and WWE superstar Sasha Banks to a round or two of video games. Rather, it’s about the optics, as well.

“We need games where characters look more like people that look like me,” he said. “We’ve come a long way, to be sure, but at the same time, we still have a long way to go. But we’ll get there, eventually. And I’ll get to say I witnessed it in my lifetime.”