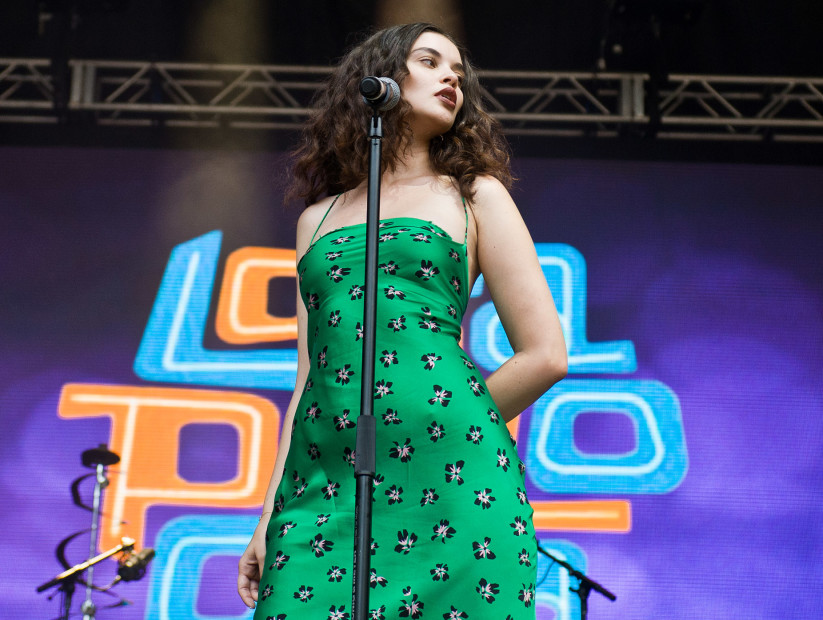 Inside Sabrina Claudio's Road To Redemption

In preparation for the release of her No Rain, No Flowers project, Sabrina Claudio hosted an intimate listening session and conversation in West Hollywood on Monday (July 30). A key topic of the evening was how the R&B singer has developed since the high-profile social media incident that uncovered offensive Tweets — commenting on black women’s bodies and using the n-word — written by a teenaged Claudio on a now defunct account.

Claudio was collected, solemn, and assumed a position sitting in front of the crowd, opening the event with an apology for the situation, saying, “I want to have the opportunity to sit here today and apologize. Absolutely no justification, no excuses. I am embarrassed, humiliated, and shocked. When everything resurfaced, I had a sick feeling in my stomach because I didn’t recognize that person, and I didn’t know how to explain that.”

The ones who are calling her are "reaching" like she didn't tweet bright as day she misses her old account where she shamed black women. That's scary. " bUt SHE sAiD iT 4-7 YrS aGO…pEoPle cHaNge". People do change but instead of apologizing, she deleted her racist tweets.

She reflected on what led her to make the comments when was a teenager, “Naturally, growing up, I was a very miserable person. No reason — I had a great family, my parents are still together, a great relationship with my brother…what was difficult for me, was that I couldn’t figure out what I was doing on this earth, I didn’t know my purpose. Before music, I was trying to get into dancing, into modeling, I was trying to fit in at school. Nothing was working out so I was just really sad all the time. And I think that clearly, I was never thinking, and I would say things that I didn’t mean because I was angry — with my situation and my life. Being able to find my purpose in music, I started finding happiness in myself, in my surroundings. [Since then] my growth was so prominent, that when I saw these Tweets that resurfaced, I was disgusted with myself.” Claudio continued to clarify that while it was true that she tweeted the offensive messages that surfaced, she did not have an account strictly dedicated to degrading black women, as other media outlets had previously reported.

HipHopDX: You mentioned you “had a lot of work to do” in relation to the incident, and people across the internet were calling your apology “weak.” Do you plan on doing more to demonstrate that you are apologetic?

Sabrina Claudio: I don’t want anything to come off as forced. I feel that [hosting] these events is already making a difference, and in terms of my daily life, I’m just going to be a better person, as I always should be, as we all should be. People thought the apology was weak because the first one absolutely was. In that state, I was overwhelmed, and I was weak. This had never happened to me before, and I didn’t know what to say. My second apology was more heartfelt. I have a lot of work to do because I completely started over. Everything was taken away from me, rightfully so.

DX: A lot of people point out that you’ve collaborated with black male artists, but not female artists. Is there a reason for this?

SC: I don’t think it correlates — I collaborated with male artists because I had a relationship with these artists (6lack and Khalid). Prior to collaborating with 6lack, he took me on tour with him and we became really close. With Khalid, we met at festivals and kept in contact.

DX: So, it was more opportunity based?

SC: No, more just relationships and friendships. I’m very to myself — I don’t go to any events and meet new artists, I just happened to have those two in my life and they happened to be male.

DX: Are you looking to work with more female artists?

SC: Yes, in the future. I’ve realized that on my project, I haven’t really had any collaborations. So even as a creative, I’d love to. For now, I’m just getting back on my feet.

DX: How do you feel about the fact that there are men in the spotlight who have made similar comments degrading black women, but they maybe haven’t faced this level of backlash?

SC: I don’t really base my situation on anyone else’s. It’s easy to sit here and wonder “why me?” This is my reality, this is what I got, and I have to accept it. I’m not going to think about the double standard, which there probably is one — I’m not going to compare myself to anybody else, I understand why I got the backlash and there’s nothing to justify.

DX: Are there ever times when you’re thinking, “I’ll never be a global star,” that people won’t ever forget this incident?

SC: I understand that people are never going to forget, I understand that this is something that will follow me for the rest of my career. It’s not even a fear, I’ve accepted it. I don’t ever think about getting to stardom or a certain level — I wasn’t afraid of losing that because that isn’t something I ever thought about. I just put out music, and people happen to listen to it.

The singer held a similar event in New York City just days prior. Her new EP, No Rain, No Flowers is out now. Stream here.