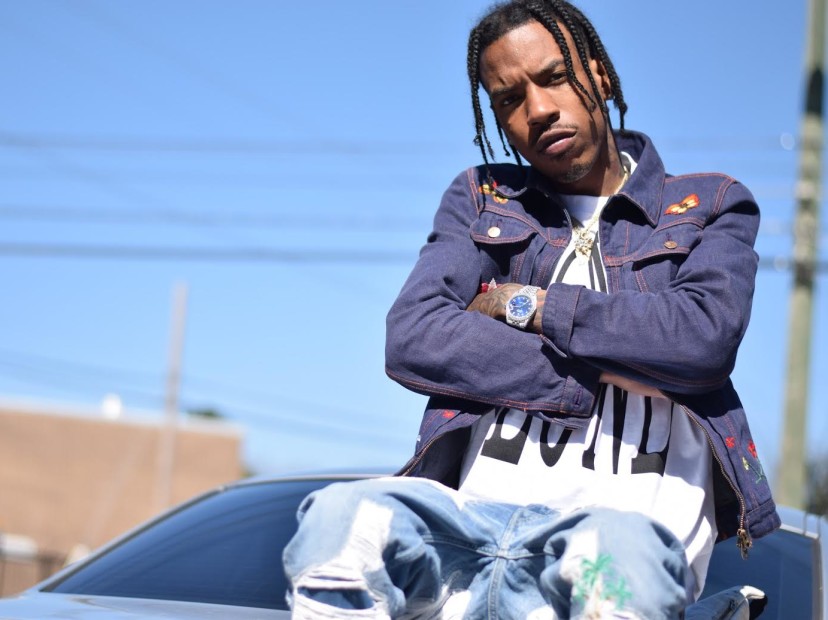 Besides running with his bro Lil Yachty, K$upreme is probably known for his fashion sense first and his musical artistry as part of Yachty’s Sailing Team second. Scour the internet for what high-end luxury brands rappers are wearing and he’ll likely pop up looking fly in the top streetwear brands. The 22-year-old beatmaker has also been featured in a number of popular fashion-centric publications such as Highsnobiety and Hypebeast. Now, he’s pushing away from that image in an effort to make music his sole purpose — but that’s not to say he won’t be wearing the best assemblage of rare threads while doing it.

The shift K$upreme is looking to achieve will begin with the release of Flex Muzik 2, which he views as his best work. It serves as the followup to 2017’s Flex Muzik (which sits at over a million plays on SoundCloud) and should be coming soon.

HipHopDX got the chance to catch up with the California-bred rapper while he was in Los Angeles recently, to discuss the virility of dance-friendly lead-off single “Move,” his music plans, and what exactly happened when he got arrested back in April.

HipHopDX: You went to jail in April while out in Brooklyn. What happened?

K$upreme: My dumbass driver. We had this driver and a Sprinter and his dumb-ass had two straps on him. You know how they be about that in New York. We just had hella weed in the car, pills and some other shit. When they pulled the car over, it was just too much shit in there so they took everybody to jail.

DX: Wow, what did they end up pinging you with?

DX: Good luck with that! So, I know you’ve been working on Flex Muzik 2; is there a release date for it yet?

K$: It’s done. I just got to get my shit mastered now. I’m not in Atlanta, I’m out here but I’m about to go back out there.

DX: Flex Muzik had a lot of big names like Chief Keef, Rich The Kid and Kodie Shane. Who can fans expect to see you on the track with for Flex Muzik 2?

DX: Word. How did the Jim Jones collaboration come about?

K$: My CO knows him on some street shit. He came to the studio in Atlanta and was like ‘Let’s do a song.’ It was lit. We shot a video for it in Harlem.

DX: What about production? What producers do you have working on Flex Muzik 2?

K$: Me, Buddha Bless This Beat, SladeDaMonster, Dolan Beats, and maybe Danny Wolf might have a song on there, if it makes the cut. It’s 15 songs recorded and I have to choose 13.

DX: What else can you tell me about Flex Muzik 2?

K$: It’s fire as hell and I can’t wait to drop that shit. This is my best project because I put my most time into it, the best quality in it and the best type of assistance. I had a team around me. Flex Muzik was recorded in my homie’s closet. This one was actually recorded in a studio. This one was professionally done.

It’s the first time my project will be on Spotify and Apple Music the day I drop it. The last one was just on SoundCloud and everything else hella late. SoundCloud gave me good money for it but I definitely missed out on the other shit.

DX: Let’s talk about this “Move” record. It’s gaining a lot of momentum since I saw [Hip Hop dancer] Meechie post himself dancing to it.

K$: I tried to tap into something different and get out of my own box. It was kind of aimed towards a different crowd. It’s a dance song. I’ve never had dancers send me videos and I never posted dance videos. I’m just growing into an artist and getting used to stepping outside of my bubble and posting shit that I would maybe think as uncool. I’m just getting comfortable with shit and getting in tune with this rapper shit. Not just being a cool nigga, you know what I mean? It was cool. I like how it all played out. The video is on WorldStar right now. I had Meechie send me video.

DX: Did you know he was going to do that?

K$: Yeah, we talked about it. But the rest of the dancers I didn’t know. He’s the only person I asked. My little sister called me like, ‘Monty [Rezell] is dancing to your song.’ And I’m like, who is that? I’m not in tune with that. Those are like young dancers with all these followers but I don’t know who they are. I know Meechie because I been knowing him. He was the first nigga doing that type of shit.

DX: The video for “Move” is crazy dope! You guys were riding dirt bikes!

K$: I didn’t ride a dirt bike, but that was real. They were really doing tricks and shits.

DX: You didn’t get on it? Were you scared?

K$: Yeah, you feel me [laughs]. I ain’t wanna fall. They asked me to ride it but … and then by the time we got to the place for me to get the other dirt bikes it was getting late, so it was like I don’t think we can shoot proper shots so I was happy I didn’t have to do it.

DX: Let’s discuss fashion for a bit because I know that’s something you’re into. Briefly tell me a little bit about your style and the brands you like to rock.

K$: I love VLONE of course. That’s not my favorite, but it is my favorite off the rip. I got that shit tatted on my finger. Balenciaga, Gosha, I like Gucci but that’s watered down now. I like Number Nine, Undercover, Raf, the new Rick [Owens]. All the good shit. I’m really trying to step away from all that streetwear shit because it’s watered down. People got on that wave so late. We been doing that shit since 2011. It’s 2018 and niggas is just now starting to really kick that Supreme shit.

DX: That’s when I first heard your name. It was associated with fashion and then producing and then the music. Is that how it all started?

DX: What do you want people to know about you?

DX: Everyone says that though. What makes you a “real nigga”?

K$: I care about everyone around me. I don’t hate on niggas. I don’t step out of my bubble, I don’t troll, I don’t get caught up in niggas’ hype and I don’t get caught in niggas’ waves. It’s a lot of things. I’m not a fuck nigga. A lot of niggas will say that [about me], too. A lot of people that know me and deal with me will say that K$upreme is a real nigga. He ain’t on no fake shit or fuck shit. None of that.

DX: Do you find that many of your musical peers might lack that?

K$: Definitely. It’s a lot of fuck shit that goes on. You just got to stay away from that and put yourself around people who ain’t on that. You got to keep striving and not let anyone slow you down. You’re going to deal with a lot of that and if you’re the type of person to let that shit get to you, this ain’t for you.

DX: Because of who you are, I can imagine you get a lot of crazy comments in your Instagram. How do you deal with that?

K$: I don’t even pay attention to that shit! It’s funny.

DX: When it first started happening would you get mad about it and start blocking people?

K$: Nah. I reply sometimes too, if I’m bored [laughs]. Fuck, you. You broke. You at your moms house talking about what I’m doing. Sometimes it be like a fake account. I don’t even pay attention to that shit. I like it. All publicity is good publicity.

K$: I just really like music. I like getting in the booth and freestyling and trying to create flows. It’s fun. I like visuals and being in videos. I like the power you can have as a rapper.

DX: Tell me about this power you get as a rapper.

K$: People just gravitate towards you and want to be around that. It’s better than working a 9-5 that you really wouldn’t want to do.