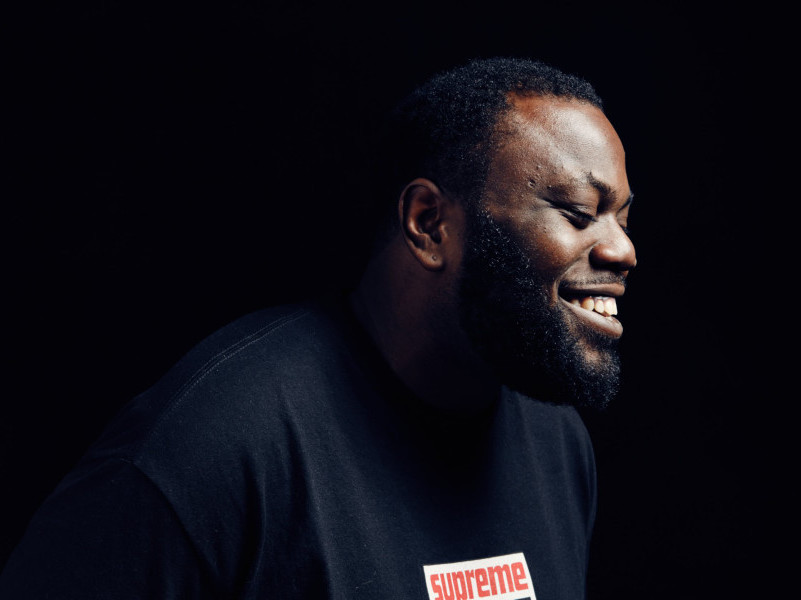 For Chuck Strangers, "Consumers Park" Was The Gateway To His Awakening

Chuck Strangers has full reins of his trajectory right now and he couldn’t have designed a more exciting path for himself.

The 26-year-old released his debut album, Consumers Park, and returned to the Beast Coast for a special 4/20 album release show at NYC’s mainstay SOB’s. And with the right amount of confidence checked by an inclusive rather than “I’m better than thou” attitude, he’s ready to permanently carve out his section of the Hip Hop community’s respect and admiration.

But before his life neatly fell into place, a younger Chuck Strangers: was looking for a loophole at the age of 12 to convince his parents to let him rap. The solution: making beats with an MPC 2000. He set the stage to us in a phone call, “I liked rap and at the time I couldn’t go, ‘Mom and dad, I could rap,’ and say all this crazy shit, so, I was like, ‘Alright, fuck it. I’ll make beats.'”

But once he hit a roadblock of not having access to a 4-track recorder to actually show people his beats, he didn’t return to the MPC until he found out about Fruity Loops, a commonly used software to sequence beats, three years later.

Although Chuck moved solo within Brooklyn, he was steadily expanding his circle by recording with Ak and Dash before they became the Hip Hop duo The Underachievers. Rapping took a backseat to producing once he met up with the early founders of Pro Era.

“People were always cool about listening to my beats but no one was like, ‘Give me all of them right now now,’ until I met Joey and [Capital] Steez.” After he started landing the right beat placements, he decided that it was time to focus on his career and sharpen his skills on the mic once again. But to do so, he felt the need to surround himself with people who owed him nothing but to be brutally honest with his music. Thus began his four-year journey of crafting his debut album Consumers Park in Los Angeles.

Moving from the Beast Coast to the Left Coast, Chuck continued to expand his circle of musical peers by linking with Brooklyn OG in his own right, Brownsville Ka, who has consistently and accurately portrayed the rougher side of life and has a respected co-sign from GZA. It was his stamp of approval that ultimately solidified “Backwood Falls” and “Lorimer Street” ending up on the album. Chuck also has a separate trip-hop project, under the group name Ashley, in the works with singer Syl, who is featured on Consumers Park. And when he wasn’t reading Iceberg Slim’s Pimp or one of his favorite books, George Orwell’s 1984, Chuck was re-training himself to approach music as a songwriter instead of a producer. The end result was Consumers Park — a series of snapshots of his life up to this point, flaws and victories alike, all with a sun-tinged California warmth in the production.

HipHopDX: When you were 16 years old making beats heavy on Fruity Loops, were you advertising it to a lot of people or were you keeping it to yourself?

Chuck Strangers: I was letting the entire world know I had beats. I thought I was gonna be on before senior year. I wasn’t super in your face with it. But I definitely thought I was better than I was. I had a bet with a friend about this girl in high school who’s really good at basketball — like if Allen Iverson had a vagina.

HipHopDX: That’s dope. I hope your friends paid up.

Chuck Strangers: No they didn’t but it’s all good.

HipHopDX: This album has production that isn’t as gritty and is a little brighter than your previous work. Tell me a little about your move to Los Angeles and how that affected your music, especially for this album.

Chuck Strangers: So a lot of people who played instruments on the album are from California. It was always gonna have a little bit of that DNA.

HipHopDX: Who was that guitarist you used?

Chuck Strangers: Yeah! He’s amazing. Jake Bowman. He like saved the album. Because before I started really working with him I don’t know if I was as enthused about it. I felt like I wasn’t doing something impressive. When I do music I want you to listen to it and be like damn I couldn’t have done that. So much music you listen to nowadays, the level of difficulty is not really high. I felt like when he would play on top of things they would give it a spice it needed and the fullness. We recorded a lot of that album in my kitchen and my crib.

One thing I want to say in here is I fucking hate the stigma that they put on people who make New York music. Like, “That sounds like old New York music and you’re being nostalgic.” I’m like, “No, I was born and raised in fucking New York. If you was born in Jamaica and you started doing reggae like Bob Marley I don’t really think that would be you being nostalgic. You’re just doing what’s in your code like I think it’s real disrespectful and dismissive of what we’re doing.

People be calling shit boom-bap that’s not even a drum break. We dropped “Style Wars” and they were all calling it boom bap but there’s no drum break. Those are drums I programmed on the MPC myself. And they only do it to us. When West Coast cats get on the synthesizer and get real reminiscent of Snoop Dogg or Dr. Dre and all that, no one says, “Oh you’re being nostalgic.” Information is mistaken for wisdom.

HipHopDX: Totally get that. I want to move into the artwork for the album since you didn’t want to get into the title and its meaning, per your previous interviews. What did your dad say once you told him you were using his painting of you as a kid for the cover?

Chuck Strangers: Like that Drake line (“40 Mama always say don’t ask permission/Just ask forgiveness”), I didn’t ask him. And sometimes that’s my downfall. You got to be conscious of other people’s feelings and how they might feel about something and I think that that’s something I learned as a man growing up in L.A.

HipHopDX: Working on this album and your approach to making new music must have been a very arduous, self-conscious process. What was that like?

Chuck Strangers: Rapping everyday. That shit is like a muscle. you gotta keep pumping up you know you gotta keep lifting iron. In my music I feel like I’m not greater than you. You know you listen to some people’s music and it’s like I’m clearly the rapper and you listen to my album. But for the most part I’ll be feeling like I’m mad human. That’s how I am in real life. So I was gonna really be myself. I started rapping in my speaking voice instead of like trying to do a flow. I’m still getting better. If people like Consumers Park… I like to compare it to Tribe Called Quest’s first album. If you like this then get ready for that Low End Theory. I can do better than this now I know so much.

HipHopDX: One of the fan favorites seems to be “Class Pictures.” How did the rest of that date end up going?

Chuck Strangers: Oh, really bad. It was the same ex that linked me with Steez ultimately. This was right before music really started kind of working out. I was just a kid and I dropped out of college. I was literally scrounging up change to maybe get $2 for bagel and butter. I still had a girl and when you got a girl you got to pay that pussy bill. So, you gotta go do dumb stupid menial shit that you wouldn’t necessarily want to fucking do. I wanna take them to the movies and to get some food. So, I had to sell these Jordans. So I called my man and really begging him to buy the shoes. He wasn’t interested but I really needed the bread. So, I sold it to him before I even linked up with her and then I get the money. I look over her and she’s just complaining about how I’m always late, not giving a fuck to stop and think about my life.

I named it “Class Pictures” because your class picture is really who you are, whether you like it or not. We could look at your class picture and tell if you was a geek, a cool nigga, the bully. So, now it felt like I was being real honest about stuff.

Fun fact: it almost didn’t make it out. Joey [Bada$$] begged me to put it out. I was worried for it to sound too emotional.

So, I’m pretty sure you’ve gotten Chinese food and not like a sit-down spot. I mean like some grimy truck. The food comes in a styrofoam thing. So, I rip it in half. I remember her vibration like, “This is a bum ass nigga like why do we got to share.”

Chuck Strangers: To be honest, I probably wouldn’t want to battle nobody. I’m not even trying to be better than nobody. We need to come together.

HipHopDX: What do you want your legacy to be?

HipHopDX: I want my legacy to just say that to I was all about love, hard work, and dedication to fire shit like no matter what it was: music, art, or whatever man. Just dedication to truth… and hopefully good at music. If people want to throw that in there too, then that’s cool.

HipHopDX: Interesting how the music is an afterthought here.

Chuck Strangers: Because my thing is a lot of people focus on becoming a good rapper, never to become a good person. In my eyes like that actually matters. You think you’re not going to hell ’cause you’re a fire producer? I know what it’s like to be a bad person it doesn’t feel good. Positive vibes are contagious man. I just think that real men emanate love. If you like my music after that, that’s cool!