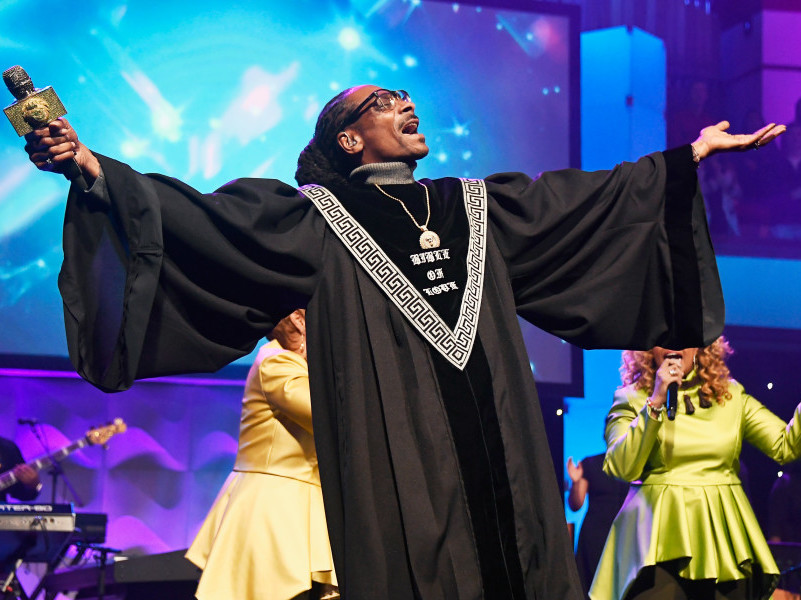 “I’m not going to defend it. That’s what the whole purpose of the record is,” a defiant Snoop Dogg tells HipHopDX when asked about churchgoing “folks” who will call his new album everything but the 8th Deadly Sin.

I sat among a few trusted scribes during a tranquil listening session at The Boss Dogg’s compound in Los Angeles. Originally slated to be one of three volumes due to the immense amount of material recorded, the finished product ended up retaining 32 tracks, essentially becoming a double album in this era where discs are invisible.

The vision paid off as Snoop Dogg’s Bible of Love is currently sitting atop the Gospel Billboard charts. And according to its author, its message couldn’t be any more clear.

“The record is called The Bible of Love; it’s to erase the hate, to end the misunderstanding, the judgment,” Snoop continued in his open testimony.

“You know, ’cause the church is so full of judgment, that’s what runs people away from church because they always prejudge before they get there. Don’t judge me for what I did on Saturday if I show up on Sunday. It ain’t our job to catch judgment, it’s our job to come and try to bring as many souls as we can bring to the table. And us being out in the field, we have access to more souls that need to be saved than the church. So, they should be congratulating us and thanking us for bringing more eyes and ears and more awareness to the church.

“In our church, we represent love. So our church ain’t from no bible, it ain’t from no scripture, it ain’t from no nothing but from the place of love in your heart. So no matter what you are, what you look like, where you come from, what your preference is, we don’t judge all of that. We about the spirit of who you are, that’s what this record is about and that’s how I defend that negative energy with putting it together like that and just speaking the truth because I made this record for my grandmother and my mother and they ‘old school.’ They didn’t come from that judgment and whatever. They can’t judge me and you can’t judge me.”

“Judge not, that ye be not judged. For with what judgment ye judge, ye shall be judged: and with what measure ye mete, it shall be measured to you again.” — Matthew 7:1-2 King James Version (KJV)

Embed from Getty ImagesWith granite Gospel co-signs from the likes of John P. Kee, Kim Burrell, The Clark Sisters, The Rance Allen Group and Ms. Patti Labelle, the music speaks to an older demographic who prefer the traditional hymns from a sanctuary that can emote. One particular song featured on the album gave the 46-year-old rap star that feeling and much more. “The ‘Sunrise’ record was the record that I cried on because that is my testimony,” he said. “That’s me getting a second chance. The record is about me being faithful of having a second chance to live again and to do the right things with my second chance. And that’s my testimony, that I’ve been given a second opportunity and I’m making the most of it. And I’m not being controlled, but I’m in control. “Sometimes you got to understand that we as musicians, we are not in control. So a lot of times when the church asks us to do things, we’re going to go with the money and go with the play. But when you get to the point when money is not the key, you go with your heart and that’s where I’m at right now. And that’s my true testimony — that this is not a money-driven project.” https://www.youtube.com/watch?v=XzHUs2ImJ3s He added, “All the fellas know off the top, Snoop ain’t trynna make a dollar off of this. I’m trying to make sure that everybody get what they’re supposed to get as far as notoriety, as far as making this music. These are Gospel musicians who have been in this world and have been raised in the Gospel world. “And like I said, a lot of us have been outcasts because our background and what we choose to do on the side. If we made R&B music, if we made rap music, and we just came together to put a project together where we all could testify. It ain’t about one testimony, it’s about all of our testimonies together. We’re a family that pray together that’s why we’re going to stay together. We deep.” Of course, no greater validation for the project can rival that of the one given by his mother and renown evangelist, Beverly Tate. “I know there’s going to be a lot of conversation because Snoop’s doing a Gospel record so off the top, like I said, the Gospel world coming after me, but they don’t understand I’m strong with this,” he explained. “My mama’s an Evangelist, so I got extra game when it come to this. I got a culture I can go to with the real game, so they can’t out-talk me with the slick talk and the Bible man, knock it off. It’s about your heart because a lot of preachers sit up there and preach the bible but their heart ain’t right. So what you going to tell me? My church is right here. We do a lot of things that y’all don’t like, but at the same time, we do the right thing all the time. “So what we drink and we smoke and we do what we do, but that ain’t got nothing to do with the message that we’re putting across because we’re very influential. So when people follow us, the thing is that we influence them for the right reasons ’cause I used to be influential for the wrong reasons. I used to teach gang banging and kill-a-nigga 101; that was my specialty. Now it’s save-a-nigga 101. You understand what I’m saying? So the thing should be that he made a full [180] degrees but that’s what’s wrong with black folks, we always find what’s so wrong instead of just shining on ‘em. ‘Well, a nigga still smoke.’ Well, I told you with my words. I’m still one foot in one foot out, but it ain’t you that I’m trying to impress, it’s the man upstairs I’m trying to impress. He read me better than all y’all do. So at the end of the day, let’s try to all get right to get right.” Embed from Getty Images

He continued, “This project is more than just me. I’m just a face and a name and I’m the one that’s going to come with the controversy that’s going to make it be talked about. But once you listen to this project, it ain’t got nothing to do with me, this is God’s work right here.”