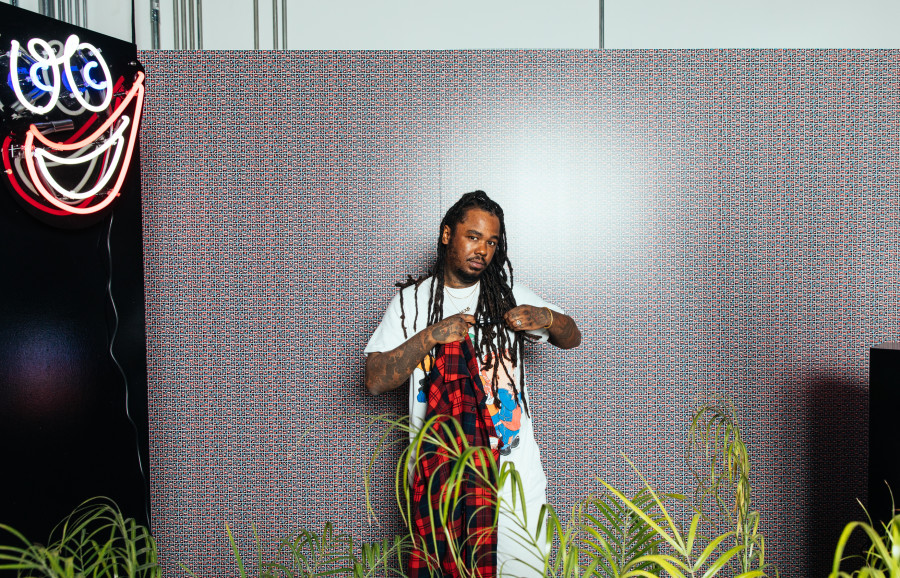 Art and music are interchangeable by default. After all, typically the imagery through an album cover, streaming service interface or music video initiate brain reactions to melodies.

Devin Troy Strother, a bi-coastal visual artist whose work was recently featured on Genius and Dropbox’s Lyrics to Life exhibit, has a unique outlook on his envisions classic musical works to position on his canvases and base models.

For his exclusive installation for Lyrics to Life, Strother delved into some heavy listening of The Weeknd’s 2015 Billboard No. 1 hit, “The Hills” (it’s not like he’s the only one; the video has more than a billion views on YouTube and has been certified 9x platinum).

“The hook made me think about the work I do, and obviously, people come to view it and judge it. It’s open for interpretation and a good challenge, too, to try to work these lyrics into something visual to see. I want to build an environment that’s lush, that gives you the feeling of people watching you inhabit that space. And a space that is watching you watch it. I’m excited to see how people react to it.”

Rob Markman, budding rapper and Genius Head of Artist Relations also echoes the sentiments of the paralleling qualities of both music and art and called the Lyrics to Life platform nothing short of awesome.

“Music is really the soundtrack to all of our lives and to be able to celebrate lyrics and music in that way inside an art museum setting was super special,” Markman explains.

“With so much music coming out these it feels like music is disposable so stop and appreciate artists like The Weeknd, Nicki Minaj, Aminé and Animal Collective is extremely cool to me.”

In addition to Strother’s artwork, Aminé was present to display his piece inspired by his song “Turf,” plexiglass master Marina Fini, brought Radiohead’s iconic 1993 single “Creep” to life and multidisciplinary artist Typoe got larger than life with Biggie’s “Juicy” opening quote: “It was all a dream!”

Check out more flicks from the Lyrics to Life exhibit down below.