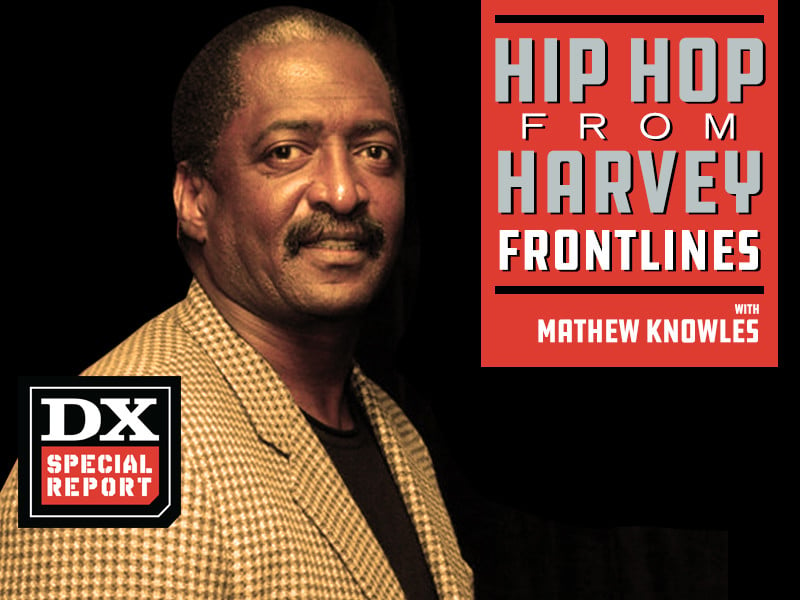 When Beyoncé sent out her pledges and prayers to the city of Houston following the devastation caused by Hurricane Harvey, the gesture was much more than just a celebrity’s charitable cause. The music megastar was born right in the same place where 100 mph hour winds and sweeping tides caused massive destruction that will take the people years to rebuild.

Money can’t buy such benevolence. It generally is instilled into one’s upbringing.

Anyone who has enjoyed Beyoncé’s music over the years knows exactly how instrumental her father, Mathew Knowles, was when it came to helping shape her, Destiny’s Child and her sister Solange’s careers.

As a longtime Houston resident, Mr. Knowles also has extensive knowledge of the city’s history. I caught up with him to document his oral history of the Hurricane Harvey events and how we as a people can take action for years to come.

Were you in Texas the whole time from the onset of the storm?

Yes, I have [been]. I’ve been in Texas the whole time. I moved to Houston in 1976. This is actually my ninth hurricane in 40 years. But none of them compare to this at all.

As a matter of fact, just last week, Beaumont, Texas — which is only an hour and 20 minutes away from Houston — their water supply got totally wiped out this morning, and they just literally are evacuating the entire city of Beaumont, Texas, which is a sizable city in Texas. So it was still traveling pretty fast after I read it got downgraded. Well, it got downgraded. And now it’s getting more speed. I understand it’s headed towards Memphis. But the devastation, still, we’re having some water to crest today, so even here in Houston we’re not out of the woods yet. There’s another five, six, seven feet of water that could be inherited in some of the Houston area because we have so many Bayous, lakes and rivers. So we still have a course to go before peak in Houston.

And then there’s the rebuilding process after, which is going to take us possibly years! Similar to New Orleans. We had so many volunteers yesterday that we gave a significant amount of water to the convention center, to Joel Olsteen’s church and also to TSU. What we have over there at Texas Southern University is about 1500-2000 freshman that literally came to school early to go to orientation. So we have 16, 17, 18-year-olds who’ve left home for the first time (many of them) and are stuck here in this terrible hurricane. Yes, we’ve got water but we’ve found that there’s other necessities they need like toiletries or washing powder to clean their clothes. So I was on a call with Congress Woman Sheila Jackson Lee’s office trying to coordinate to see if they received an 18 wheeler of toiletries as we speak. Embed from Getty Images

That’s pretty unfortunate. I actually read that some of the coroners and police officers have actually found some of the people who were reported missing.

I heard that myself this morning. There’s actually Omni Hotel here that they had to completely evacuate and there’s some people missing. The water hadn’t totally subsided yet. To your point, we’re going to find that to be a case all over the city and county. To put this in perspective and in context, we’re talking about nine trillion gallons of water. They were using a comparison that it would cover all of the 48 states with two inches of water. Or imagine New Orleans with 132 feet of water. Just to give a context of how much nine trillion gallons of water is.

That’s a pretty ghastly thought. I think there’s something in the Bible about that. I know when some of these natural tragedies hit, you’re on ground zero seeing it first hand. Everybody wants to help, everybody pitches money in. But what is the best course of action from what you’ve seen? It seems like you can get a lot of volunteers but it seems like nothing’s done. Like yesterday, I saw on CNN, everybody pledges money but there’s still people trapped in their homes. What’s the best course of action?

“What I’ve personally seen with my own eyes is a city and state become united.”

First and foremost, three weeks ago we were talking about a country very divided. Three weeks later, here in Houston, Texas and in the surrounding counties, we’re talking about one voice, one Houston. I saw so many volunteers from all races and all cultures helping one another genuinely from their hearts. Volunteering time, services, transportation, folks coming with boats helping people who were stranded on top of houses. I’ve witnessed that.

You know it was just interesting because I even had myself a mix up on the delivery of water to Texas Southern. They accidentally delivered it to our convention center. I had to run over there and sort that through. Gentlemen next to a truck … I said, “Hey, I need you guys’ help, I need to get this water over to Texas Southern.” [They] stopped what they’re doing to take pallets of water over there. Then on the way back, they began to tell me some stories, and one of the unique things they had seen and witnessed is that there’s a mosque that’s cooking a lot of the food for the convention center. When they got the address to go and get the food they were like, “This has to be a mistake, this is a mosque.” Well, this goes to show that what’s happening is that everybody is pitching in. Stories like that, that’s for the legacy to live on. After the tragedy has subsided.

That’s pretty incredible. You said you’ve been in Houston since the 70s. My perception of Houston is mostly just the Hip Hop side (and Beyoncé of course). Is Houston typically a divided city? Is it liberal? Is it black? Is it accepting?

We’re all of that! The diversity here is very much. We have a large Hispanic community. We have an equal number black and white population wise. We have a large Asian community. We have the second largest LGBT community in the U.S. We have a large Indian population. Because oil is our number one export and product, we have a lot of folks from Africa. Largest number of Nigerians are in Houston. This city makes up a melting pot of the world. We have always seemed to get along and when there’s been challenges, we always come together. To see how organized it has been, no chaos, very little crime. And I have to say our mayor Sylvester Turner has done such an exceptional job in making quick decisions and the right decisions. He and his team. It’s been a total team effort here. My wife and I literally live in downtown Houston. We’re more fortunate than most, we live in a high rise, but we live one block from the convention center. Where 10,000 displaced people are right now as we speak. And we volunteered four days in a row just to see. I witnessed this myself. Unfortunately, the drama we wanna show on TV and in the media, we want to make it look worse than it really is. So we don’t show the total story of how people are working together, helping one another, in an orderly way.

Being in a high rise, I talked to Bun B and he feels like the city of Houston was built wrong and Harvey exposed all that.

I do agree with Bun B, that this is something that gives an opportunity to engineers and city planners. We might have to come up with another solution as we build because Houston is such a flat city, very little mountains, really flat. Most people don’t realize that we are less than an hour from the Gulf of Mexico and we have a tremendous amount of drainage. A lot of bayous and rivers. There’s some communities that constantly flood and we have to address that in our building codes as how we build homes.

I see a lot of people pledging donations. When we have these natural tragedies. There’s a lot of money that gets funneled through but it slips through the cracks. People who follow Beyoncé, where should they pledge their money to?

When Hurricane Katrina hit, the Knowles family wanted to help. And we wanted to help in a big way. We researched different agencies and different ways to give. Our number one concern is that I just ask whoever gives is to do some research and be certain that your dollars are going where you want them to go. That’s the critical thing. I’m a college professor and the professor comes out of me. It just requires a little bit of research on Google to understand options because there’s options of giving. Again, that’s the reason we picked a sizable amount of money five million dollars in the Knowles-Temenos House because we wanted to build housing and we wanted to see where we put our dollars. So, my suggestion to people is just to research all the different opportunities. There’s GoFundMe, there’s entertainment industry [charity] but research where the dollars are going. Research where the dollars are going. If there’s a certain community where you want it to go, research how to get it to that community. It only takes one second.

Incredible, I agree. From your perspective, you being back and forth from the convention center and everything, where do you see a lot of the money needing to go? Does it need to be towards rebuilding roads, rebuilding houses?

I was just blown away when I had been there three days and never gone back to the dock area. It was just semi trailers after semi trailers of just food and clothing, so they have a lot of that. To me, I see the biggest challenge as, where do people go? Obviously, you can’t stay in a convention center. Eventually, that’s going to come to an end. How do we put folks back into the community, back into homes, how do we rebuild, where do dollars come from? That’s not going to happen immediately. What do we do in that interim? What do we do in that transition that folks are gonna have to go through. That’s what we’re gonna have to figure out. That’s the biggest need to me. That’s the transition of getting you out of the convention center or any other temporary housing, back into your neighborhoods. You can’t build a house over night. You can’t pay for a house over night.

Unless you’re on one of those HGTV shows. And even then I think camera tricks get involved as well.

So, it’s gonna require some significant FEMA help. But again, we’re not going to be able to put these — I think 250,000 people came from Katrina to Houston and ended up staying here. I wouldn’t be surprised if now just the reverse happens.

Back to New Orleans?

It goes back to New Orleans.

I know San Antonio is down there. Do people ever locate there?

Yeah. I think it’s obvious. Those cities like Austin, San Antonio, New Orleans … some people will have to locate over there. Again, you can’t build a house over night. One thing that’s going to be helpful to us is that we have an explosion of apartments being built, and we have an explosion of high rise buildings being built. As we look at the transition in the future, this is really going to bring awareness to high rise living. Especially in a town like Houston.