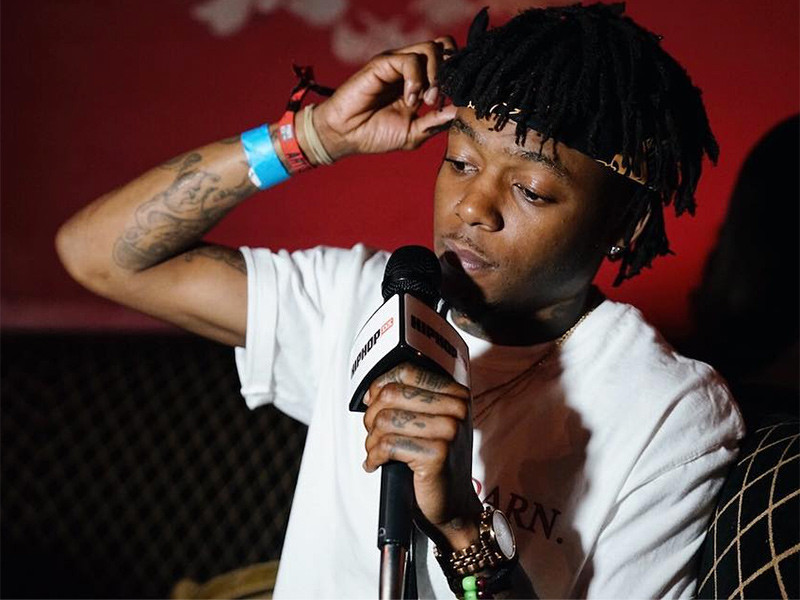 Signing to J. Cole’s label back in February, J.I.D quickly proved his lyrical ability to the world on his debut project The Never Story. While this was his first release as a solo artist, the East Atlanta rapper is also part of Atlanta-based collective Spillage Village, which consists of himself, Hip Hop duo Earthgang, Jordxn Bryant, and Hollywood JB.

Catching up with J.I.D backstage before his set, it was clear that this is only the beginning for the 26-year-old.

HipHopDX: How difficult is it to stand out as a lyricist in Atlanta?

J.I.D: It’s not really up to me to try to stand out. It’s for the people to decide I’m the person that stands out to them. I like all the music being put out of my city and really liking all music. I’m a fan of everything first so that helps me do what I want do. So that’s not really up to me to decide that. I’m trying to put out my story the best way and just be like me. I’m a cool guy. I’m just chilling. I’m a cool guy. I’m not even forceful.

DX: How does it feel to be compared to Kendrick Lamar?

J.I.D: [points to a DAMN.-inspired DARN. shirt] You see this shirt? This shirt is hilarious, right? [laughs]. He’s one of the greatest. People are saying — even if it’s the sound or texture of our voices or whatever, it’s cool either way. Because he’s one of the greats. I love that! So it’s good. I’m cool with that.

DX: Stemming off J. Cole’s “Neighbors” joint — you guys actually had to rap a verse to get inside the house? Were there other artists from Dreamville who had a similar experience?

J.I.D: It was really a practice technique more than anything. It wasn’t like — you have to. It was more of us just trying to get better and see what we can do, on the spot. And that’s what it was. It was the team there, and people. It was just artists, ’cause he deals with, not a good amount, not everybody, just a good group. And everybody just practice all the time. So we do practice techniques to get better and stuff like that.

DX: Did you have deals lined up with other labels?

J.I.D: There were offers on the table… but we gotta date a little bit. I gotta meet people. Cause it’s a relationship that’s gonna be lucrative on one hand or the other, and I just wanna make sure I’m good with the person. Yeah, I had stuff on the table. I did me. I found the best situation for me.

DX: You still got that Pontiac G6?

DX: Did you trust J. Cole driving it?

DX: Do you think you can out-rap J. Cole?

DX: What’s the best advice you got from Cole?

J.I.D: I don’t know. We talk about a lot. There’s so much stuff running through my head right now. So, I don’t know. I don’t even want to give up all my gems.

DX: When did you get your first million?

J.I.D: I got a million? The record never did a mil? It actually got five. [laughs] Nah, I’m playing with you. It’s cool. I look at the numbers and stuff like that, but it’s not really like the main focus. I just put the work out there and try and move on. Like as a man — that’s what a man does. You do your work and then you move on.  I don’t really dwell, you feel me? I’m trying to make better stuff. I’m trying to do like $50 million next. Just progression.

J.I.D: We touring right now. The 4 Your Eyez Only Tour with J. Cole, Ari Lennox, Anderson .Paak, and Bas. So that’s going to be a good experience. And I’m making music and I’m finna drop a song soon. I’m still producing. Still creating.

DX:  I saw you post with Ty Dolla $ign. What are you guys working on?

DX: Who do you want to work with?

J.I.D: I’m such a fan of some artists that I feel like I’m not there to work with them. Like I’m not in a position to. So it’s hard for me to say. But I’m a huge fan of Little Dragon, Arctic Monkeys, Childish Gambino, [Lil] Uzi [Vert], Playboi Carti, [Lil] Yachty, those guys. I’m a huge fan of the music. Just like what people bring to the table. I just threw out artists I love right now. Oh, I love… I want to work with Jessie Reyez. She’s amazing.

DX: How’s fame treating you? Are you being recognized out?

J.I.D: Yeah that’s different for me. I’m a people person, but it’s different. It’s not bad, though. I like it. It’s cool. I like being noticed for something positive.

DX: What’s your obsession with turtles?

J.I.D: That’s one of my favorite animals. I’m a real animal freak. I just like what they stand for. That’s Earthgang.

DX: You got any turtle tattoos?

DX: Was this your first time in LA for BET weekend? What’s the first thing that you’re noticing outside of traveling for tour?

J.I.D: I’ve been touring for the past two years. But people knowing the words to the songs … that’s kinda ridiculous. Because I try to do crazy stuff on my music. So to see people out there, doing the same. It fucks me up. Watching the people say the words, or at least attempt. While they enjoy themselves, that’s what it’s all about.

DX: What’s the thing that keeps you humble while you’re evolving in the industry and meeting the top heads?

J.I.D: Just staying around people who still call me my real name, or what I was known for before I even starting rapping or anything like that. Just being around real people, like my mom. Just real life keeps me humble. Just knowing myself. Being able to look in the mirror and be cool with myself.