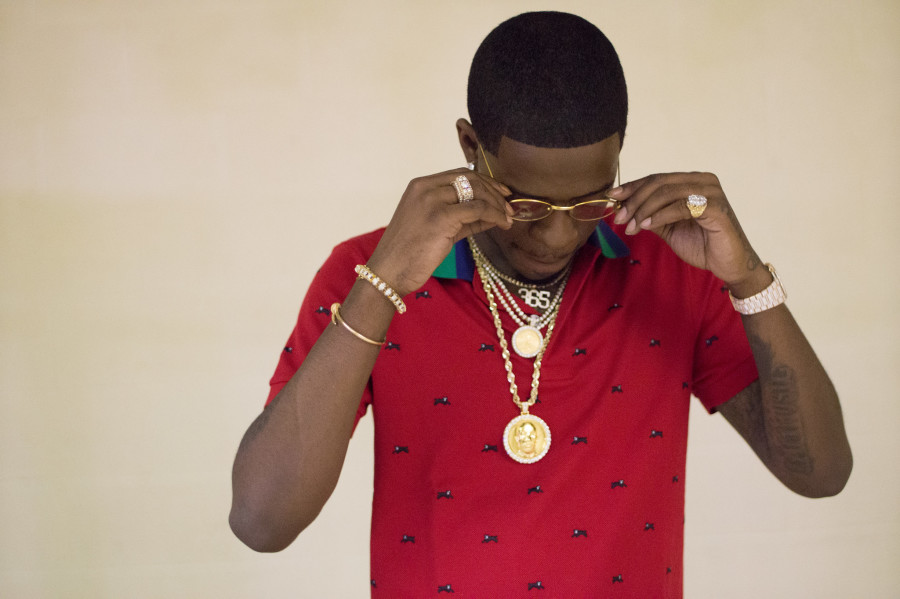 Rich Homie Quan, born Dequantes Lamar, could’ve fallen much harder. It’s nothing he doesn’t know. He could’ve been flat on his face after the lengthy litigation with his former label TIG Records or after publicly disbanding from Rich Gang in 2014. His last big record was “Flex (Ooh, Ooh)” in early 2015. It’s been quiet for him since. Almost.

Last year, the 27-year-old rap star got on stage at the VH1 Hip Hop Honors event and — well, to call his Biggie tribute a mere flub, would be a minimization of epic proportions. It was especially hurtful because the Atlanta-bred artist was given the platform to stabilize the ongoing push and pull, the debates rooted in thinly veiled malice, comparing the significance of today’s rappers to that of MCs of yore. Quan was given this platform and he blew it, unequivocally. So with all things considered, he’s well aware that things could’ve gone the other way. His career could’ve stalled out but for a few bleeps on the regional radar.

The only thing to do was return to square one. His fans were still there waiting. He was finally awarded a hefty $2 million settlement with TIG last fall, and it was time to get back to work; signing with Motown back in February and dropping Back to Basics the following April. The project is still picking up momentum and serves as a sort of precursor to his long-awaited debut LP Rich In Spirit, slated to drop this summer. After all that time and a couple of awkward stumbles (a looming weed charge notwithstanding), Quan had found a way to get back up.

HipHopDX had a chance to speak with the ‘Basics’ creator about liberation, love for TIG and the pitfalls of money that come too quickly.

HipHopDX: Were you excited to get ‘Back To Basics’ off after all this time of being quiet?

Rich Homie Quan: Yes! I treat my songs like my kids, that’s how much I cherish my music. And not even just Back to Basics… Just being able to get back to doing music again and being positive.

DX: Would you say it was the lawsuit that had your hands tied for so long?

Rich Homie Quan: It definitely was. It was the litigation and it was so long, legally they were saying that I couldn’t put out music but they aren’t thinking about whether or not I want to put out music. And if you wanna put out music, you gotta be cautious — you gave your all the first time with music. So [the situation] just makes you better within.

Rich Homie Quan: It is. When you giving your all and you ain’t been paid for it. It’s like, ‘Damn. What I’m giving my all for? And should I even give my all again?‘

DX: So at a point, thinking about that first situation, did you just want to leave rap alone?

Rich Homie Quan: I wouldn’t even say that. But it scarred me. At first, I ain’t wanna fool with it. And I knew if I wanted to do it, I’d wanna give it my all. Ain’t no point in doing it if you don’t, but I was half-assing it. And you could tell. You feel me? [The music] was just different. So yeah, my first situation scarred me, but if I had the chance to do it all over again I would, and that’s the crazy part about it.

You gotta think about it like this: if it wasn’t for TIG, I wouldn’t be here today. I know the situation wouldn’t be what it is that’s why I still love TIG. They still put me in a nice situation, I just feel that the situation should’ve been better. I still just major love for Fly, I just feel like things could’ve been done differently. Like I said, I wouldn’t do anything differently but I wanna… I wanna be bossed up man. Like, I was eating, but I wasn’t grubbin’. There’s a big difference.

DX: You cut your hair recently too. All a part of this return to “the basics?”

Rich Homie Quan: At that part of the process where I cut my hair, that was me really getting back to the basics. I wanted to showcase it in my lifestyle, like, to get back to the basics, I knew I just wanted to completely change myself. Back to where I was when I [started]. So I cut it all off. I wanted to become a whole new Quan and have a mindset of being a new artist. That’s what “back to the basics” means to me.

Yeah, I’ve made mistakes that I’m not proud of but at the same time it comes with it. You know, they’re like growing pains… But I’m just happy and content with myself. So I wanted to cut all my hair off and get rid of all those bad vibes. I wanted to start back with radio programmers. I ain’t did that in like four or five years. Going back and shaking everybody’s hands, shaking the hands of the [program directors] and the DJs. The grind part of the work! I guess social media has taken away the grind part that this job requires. I really wanted to get back to the stuff that matters. Touching the people.

DX: What happened in the first place though? What made you lose your way?

Rich Homie Quan: I would definitely say the money. Around the time I started, I made money fast. I was living with my mama then and I can still remember living with her in the back of my mind…

“But just getting comfortable. Everybody gravitated towards my music so fast. And it was like, ‘Well damn. I could just say anything and they’re gonna gravitate like that.’ And just with me, I stopped taking it serious.”

I really started feeling like the game needed me as opposed to me needing the game. I really had to recenter myself. I started hearing the music change and before it went on a downward spiral, I wanted to stop it.

DX: You have a line on ‘Basics’ that says: “Since I cut my hair, I feel like everybody Quan…” Can you explain that?

Rich Homie Quan: Man, I just feel like with the new Hip Hop…I know for a fact ain’t too many of them cats that can’t say Rich Homie didn’t have a hand in them rapping. Just being real. I don’t even feel like there are too many real ones like straight up from my breed. I’m just taking credit because I know that I’m a lot of those dudes favorite rapper. They ain’t gon’ say it but c’mon… Straight up.

DX:You start the project off saying: “I’m so content with the person I am, I could give a fuck what you think about me…”

Rich Homie Quan: And I don’t think it’s no realer than that, like, when you find out what self want? Can’t nobody tell you differently about self that you don’t know… I’m content. Can’t nobody judge me. And even if they did, I’m beyond that. I’m looking beyond that because I don’t care.

DX: You sound liberated like a newcomer to this thing. But you know how newcomers are like that really because they don’t know what’s coming…

Rich Homie Quan: Right! It’s only because now I don’t have no feelings in this shit. When I was starting, I had my feelings on my sleeve, man. Remember, I said my songs are like my babies, I don’t like anyone more than the others, they all precious to me. I was just in my feelings and not knowing the business at first I just wanted to sign the papers and because I wanted a way out. That was all. But I definitely got that — a way out. I ain’t know I would be this successful but on the way to success, I’m just recouping, trying to make sure I’m learning the business. The time I been off gave me time to cross my ‘t’s, dot my ‘i’s and learn the business, learn what s–t means and that’s what I did.

Stream Rich Homie Quan’s Back To The Basics Right Here

DX: You had a lot of success that came really fast though. You’ve made a lot of money in only a few years, travelled, so on… What’s left to look forward to?

Rich Homie Quan: I wanna continue having fun doing what I’m doing and I think at one point you could hear it [in the music]. Like, it wasn’t fun no more. And right now, it’s back to being fun again. I’m back to being happy, it’s not a job. When I started looking it as a job, I started getting comfortable. I wasn’t having fun with it. I also wanna get me a Grammy. I think that’s what we all want — a Grammy.

DX: There’s been a solid reception of Back to Basics too. Seems like people were just waiting on you.

Rich Homie Quan: I’m definitely more than happy because you don’t get second chances in music, if anyone takes off a job for over a year, you can’t come back in. You can’t come back and get your same job, same title… It’s over with! So for people to still gravitate towards what I’m doing, allows me to still be on this road. That’s it. I’m just taking things one day at a time and trying not to take anything for granted.