Michael Christmas Just May Be A Genius 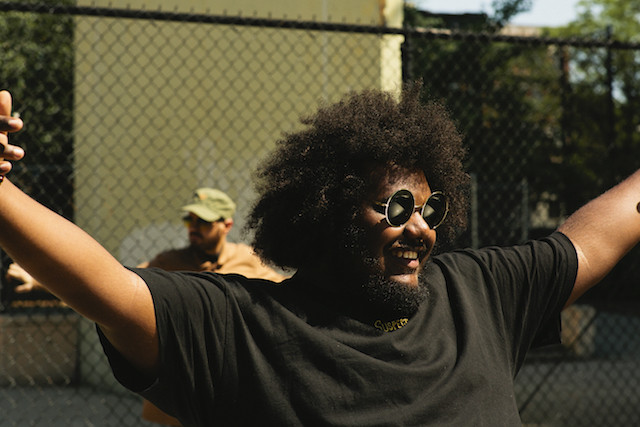 Soundcloud rapper. Internet rapper. Regular rapper. However you want to spin it, Michael Christmas is fine with it. It fact, he’s fine with every aspect of his life. Whether he’s back home in Boston rummaging through Netflix, binging on video games or out in L.A. recording next-gen trippy shit, the Black St. Nick is living a carefree life just like any 22-year-old from around the wave.

Save for the fact he has a musical talent. A talent that gives him steady burn where ever MP3’s are streamed. Speaking of burned, that’s the sensation that accompanies his latest project, Lady Parts, a full-blown collaboration with globally known producer Scott Herren a.k.a. Prefuse 73. When Christmas’ right-hand man Goodwin told him it would be a good look for him to tackle such a project, he didn’t look back and the end result is a lyrical depth amalgam of electric and synthesized harmony. Together they are known as Fudge.

With the project releasing today, HipHopDX caught up with MC the MC and discovered how Fudge became a reality, how underage drinking played a big part in its creation and the possibility of him getting a show on Adult Swim. If he makes it happen for himself.

All in one interview!

HipHopDX: Personally, I’m from the walk of life where I think EDM and Hip Hop should be segregated.

HipHopDX: They’re both strong in their own right and have their identities. But when I heard Fudge, I thought, “If you’re going to to do it, this is how it should sound.

Michael Christmas: Yeah, exactly! I knew he had be around for a while and he had a real eclectic vibe to himself. He’s been around for a long time so when you put it that way, like they told me he knew DOOM and shit. That was one of those things where I was like ‘hell yeah!’

HipHopDX: Do you feel doing something completely off-kilter like this, do you think that’s the only way artists can’t get noticed these days?

Michael Christmas: Not necessarily. I think that’s not even a real commodity honestly. I did it because it was something different to do. I don’t know if that’s what works at this point for everybody. I just thought it was something cool like you know I’m about to work with a legend type shit. I never heard of him before the shit.

HipHopDX: How long did it take you to record it?

Michael Christmas: Honestly, not that long. We did about 7-8 sessions in Brooklyn at Nick Hook’s studio and I was drunk half of the time. Having Nick Hook there was fire for a lot of reasons. For one, I didn’t know about Nick Hook either until we fucking did the album and I was like ‘holy shit this dude’s actually crazy.’ Like he’s actually a crazy person. But like the cool kind of crazy person. A lot of the shit they were playing, I was like … “How am I supposed to rap on this?”

HipHopDX: How did you rap over this? Did you have to punch a lot?

Michael Christmas: There wasn’t a lot of punching, there wasn’t a lot of anything. I tell people all the time like honestly, this shit is not that hard. You got to go, just do it. You can’t be scared and that’s the thing with a lot of artists is that they kind of stick with their thing because that’s all they know. I like to experiment and prove artistry. If you just sit there and do that one thing, people are going to get tired of that shit and eventually, you’re going to get tired of it as well. You’re going to get bored and depressed.

I was listening to some of those beats laughing my ass off like, “I. Don’t. Know. How. To. Approach. This,” and that, in turn, created some of my craziest flows. My man Goodwin told this is the type of music where you just “bar out,” and that’s what I did.

I did a whole song about a car crash. I was in a crazy ass car accident last year with my boy OG and shit. It was talking about the different things flashing through my head and my future in those couple moments and then the shit was over and I was fine. Shit was weird, the whole process was super weird. I had a good time drinking beer every day and I don’t even think I was 21. I was just in the little deli on some sneak shit. But I look old in the face. [Laughs]

HipHopDX: If this project goes on to be one of those “career-defining” bodies of work, that would be awesome to have that.

Michael Christmas: And even if it doesn’t, where people don’t get it, the people who do get, it’s gonna be something special for them to have. I think the age where people have a lot of secret music or by the end of their career, they have a lot of music that no one’s heard and is great, that’s on some DOOM shit.

HipHopDX: You’re just out here throwing out music, not necessarily concerned if something of yours blows up.

Michael Christmas: I don’t need a bunch of people to define me. I don’t need a bunch of people sitting in a room, telling me ‘we need to make you look like this.’ I’m me, everywhere I go. People see me on the streets and be like ‘this the same exact nigga that be rapping, doing the shows, in the music video.’ My character is my life which is the best thing about that decision that was made. I just want to be me. I think I’m good enough and I wouldn’t even say cool enough, just good enough for my own.

HipHopDX: So you don’t have any problems with those tags? Everybody has tags and labels, like we have the Mumble Rapper or the Weed Rapper and I guess you would be the Everyday Rapper?

Michael Christmas: I really like that shit only because I got finished chugging milk and eating cookies right just now. Watched a movie this morning. Like I’m actually on some regular shit.

Michael Christmas: I was kind of offended when I first started about that but that’s because I was like young. But I really just rap about what I did a few days ago type shit.

HipHopDX: What is the best movie you’ve seen this year?

Michael Christmas: Hmmm … that’s a good question because I go to the movies a lot. I want to say Captain America: Civil War but I’m not sure that’s it. It was a good ass movie, especially compared to Suicide Squad. With Captain America, I tried to watch that shit again illegally, immediately after I left the theaters. And The Life of Pets was an unexpected good one I saw in the theaters. The biggest disappointment to me was Finding Dory — I didn’t like it at. But what’s interesting with both of those movies is when I saw them in theaters, I barely saw any kids. I got to the movies on the weekdays. On the weekends, that’s when everybody be like having dates.

Michael Christmas: Absolutely not. I’ve been getting curved since day one. I don’t have no necklaces. These girls don’t care about rappers. They care about money.

But speaking of those cartoon movies, I had like a whole epiphany about like voice acting and how I want to do that really bad. I’ve always wanted to do something in TV and film and I’m gonna do it like no matter what.

Michael Christmas: I don’t want to say too much because once I tweeted that, I started writing. I seen how people getting at Adult Swim and if they come at me I gotta have something ready. My manager said that we can sit with them if we really wanted to but we have to have something tangible to show them. I immediately started developing characters and shit like that and me and my friends are gonna work on it and then see if we can make something happen. I know people can write like 100 pilots before one of them gets picked up and shit. So I’m not that worried being that I’m only 22-years-old I think I have plenty of time to learn how to do it.

HipHopDX: After this album, are you going on tour or release another follow-up?

Michael Christmas: I think I’m gonna have something. I don’t wanna talk about it but I know exactly what I’m trying to do next year. I’m excited.

Check the tour flyer down below to catch them at a city near you.