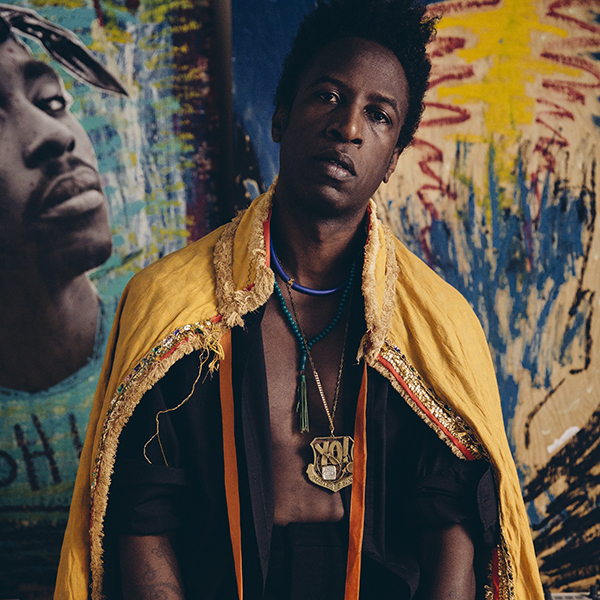 Saul Williams Is Here To Blow Up Your Illusions On "MartyrLoserKing"

Classic Jay Z always ends with some kind of declarative. Like after devastating some fuck boy when they ask what’s the difference between a 4.0 and a 4.6 with, “Yo, them shits even got leathers?” Or on his classic “Money Cash Hoes,” when he goes for something a little more sincere. Something about America. “Okay, okay, okay,” you hear. “So now the guy’s working for Jay Z..” And the Goodfellas skit bubbles up to the front of your mind. You know what happens next, right? The line, maybe, of our century: “Fuck you, pay me” said in a drawl so sinister you could smell the sewage wafting off the docks. Well, Saul Williams, the revolutionary poet and cat from Newburgh, New York is doing anything but that. He’s in it for more than cash. He’s in it for the soul.

Now, a lot of people say that and almost no one means it. Saul Williams does. He means it as much as he knows we are all MartyrLoserKings. You see it’s not just the name of his new work. It’s the lifeblood of his movement toward more. More humanity; more love; more music; more trying. It’s how he feels about art. He’s here to fuck shit up, and he knows it, “MartyrLoserKing is just my way of saying I’m going to spend the next two years being a beef rapper,” he says. “On my 50 shit.” He chuckles at the thought and so do I. This is the guy whose NYU thesis became Slam, and ushered in the seminal street poetry movement of the 1990s. The guy whose albums are like sound clashes played out over Stanley Kubrick films. Wild dialectical tradewinds muscle up to create downward drafts of thought. Like, well, here:

It’s less a manifesto and more like a way of being. He said he conceptualized the album because he “wanted to find a platform to be able to talk about all the shit that I had been experiencing and reading about on the world stage.” We’re talking everything from the sprawling surveillance state to the savagery of a police state no longer here to “protect and serve.” To the immediacy of LGBT rights, and fast food Hip Hop. He connects these ideas effortlessly as he flits between narratives recalling the deaths of Michael Brown, Scott Walker and Eric Garner with the ostracizing of Chelsea Manning and Edward Snowden. But how to do it? Who are we fighting? Saul’s got a few ideas: “There’s the one percent that we know of in terms of Wall Street and bankers. And that’s not a new fight. Then I think of those people that gave their lives and voices to uplift and connect the dots in terms of uplifting humanity. People like Aaron Schwartz.” There’s more, though, “Those bureaucracies are composed of people like you and me who basically just have to check themselves. I think it’s Allen Ginsberg that has a poem where he says policemen are just regular people in disguise.” Really, it comes down to the fact that we’re fighting ourselves.

It means stamping out “respectability politics.” Grounding the idea of the “model other” and grinding it into dust underneath your fingertips. And it begins with us. Our generation. But even Saul had to distance himself from the fray in order to see it clearly. And like most Americans who wish to find their Americanness he moved to Paris.

From Paris With Drones

“Ferguson is not an island in America,” Saul belts out. Of course, it isn’t. Ferguson is America. It’s the dream of the melting pot deferred. Where fear, segregation and power won out over the common sense directives of governance. It’s where a CVS matters more than a human life. Which is everywhere. “You turn on the radio and a big gap between the discussions that we’re having online and in reality about what’s happening in the world emerges. And it’s bullshit to think that we can address those things and still turn-up.” He’s right, right? How can we feel so strongly about something and so soon dash it to the wayside? As Williams would say “protest music makes you dance, makes you hit that backflip that maybe you couldn’t hit before because of how the music touches you.” But there’s something else, as well. The struggle for humanity has brought “unapologetically black” art back to the forefront. Saul Williams agrees, “You have this new shift because of this technology that allows us to communicate on a global scale and you have the Arab Spring. And you have tech that allows us to film police when they’re up to bullshit. For kids in Ferguson to connect with what’s happening there to what’s happening in Palestine.”

And, as usual, Williams’ wants more. He’s not just worried about the Kendrick Lamar’s and D’Angelo’s of the world making the kind of music that resonates within that paradigm. He’s waiting on folks like Tyga, too: “What does Tyga say about this shit?” That’s where I lose it and laugh out loud. We sometimes forget that rap is a genre and people are not. That Tyga may feel the same way, too. And Hip Hop isn’t this thing where you can so easily separate the humanities of those who just want to dance versus those who want something else. So he explains it, “There are many MartyrLoserKings. It’s a title we all share. You don’t have to die to be a martyr. We know that. But I think about it in many ways including the Thom Yorke, “I’m a loser” way. I may not have the cars. I may not have a lot of money. But I have something that’s worth more than that. Something that’s worth checking out.”

“The only question for me is, ‘Who would Tupac punch first in the face?” Would it be Kanye? Who made “Nigga’s In Paris” when Saul was actually in Paris. “But not in the Louis Vuitton showrooms,” Saul says. His time was better off spent in the streets and cafes, studios, undergrounds and lofts of folks pining after the beats of the Bomb Squad. “You ask me about Public Enemy and the Bomb Squad were using the sounds of the streets in their beats. So you ask me about a drum machine and musicality, and I say it’s 2015. People have drone machines, now.”

There are all kinds of artists in Hip Hop at the moment. There are the stylists like Chance the Rapper, and the poets, and the young lyricists like Earl Sweatshirt, but when asked what the older generation has done to help, Saul scoffs, “Mixtape T.I. back in the day… I listened to that cat like he was T.D Jakes. He was aspirational. But I think [meaning Earl and Chance] may have been let down by their elders. The Jay Z’s and the Puffy’s and all that are the African-American equivalents of Donald Trumps. You know, motherfuckers that are actually bankrupt talking about money. Morally bankrupt talking about money.”

That’s Saul Williams on this album. He’s exposing through sound the incongruency of things. You talk about activism and Saul has a simple definition, “All an activist is to me is a human who’s paying attention.” Go tell that on a mountain.