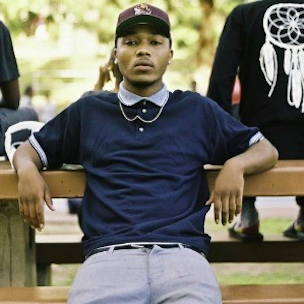 As long as Hip-Hop has had a presence on the West Coast, South Central has been a hub for talent, dating back to Ice-T and Ice Cube’s run with NWA. As much as some things have changed, others have remained the same. While ScHoolboy Q has played a major role in bringing the TDE brand to the masses, Nipsey Hu$$le has been representing his own brand independently on and off the mic. With the help of a Carolina emcee, a new name may be added to the long list of South Central alumni.

While the 21-year-old Cozz told DX he started taking rap seriously only about a year ago, his buzz, created mainly by his debut album/mixtape, Cozz and Effect is that of someone committed to the art of emceeing for a much longer period. While his West Coast upbringing makes him unique and a great addition to J. Cole’s DreamVille roster, his unique energy and wordplay makes him a great addition to an LA scene that’s become extremely diverse.

Cozz took time out to talk to HIpHopDX about his life after the release of Cozz and Effect, DreamVille, and his upbringing in South Central, Los Angeles.

Cozz Explains His Beginnings As A Rapper

DX: What inspired you to start rapping?

Cozz: That’d be the homie. I met a dude named Chris Martin.17 years old; he went to my high school. He told me he rapped. But you know, you meet a dude, he tells you he raps, you kind of blow it off. He was really good so he inspired me to do it. With me it’s always, if you can do it, I can do it even better. So when I first started, it was just trying to beat him. I always had a love for music growing up too, but as far as actually trying to rap, respect to Chris Martin, the homeboy.

DX: Whom did you grow up listening to?

DX: You mentioned that you’ve been seriously rapping only a year. When did you know it was real?

Cozz: Last year. I’d always go to the studio in high school.  At 16, I’d ditch class and record but even then I didn’t take it serious. I’d say I started taking it seriously last year. I literally had a job and would pay for my own studio time last summer. I went to community college and I would ditch class to rap. I found my skills developing; I was starting to feel myself. When I linked up with the homies Tone and Meez, we just started making music, and Meez being a producer, I would be at his house making music and shit. When I first recorded my first couple tracks, “Dreams” was one of the first songs I ever recorded. When I heard that, I was like I know this shit is real.

Cozz Describes The Buzz Around His Cozz and Effect Debut

DX: How do you feel about the response you’ve been getting with Cozz and Effect?

Cozz: It’s amazing. It’s the first time I did music and put it out In to the world. To get the response that it did, it’s just a blessing. I’m getting new fans every day, every fan that I get, I’m grateful for. It’s a beautiful feeling. Its dope, everybody has been showing love, no bad responses.

DX: Do you feel like listeners got your message you were trying to get across on that album?

Cozz: Yea. Definitely. Just from seeing comments and shit on Twitter I get, people talking about it, I feel like they did get it. It’s a much bigger picture than Cozz and Effect of course, but I feel like Cozz and Effect is a piece of the puzzle. This was my intro. I definitely feel like people felt where I was coming from.

DX: You represent South Central/Inglewood. Do you feel like people have finally gotten past this “You have to fit a certain image” to represent Los Angeles?

Cozz: Hell yea. Definitely! You can just tell by the people you named in the music. It’s all different. Nowadays, you can just be yourself and not give a fuck. You got dudes like Tyler the Creator from L.A. His swag is out of this fucking world. He got his own shit. He’s dope though. You got Dom on some L.A. player shit, always smooth, chill shit. You got Nip on that gangster rap shit because he lived that life. I definitely feel like L.A. is doing its own thing. Even with my shit, if you heard my music, you couldn’t really tell where I was from.

DX: You said in the album you went to Mira Costa High School?

Cozz: South Central… Manhattan Beach is the exact opposite of South Central. It’s predominately white. It’s by the beach. Ain’t no gangs or nothing like that.  It’s peaceful, quiet. The story with that, I grew up in South Central L.A. but my mom wanted to put me in that high school to get away from that gang shit or whatever. So that really changed my whole mindset on life. Being down there doing that for four years. What I was talking about on “I Need That.” “Hit the beach in the day / I’ll be back at 65th at night” I was still living in South Central L.A., but going to Mira Costa High School every day, coming back to the crib at night until the 11th grade. My mom moved out and she moved closer to the school in Redondo Beach. I was living with her close to two years. Mira Costa was like life changing shit. It took me out that South Central box. I’m glad I went there.  It gave me new experiences but I still got my old experiences from South Central. I got two sides to my world, I got way more shit to talk about. It broadens my horizons.

DX: Recently, there’s been a lot of stuff going on and Charles Barkley came out and said “When you’re successful and black, brainwashed unintelligent black people hate on you, and they question your blackness.”  Did people question you because you went to Mira Costa?

Cozz: They don’t question me. The reason why I said that is because the homies be like “Awe…this nigga!” Because I would talk a certain way or I would talk more proper or I would do shit like go to the beach or party down by the beach, they’d be like “Aww, you getting white…” blazay blah, but I totally agree with what he said. It’s the truth. I seen it. It hasn’t happened to me but I definitely seen it with other black kids at Mira Costa. It’s like a brainwashed type of thing.

Cozz Explains His Competition With J.Cole & Hopes For Dreamville

DX: How is the chemistry been with the DreamVille roster since you’ve been down?

Cozz: It’s been great. I haven’t had the chance to physically work with anybody like directly in the studio with [J.Cole] or in the studio with Bas. I been in the studio with them and watched them work or they watched me work but it hasn’t been like a real work session yet. Besides the work, we all click. It’s genuine. Everybody is normal people. It’s no crazy shit going on. We all click on a real personal level. Cole is a regular dude. Bas is real cool. It’s just a family.

DX: We hear one of the reasons you went with Dreamville is you wanted the creative control over your music and you feel like they give you that. What do you feel they offer you other than that?

Cozz: Other than that, just being on Cole’s label is gonna up my ability because I’m a competitor.  J. Cole is one of the top lyricists in the game. So when it comes to that, I’m trying to beat out J. Cole. I feel like that will bring out another side of me. Secondly, J. Cole is just fucking dope. He’s a mentor too. He’s like a big brother rather than a boss.

DX: On the opposite end, what do you feel like you bring to the table for DreamVille?

Cozz: I feel like I bring a new energy, a brand new energy. I’m young. I’m like the youngest dude in the group by like 10 years. I just turned 21 so a new energy. I’m from the Westside. I got my West Coast swag to it. I grew up in the hood so I bring a little bit more grittiness to it but still lyrical at the same time.

Cozz Reveals Dates For The Tour & What New York Is Like

DX: Since you’ve done the project,we’re sure you’ve traveled.  You’ve been doing press and stuff like that. What types of things have you come across or what type of things that have influenced you since the release of the project?

Cozz: Just life, like you said, traveling and shit. I’m in New York right now. This is only my second time in New York ever — Traveling, performing. I never performed until this year. My first time doing that shit too. I’ve been getting a lot of knowledge and new experiences that I could write about now. At the same time, I’m still at the crib, on my block. I haven’t moved out yet. So I’m still there. I’m still at home base. I’m still presenting a regular life but doing other shit too.

DX: What would you say are the differences between New York and California with you being out there for the second time but being so California?

Cozz: It’s totally different, which I love, ‘cause I hate being in the same situation. New York people are a little ruder, which is cool with me. I don’t give a fuck. Everything is different the way people get around with trains and taxis and flagging taxis down and shit and big ass buildings and shit.

DX: You got Cozz and Effect out now, and like we said multiple times, that was done before aligning with DreamVille, what is the move going forward?

Cozz: Just keep spreading Cozz and Effect and keep working and staying in the studio, keep writing that fire. I got this tour coming up next month, a little short one, five cities [in] five days or whatever. We gonna keep working, that’s the move. Work, work, work work.

DX: What are those cities you’re going to be hitting up?

Cozz: Atlanta, Chicago, San Francisco, New York, and back to L.A., hometown. That starts on the 14th of November.

DX: You got the date for the LA show?

DX: With you dropping your project recently, how do you feel about people saying this is one of the worst years in Hip Hop?

Cozz: I think that’s a lie. We got a lot of good shit coming out this year. It’s still fourth quarter, people are still dropping shit. I feel like you can’t really speak yet. They gotta wait. My project, I’m brand new, so a lot of people still haven’t heard of my shit.