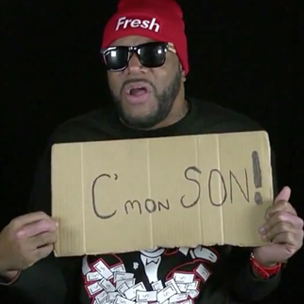 Ed Lover is a legend in his own right. With a career that spans over 20 years, the Queens, New York native extended Hip Hop’s reach from the inner city streets to living rooms across the globe as the co-host onYo! MTV Raps. He was the headliner on top rated morning radio shows in New York and Los Angeles and coined the phrase and movement “C’mon Son!” a series of YouTube videos poking fun at the absurdity of celebrities.

A Hip Hop resume like this ensures one thing: a lot of amazing stories about the music business and Hip Hop’s favorite rappers. So when the Backspin Channel DJ at Sirius XM Radio recently stopped by Cipha Sounds’ Hip Hop Improv Show at UCB Theatre in lower Manhattan, he had plenty of stories to tell. The crowd roared as he shared the story of meeting Robert De Niro, who recognized him from MTV, but couldn’t quite get his name right (Dr. Ed? Lover Dre?). Ed just wanted to shake the hand of the Academy Award-winning actor and express his admiration, and all De Niro wanted was an introduction to the lovely ladies of En Vogue. Ed obliged.

HipHopDX sat down with the guy who the Ed Lover dance is named after to discuss Yo! MTV Raps, C’mon Son! and the significance of Dr. Dre possibly becoming Hip Hop’s first billionaire.

Why Ed Lover Says “Yo! MTV Raps” Is A Global Phenomenon

HipHopDX: Tell me about the significance of Yo! MTV Raps?

Ed Lover: When it’s all said and done, MTV Raps is going to be looked at as the show that took Hip Hop global. Throughout my travels around the world, I run into people who say they learned to speak English because of Yo! MTV Raps. That’s the difference between Yo! and other national or regional Hip Hop shows that were on TV at that time. MTV was a global phenomenon. Even in the United States, there were a lot of places where Hip Hop wasn’t played on the radio. They didn’t have a Mr. Magic or a DJ Red Alert. And Yo! MTV Raps was their way to get Hip Hop. The impact in the United States was amazing, but globally it was phenomenal.

DX: Do you think Yo! MTV Raps could exist today?

Ed Lover: No, it was a special time. I don’t think it could find hosts like Dre and I or Fab 5 Freddy. You would have to get someone who is not involved in Hip Hop whatsoever. We didn’t try to look cooler than the guys who came on the set. We were fans before anything else. We were just happy to be there…happy to be interviewing these guys.

DX: Let’s talk Rap City. Was there ever really a battle between Yo! and Rap City?

Ed Lover: There wasn’t really a battle because Rap City wasn’t global. Their hosts couldn’t get off the plane in London and have 40,000 people at the airport. MTV was a global brand, so there was no competition.

DX: Was it a natural transition into radio from TV?

Ed Lover: No, at first I didn’t want to do radio because Yo! MTV Raps was a one day shoot. We worked on Thursdays, and had the rest of the week off. Radio came around, we knew our contract was going to end soon with MTV and I needed that steady income. I had a great manager by the name of Charles Stettler who sat us down and said, “This is what you can make in radio if you work hard. You can make a great living.” I was like, “Okay, good. My parents always taught me that opportunity only knocks once.” In my first show on Hot 97, you can hear me say, “I don’t know if this for me.” It was 5:00 am in the morning, and we were used to going to MTV in the afternoon.

DX: What’s the best and worst part of satellite radio versus traditional radio?

Ed Lover: Satellite still has some rules. In terms of what they can play, or how many times you can play an artist. Also, it’s not free, and there are a lot of people who just refuse to pay for radio. The great part of it is they will listen. If you pay for something, you will use it. You have a more loyal listener on satellite than traditional.

Ed Lover: It was the most natural and organic thing I’ve ever come up with. It started with a beef between Jeezy and DJ Drama. Jeezy had a party for his new label and hired Drama to DJ. Gucci Mane was hot at the time, and Drama was playing Gucci songs at the party. Jeezy got mad, and they kind of got into a squabble about it. But I wanted to speak on it, so I made a blog on my laptop. I didn’t know how to make words crawl across the bottom of the screen, so I grabbed a piece of cardboard and wrote “C’mon Son” and held it up. I gave it to my friend Nelson over at ThisIs50.com, they put it up and it got 40,000 hits. And I was like, “They’re killing me in the comment section,” and he was like, “Fuck the comments, they’re watching. You got to do another one.” And it kept going from there.

DX: What’s the your favorite interview you’ve ever done?

Ed Lover: For radio, it was Oprah. It was a surprise. I told Jamie Foxx during an interview, “You’re cool with Oprah, she needs to come do radio.” Jamie told Gayle, and one day Gayle and Oprah were in New York, and Gayle says, “Oprah, we need to go see Ed Lover. Jamie says he’s the man.” And they just rolled up.

On MTV Raps, it’s between Bill Cosby and James Brown. James Brown is the foundation of Hip Hop, and for us to have him for a week of shows meant something. And Bill Cosby, I looked up to as a comedian my whole life. For Bill Cosby to call me at home and tell me he watched MTV Raps and want me on The Cosby Show was amazing.

DX: What do you think of Dr. Dre becoming the first billionaire in Hip Hop?

Ed Lover: It’s absolutely wonderful. It shows kids that Hip Hop is a viable career. It’s not a passing phase or hope. I’ve been living, breathing and eating off of Hip Hop for 25 years. You can use your popularity to put products into the marketplace and be successful. It shows kids that you can come from a place, work hard and walk a straight path and then end up at this place, ’cause Dre had some problems when he was young…the whole Dee Barnes thing. It’s not the same Dre that sang, “One Less Bitch to Worry About.” That’s what you’re showing these young people: that you can really make something of yourself and grow up to be a billionaire.