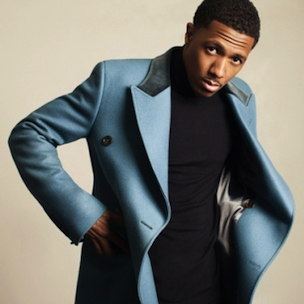 Thinking of Nick Cannon as a rapper feels incomplete, but not incorrect. Before All That, before Drumline and his TeenNick chairmanship, the San Diego native spent a portion of the 1990s rhyming as a part of Da G4 Dope Bomb Squad—so he’s been kicking raps nearly as long as he’s been dropping jokes. The disconnect is interesting in retrospect. For many, if not most, Nick Cannon is synonymous with Nickelodeon. But the actor, comedian, producer, entrepreneur, radio personality—and, yes—rapper touches too many supply chains to pigeonhole. Last year, his brand of Monster headphones notched $30 million in sales. His line of signature ties are available in Macy’s nationwide. He’s reviving Wild ‘N Out and Soul Train simultaneously. He’s N’Credible. He’s a renaissance man.

This conversation covers 16 years of Nick Cannon history in seven minutes. Hours before the listening session for his upcoming project, White People Party Music (available April Fools Day, appropriately), Cannon reflects on his relationship with Will Smith—who he credits with giving him his first record deal—and why he needed to take a step back from reviving Soul Train. He also details the career risk incurred by going “Gigolo” and R. Kelly’s role in helping him shed his kid-friendly reputation.

HipHopDX: Early in your career [when you were in the group] Da G4 Dope Bomb Squad, you guys opened up for Will Smith while on tour. Later in your career you played a role in Men In Black II. What’s your relationship like with Will Smith?

Nick Cannon: Man, I consider Will like a big brother more than anything—somebody who really gave me my first record deal, my first television deal. [When I was] 17-years old, he kind of took me under his wing and showed me the ropes. From that point on—even to this day—if I need something, I can call him for advice or whatever it is. So he’s always been like a big brother in the game to me.

DX: Will Smith’s talked extensively about how difficult it is for him to focus on acting and music. Your headphone brand did $30 million in sales last year. You have ties available in Macy’s. You’re the chairman of TeenNick. It’s been 11 years between your two albums. Do you ever run into the same challenges Will Smith’s described?

Nick Cannon: Not really. I think I’m probably built a little differently. I like having a lot of stuff going on and still can focus. I feel like having several things going on actually helps me focus. That could be my ADHD talking, but one hand can kind of feed the other—keep the engine going even when things may not be moving as smoothly. That’s how I like to function. It’s like, keep cooking while the fire’s hot. Keep a bunch of irons in the fire. I think where other people maybe say, “I gotta focus on this. I gotta focus on that.” I understand that mentality but mine is kind of the opposite. If I’ve got several things going on, that actually helps me focus.

DX: You always seem to have seven or eight things going on at the same time.

Nick Cannon: My schedule is crazy, but other than that, it just drives me. It wakes me up everyday and gives me the opportunity to say, “Hey, if this one don’t work out, then we got the next thing.” It doesn’t allow you to just linger on anything. It’s always forward momentum. I just like to be busy more than anything. I don’t like to just sit dormant.

DX: Where were you when you wrote “Gigolo”?

Nick Cannon: I was in Chicago in R. Kelly’s studio. The funny thing about that song is this: I heard the beat. I picked all of these beats and heard that one specifically. He was actually in another room working on another song for me. The idea is interesting because when I worked on that album [Nick Cannon], everybody had a mindset of what they thought my music should sound like. From Pharrell to Diddy to R. Kelly—I was the kid from Nickelodeon and Drumline. Even the [Jive Records] was like, “Oh, we have to be kid friendly. We want to do this for the kids.” And that’s just not me. I know how to play that role very easy but that’s not the music I listen to. That’s not what I grew up on. That’s not the type of vibe that I was on. So I had the beat and said, “I’m just gonna write the song I want and what I would want to talk about.”

I did these verses thinking, “Oh, this is something for me.” I left the studio and came back and R. Kelly’s like, “Yo, I put this hook on that. It’s crazy! I called it ‘Gigolo.’” I was like, “I like that!” He was really the only person that I worked with who was willing to go more in the direction of the type of music that I went with. Even then, I didn’t think the record label was gonna like it. A month later I was on the road and the label’s like, “Yo, this song ‘Gigolo’ is going crazy at radio!” I was like, “Really? Let’s rock with it.” It’s funny how that works out. Nobody really wanted to go in that direction but it’s the one that worked.

DX: That song peaked at #24 on the [Billboard Hot 100]. It sounds like it was a reputational risk for your brand at that time.

Nick Cannon: Absolutely. It’s the kid off of Nickelodeon talking about always being surrounded by so many hoes. [Laughs] It was definitely a risk. But it was fun music and it allowed me to grow up but be youthful at the same time. That’s really what my brand is about. It’s really about having fun.

DX: Is it a risk now putting out an album entitled White People Party Music?

Nick Cannon: [Laughs] No! If anybody thinks it’s a real risk, they’re ridiculous. That’s the whole thing: It’s a title that creates conversation. It’s funny because I’ll look online and you’ll see certain people saying, “How in the world can he name his album White People Party Music? If somebody made an album called Black People Party Music, what would he think?” I’m like, “I would think it’s hilarious!” [Laughs] Just based off of the idea where people take themselves so seriously. I’m trying to show that that’s not really what it’s about. White people love me and they know how to have a good time. I’m just putting it all together. [Laughs]

DX: Do you make music with sales in mind?

Nick Cannon: I don’t. In my mind, if I could, I would give my album away for free. I’m still trying to figure out how to work that out. Like, you buy a pair of headphones and you get my album for free. That’s the marketing goal I’m going with. But I think that’s what it really should be about: Giving music to the people who want to hear it. The people who don’t, so be it. I honestly feel like we’re coming up on those times where music is going to have to be free. You’ll be able to sell the experience of music, whether through live performance, subscriptions and all that type of stuff. The actual music is almost more of a marketing tool to get people to purchase other things. I feel like that’s the direction things are going in. In that sense, when you think of my company—N’Credible—as a whole, one component is that we have a record label. To be able to have consumer products, consumer electronics and several platforms from digital to film to television; to be able to have this one-stop-shop to say that we know how to sell an experience—I think that’s my ultimate goal.

Nick Cannon: There’s more pressure trying to revive one because people already have a mindset of what they liked and disliked about the original and if you alter that in any kind of way, they’re going to hold you to the fire for it. To create something new, you get that newness. You get some people who are gonna love it just because it’s new and some people are gonna be like, “Hey, I don’t mess with it” until it grows on them. You don’t get that reviving a property. You get instant judgment. That’s why I take my time with a lot of that stuff. I was actually rushing into Soul Train. I personally took a step back because I don’t want to get it wrong. There are a lot of expectations on it so I want to make sure it comes off the best way possible.

DX: Which childhood memory do you wish you had Instagram for?