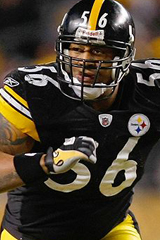 LaMarr Woodley: Back In Black

Coming off a fresh Superbowl victory, the Pittsburgh Steelers may be headed towards a restoration of their 1970s “Steel Curtain” glory days.

One of they key components of last season’s championship team is linebacker LaMarr Woodley. He is the young gun among Linebackers James Harrison and James Farrior, Safety Troy Polamalu summing up the feared defense ran by the aggressive and genius mind of Steelers Defensive Coordinator Dick LeBeau. The University of Michigan standout knows what it takes to earn respect on and off the field. At this early stage in his career (second in NFL) LaMarr Woodley appreciates the honor of playing for great coaches and a organization that takes pride in its players, coaches, and even the fans. With that being said though please do not take LaMarr Woodley‘s kindness for a weakness as you know back in in Ann Arbor days at Michigan the slogan was “Guns don’t kill people. LaMarr Woodley kills people.”

The limelight-loving Woodley spoke to HipHopDX about his team, his college days, and the leaders and fans that proudly wave the literal and metaphoric Pittsburgh Steelers flag.

HipHopDX: With pre-season and training camp ending, are you ready for this upcoming season?

DX: Speaking on the off season how was things coming off such a strong and successful Superbowl season?

LaMarr Woodley: Aw man, I did a lot of things after the Superbowl. I got to go on 106th & Park with my teammate Willie Parker. I went down and did ESPN on the weekend, Rip The Runaway show with BET, Jim Rome‘s show, a commercial for EA Sports, and went to the Espy