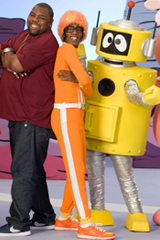 Back when Hip Hop was still attached to its roots, Biz Markie was [and continues to be] a respected mainstay. Though the Juice Crew funny man made a name for himself with his humorous rhymes and master-level beat-boxing in the early and mid-eighties, his biggest single, “Just A Friend,” dropped in 1989 catapulting him into a mainstream pop-culture icon. Who hasn’t howled off-key at the top of their lungs to the unforgettable lyrics “Ohhhhh baaabbbbbyyyy youuuuu!…got what I neeeeeeed”?

Needless to say, Biz embodies the word “entertainer”: a rapper/ beat-boxer/ deejay/ comedian and self-proclaimed kid at heart. This week Biz sat down with DX to chop it up about everything from his mutual respect for living legend Big Daddy Kane, to the lost art of Hip Hop, to beat-boxing for the kids on Nickelodeon’s “Yo Gabba Gabba,” reminding us once again of why “Nobody Beats the Biz.”

HipHopDX: You’re no stranger to TV, you’ve been on everything from the “Chris Rock Show,” “In Living Color,” and “Wildin’ Out.” So how did your ‘Biz’s Beat of the Day’ segment on “Yo Gabba Gabba” come about?

Biz Markie: My boys told me they were gonna start a kids show, and I said, “Yeah, I’ll do it,” simply ‘cause they were doing something for the kids, and there ain’t really nothing out there for the kids right now.

DX: Have you seen the YouTube videos of the kids trying to beat-box along with you at home?

Biz Markie: No, haven’t seen that yet.

DX: One of the things about the show that resonated with me is that the producers chose you, a real Hip Hop living legend, when they could have chosen any random amateur for the job like many TV programs do. Do you think that decisions like that are important when it comes to preserving the history of Hip Hop and honoring the pioneers?

Biz Markie: I think that’s the reason they chose me—because they can see the youth in me. Most of the stuff you see me doing is stuff kids would do anyway. I don’t really do no serious stuff anyway.

DX: I think Hip Hop, especially within the past few years, has gotten more criticism for explicit language and misogyny than praise for the countless artists with more refined things to say on wax…

Biz Markie: You’re right. If a record don’t got no booty or money in it, they’re not playing it.

DX: Exactly. But that’s why I think shows like “Yo Gabba Gabba” are so important to Hip Hop. Because when mainstream America decides to introduce music to children, they don’t want to show them rap. Because all they see is booty shakin’ and money makin’, and sellin’ drugs…when real Hip Hop heads know there’s a whole other aspect to the genre. So I think it’s really great that you can help convey the idea that Hip Hop can be for the children and it can be fun again.

Biz Markie: I wanna do a kids show where we doin’ all the old stuff that we used to do as kids—double dutch and patty cake, and whoever wins gets a prize. We gotta reward kids for doing good because we don’t see that anymore. We gotta keep these kids’ self esteem up. Because the lower their self esteem, the more likely they are to turn [delinquent].

DX: Recently we did a feature on Big Daddy Kane [click to read], and he had some really great things to say about you. Some of the quotes I have here are: “When I first came into the industry Biz [Markie] was teaching me a lot. And this was before he even had a deal. But he was just teaching me a lot about performing, and just shit [you need to know as an artist]… when I got to the top, I felt like I owed Biz a whole lot. I still feel like I owe Biz…If dude didn’t believe in me I probably wouldn’t have a career…Biz was the person that brought me into the business. So I’m forever thankful for that.” How do you respond to hearing those words?

Biz Markie: Well, me and Kane was boys. We were friends. I mean, we still are friends, but I’m just sayin’ we was friends so that it wasn’t a matter of [doing a ‘favor’ for Kane]; I just wanted him to be where I was at. He was younger, and I was showin’ him the way. I wanted whoever was with me to be just as successful or more than I am. I just wanted him to feel how I felt. He wanted to be a rapper, and I showed him how to do things. For anyone that doubted him or doubted me, I wanted them to see that hard work does pay off.

DX: So we’ve spoken about pioneers, now what about looking forward? How do you feel about the direction Hip Hop has taken within the past few years?

DX: Do you think there are certain artists who are bringing it back to the art-form right now?

Biz Markie: People are bringing it back to the art-form, but once they make it big, they’re tearing away from it. When I made it big, I still stayed in my lane. I made funny records like “Pickin’ Boogers”. But I guess some people start listening to their record labels tell ‘em otherwise.

DX: So what do you think it’s gonna take to bring Hip Hop back to its roots? Or is it too far gone?

Biz Markie: I think what its gonna take is more records that don’t need videos in order to hit the radio waves. If you don’t have a video attached to it, [radio deejay’s] aren’t playin’ it at all. It’s kinda like video games today. Video games are so realistic now that people forgot that kids used to use their imagination when playing games like Pong on Atari 2600. They didn’t care if it was the best graphics, they cared about the game and just wanted to win.

Biz Markie: There’s a lot of good people right now. There’s just a lot of people institutionalized by the industry. People gotta stay real to Hip Hop. You don’t have to be thugged out—just make good records. I also think there should be more clubs out there that showcase talent.

DX: We are in the beginning of 2009 right now—what’s the one trend from Hip Hop in 2008 that needs to be left behind for this New Year?

Biz Markie: The fighting. Everybody is getting’ money right now, but they fightin’ to get more dough. You can’t even go to an awards show without a fight. The South is stickin’ together record wise but they fightin’ too. All the fightin’ needs to stop. Or if there’s gonna be a fight, do it in a boxing ring and have the ticket money go to the kids in the community. Rappers are trying to cut and steal and kill and put it up on [the Internet], and that needs to change. Kids is lookin’ at the Internet, and that ain’t right.

DX: Speaking of “change,” there’s obviously a lot going on the world right now, and right here in our country. How do you feel about President Obama so far?

Biz Markie: I met Obama three or four years ago, and I’m glad that [he was elected]. We need a fresh new start from what happened the past eight years, and the only way we could have that start was with someone [with new ideals]. Look, from his election alone, gas came down almost $2.00 [per gallon]. That’s what you gotta look at. Change is needed, and I think he’s the right man for it. People will see that and re-elect him in four years. If a black man can become president, then a lot of other things in this country can change too. We can change. It aint gonna be about black and white anymore. It’s gonna be about rich and poor. We gonna take care of each other more.

Biz Markie: I’m working on a pilot for a reality show coming out. I’m still deejaying, and I’m thinkin’ about doing a new album. [There’s no release date]; I’m taking my time with it. I’m doing like I used to do it. I’m doing it for fun. I’m not doing it for money—I already got money [laughs].

To purchase the Yo Gabba Gabba soundtrack [click here].