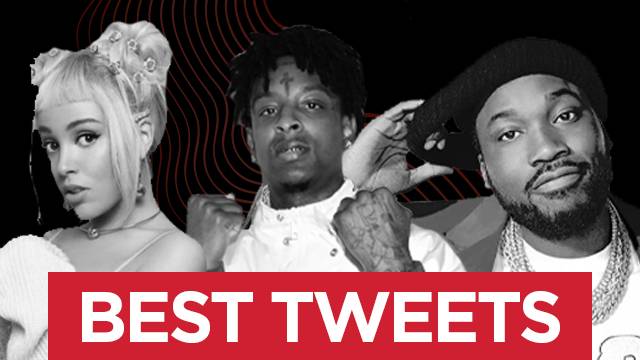 At the end of every year, the team at HipHopDX likes to review and recap the most important things that happened in our culture. We look back at the Beef’s, the best rappers of the year, some of the best rap lyrics in the game, as well as recognize the overall best. So check all that happened in Hip Hop in 2019 or click here if you want to see the full list of Hip Hop Awards, nominees and winners.

Twitter: home of Lil B curses, the occasional Kanye West rant and where trigger fingers turn to … you know the rest. Over time, rap has made its presence known on Twitter while providing artists with a platform to directly connect with countless fans now at 280 characters at a time. Our favorite artists, entertainers and influencers use the site as an outlet to vent without a filter, as well as to promote their latest work. With 330 million monthly active users to interact with, feeds can sometimes get overwhelming, which is why HipHopDX curates a list of the week’s best and most memorable tweets from the Hip Hop world.

For this special edition of Tweets Is Watching, DX put together the best and most memorable tweets of 2019.

To the people getting mad at my garbage ass "freestyle" on Sway. I don't have to know how to freestyle. Go have a cypher in a fucking Wendy's bathroom and fuck off.

Doja addresses the backlash from her Sway In The Morning freestyle.

What’s the first thing that come to mind when you hear…”Polo G?” pic.twitter.com/ihziANwshP

Yo it never seems odd to you guys that these guys always get arrested after they come up? Ice wants 21, Blueface got popped last week and now Baby 🤔🤔🤔🤔🤔🤔🤔 https://t.co/OiwN4qYANb

Van Lathan (and many others in the community) are suspicious of the successful-rapper-getting-arrested trend.

🙏🏽🙏🏽 For #32 Cedrick Benson and his fam. My condolences. Packer 4ever. Love everyday.

Lil Wayne, who logs onto Twitter once in a blue moon, sends his love to the late Cedrick Benson.

My brother @ScHoolboyQ dedicated his life for another milestone. I got the honor to watch and learn. You did it again soloist. 🙏🏾 https://t.co/oUa2NEYfjf

And dedicates one out of his four Tweets this year to ScHoolboyQ.

who drew the first santa clause ??

realizing that sonic has 1.3 million different drink options is amazing

Hell no she would never look at me

Lil Uzi Vert loves Rihanna, but knows she’s not in the cards for him.

I feel like dropping a new tape … introducing a new personality 💁🏽

I can prove myself a thousand times and ppl will still think I’m lip syncing on stage just because they think it’s impossible for my voice to sound like it does on my songs. Get that negative energy outta here bro🤦🏿‍♂️ not all artist are lying to you. Have some faith in somebody.

T-Pain speaks out amidst lip-syncing rumors

r we excited or na

A Kehlani teaser went viral, causing the artist to drop the track early, despite allegedly having no plans to do so.