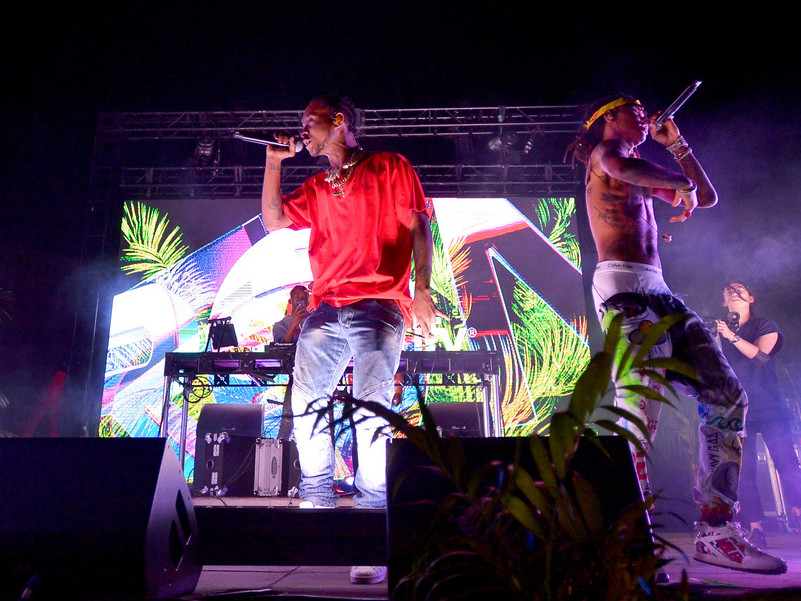 Anytime you go to a show and they’re passing out gas masks, one should expect nothing but pure litness.

That was the scene painted at Spotify and Rae Sremmurd’s post-apocalyptic party in Downtown Los Angeles on Monday (May 7). More than 300 fans swarmed the area to witness the invite-only event in person, as did YG, Gashi and Mike Will Made-It, the architect for all things Sremmlife.

The call for such a cinematic visage was, of course, the release of the Brothers Sremm’s third studio album, SR3MM. The latter title represents the first of three digital discs that highlight the duo’s traditional back-and-forth rowdy anthems. But the following two albums, Swae Lee’s SwaeCation and Slim Jxmmi’s Jxmtroduction, are the solo albums most pundits deemed as inevitable following the success of French Montana’s “Unforgettable,” which pitted Swae into a solo spotlight of his own.

All doubts regarding whether either of the Black Beatles could hold their own on stage were erased when the Honorable Swae Lee arrived into the compound on a throne carried by dancers dressed for the banana fields.

Between his Young Thug-assisted record “Offshore” and “Guatemala,” instantly recognizable for its island-tinged harmonies, Swae had everyone sitting vicariously on a beach chair as he commanded his shipping container stage. And after Jxmmi made his grand entrance on the flatbed of a truck equipped with a bottle of Hennessy, freshly wrapped blunt and several stacks of one dollar bills, the mood reverted to the swampy roots the Mississippi boys once encompassed before the glittering big city lights. Live renditions of “Changed Up” and “Chanel” hammered home his point, as did the money shower he blessed the audience with. (Full disclosure: I made out with $10 just from standing there.)

For the finale, Rae Sremmurd reconnected on the center stage to blaze through SR3MM tracks “CLOSE,” “Touchscreen Navigation,” “42” “Bedtime Stories (backed by The Weeknd’s vocals) and their latest hit, “Powerglide.” With the gripping amount of new material on hand, it should be noted the boys didn’t perform any of their existing hits, allowing the crowd to be conditioned for the latest and greatest.

When the notion of “Black Beatles” was brought up, they ripped through the SR3MM cut “Rock n Roll Hall of Fame,” which is technically a better record than its Paul McCartney-pleasing predecessor but doesn’t have a challenge attached to it (yet).

With pockets a few dollars richer, new songs to target for playlists and even a few fans lucky enough to swig Jxmmi’s Henny, it’s a safe assumption to say the night was a win.