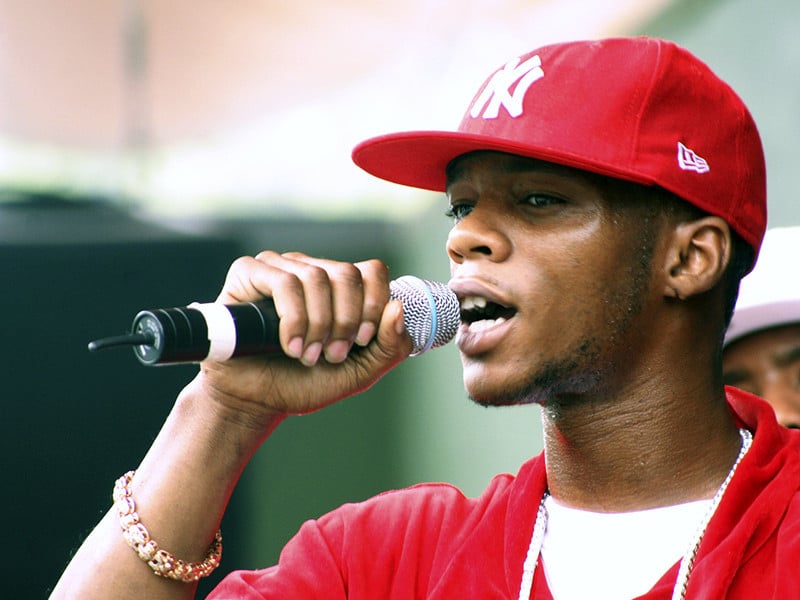 Welcome to the first installment of Legendary Mixtape Runs, where HipHopDX takes a look back at some epic mixtape series from yesteryear. We’re not talking about streaming “mixtapes” that are all the rage now; we’re talking straight up mixtapes — the ones you used to buy at barbershops, bodegas or hand-to-hand on your local campus.

Before SoundCloud rappers were taking over the game off one or two songs, mixtapes reigned supreme as the platform for artists who didn’t quite fit radio or TV — remember, this is pre-YouTube — to build a name for themselves outside of the label system.

This series will explore the origins and highlights from some of the brightest stars who rose to notoriety during the golden-era of mixtapes (2004-2009). For DX’s inaugural piece, we look no further than Brooklyn’s own Papoose.

Coming up in the same section of New York City as The Notorious B.I.G. and JAY-Z, Pap was recognized pretty early on for his bars. The first trace of him on wax was alongside a legend, Kool G Rap. Pap appeared on “Home Sweet Funeral Home” from G Rap’s second solo LP, 1998’s Roots Of Evil.

He eventually scored himself a record deal, but it didn’t go anywhere. Frustrated, he began to craft mixtapes in the hopes of catching a buzz.

It wasn’t until 2004 that Pap began to assert himself. After aggressively promoting himself to DJ Kay Slay outside of Hot 97, the DJ saw the spark and — for lack of a better analogy — became the Puff Daddy to his B.I.G.

Kay Slay believed in Pap so much that he created an imprint (Streetsweepers Entertainment) just to promote the Brooklyn MC’s music. Between 2004 and 2006, Pap released 15 mixtapes packed with high profile features by the likes of Akon, Prodigy and Busta Rhymes. In 2006, he ended up signing with Jive (in association with Flipmode and Violator Management) for $1.5 million, which he celebrated on his 15th tape, The 1.5 Million Dollar Man.

His long-awaited studio album, The Nacirema Dream, however, faced a staggering amount of delays and didn’t see the light of day until 2013 — almost a decade later.

While it managed to crack the Billboard 200, it didn’t perform that well commercially, nor did its 2015 follow-up, You Can’t Stop Destiny. As a result, he’s failed to become a mainstream mainstay, unlike some others who burst onto the scene during the same period.

His marriage to Remy Ma and a storyline on Love & Hip Hop have helped keep his name ringing with a new demographic, but a lot of younger listeners may have missed the classic material that — at one point — commanded a bidding war between labels scrambling to sign the kid who Rakim himself praised during an interview in the Village Voice.

All of Pap’s projects have been released independently except for 2006’s Best Of Papoose, which he dropped during a brief stint with Flipmode. To date, he’s released 29 mixtapes (yeah, read that out loud), and two albums.

His catalog is more daunting than starting Game Of Thrones from scratch, so DX has taken the liberty of breaking down five must-listen Papoose mixtapes from 2004-2006 to help guide new listeners.

The Beast From The East

This was Pap’s third mixtape. His first two had the style and skill one would expect from him but seemed less curated than this project. Having built a reputation for being incredibly lyrical, this tape’s collaboration with Canibus (who was over a decade away from his Dizaster disgrace), was inspiring.

Also, how can you deny bars like “When Slay introduce me to rappers, he says ‘here, this is breakfast Pap.’”

While not as dramatic as last year’s fateful election, Pap gave heads something to rock with on Election Day 2004. For anyone who had been following the rapper, this tape was a major comeup. He had features in the past but none at this level. He traded bars — and bodied — Jadakiss and Styles P on “The Hood.” It also featured higher-profile production, like the Prodigy and Grafh-assisted “Two Step” produced by Alchemist.

It also featured the first collaboration with his future wife Remy Ma and the first appearance by his Thug-a-cation crew.

Although Pap had built up notoriety with his first six tapes, Sharades is — without question — the tape that pushed him over the top. It contains the two best songs in his catalog: “Alphabet Slaughter,” which became a staple of his live show, and “Sharades,” a cool POV record about the Hip Hop police.

With such a large volume of tapes in a two-year span, there was bound to be some crossover — “Sharades” and “2005 Bonnie & Clyde” made multiple appearances. Unfinished Business often pops up in conversations about Pap’s best mixtapes since it collects some of his finest work.

“In The Bushes” with Ghostface Killah and “Do Or Die” with Memphis Bleek made people pick up the tape. But gems like “Mother Nature,” which centered around Hurricane Katrina, “Chess” and the remix of Nas’ “Black Girl Lost” make this a classic.

After a 14-tape comeup, Papoose landed $1.5 milli to sign an ill-fated contract with Jive Records. His subsequent mixtape, 1.5 Million Dollar Man, felt like a celebration. It was stacked with features you’d expect from a million dollar artist, like Paul Wall and Mike Jones on “Live From The Block,” Akon on “Ghetto Soldier,” The Isley Brothers on “Brotherly Love” and Busta Rhymes on “The Take Over.”

Highlights, though, have to be the 2006 remake of Shaq’s “Can’t Stop The Reign” with Bun B and “Haterz” with Maino.

This is the first installment in a new series. What Legendary Mixtape Run do you think we should look back on next? Let us know in the comments below.