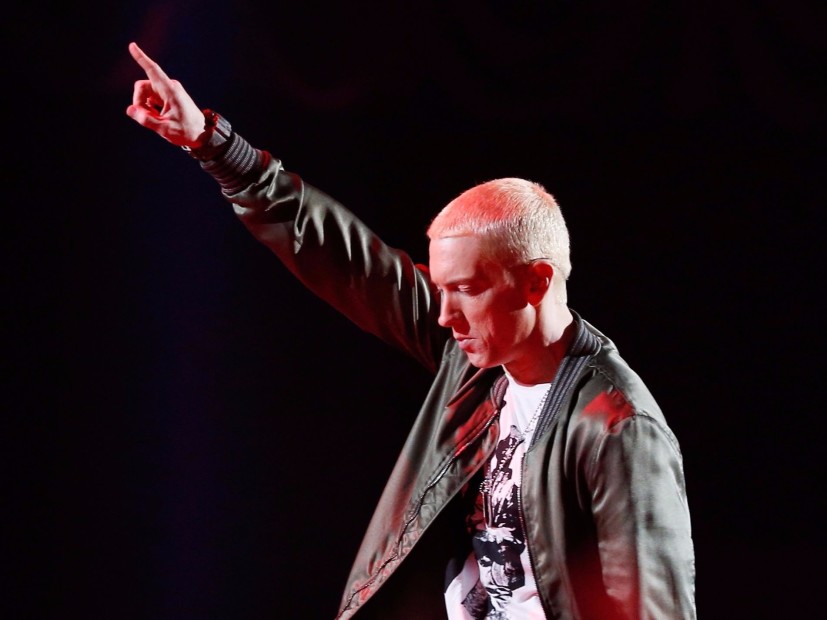 The 2017 BET Hip Hop Awards aired on Tuesday night (October 10) and following Eminem’s monster freestyle, social media blew up with colorful opinions on Em’s verbal crucifixion of Donald Trump. While many applauded Slim Shady for his ability to crush his opponent (in this case, #45), there were some who scoffed at his performance, claiming he took the easy route and simply regurgitated what black MCs have been saying for years. (For example, YG and Nipsey Hussle’s 2016 anthem “Fuck Donald Trump.”)

The FULL verse that EVERYBODY is talking about! @eminem BODIED THIS! #HipHopAwards pic.twitter.com/zoS0wEwjQF

Yes, that’s partly true, but Em’s freestyle was still a major win for Hip Hop and more importantly, for America.

Here’s why — for one, it got a white guy like Keith Olbermann to shut up and listen for a second. Prior to Em’s freestyle, Olbermann — author of Trump Is F*cking Crazy (This Is Not A Joke) — admitted he had his doubts about rap.

On Tuesday night, Olbermann wrote via Twitter, “After 27 years of doubts about rap I am now an @Eminem fan. Best political writing of the year, period.”

And while it’s disappointing that it took a white MC to make someone like Olbermann wake up, at least he’s finally listening.

From bars about Colin Kaepernick’s National Anthem protest and Trump on the verge of causing a “nuclear holocaust” to racial injustice and gun reform, Em spit with such conviction on a variety of hot button issues, that it clearly caught everyone’s attention, including so-called “liberal” white Americans who lack an understanding of the very topics Em was dissecting during the nearly five-minute freestyle.

After 27 years of doubts about rap I am now an @Eminem fan.

Two, Eminem’s reach is massive. Over 2.1 million people have already tweeted about his BET appearance. The fact he used his platform to speak out about the issues currently plaguing our country is commendable on its own. Much of popular mainstream rap right now isn’t saying anything of substance, including some of the artists picking up awards at the BET Hip Hop Awards ceremony. Unfortunately, their platforms are exponentially bigger than the underground “conscious” rap that could be capable of sparking a conversation if enough people were interested in listening to it.

The “Cash Me Ousside” teen has a Billboard Hot 100 song right now. Let that sink in. I’ll listen to Em spit bars like that all day long if it means putting the focus back on music with grit and meaning instead of a lot of the vacuous garbage floating around right now.

Like DJ Scratch wrote on Facebook (and A Tribe Called Quest’s Jarobi White shared), “[Em] made every rapper at the awards except Mysonne look crazy because this generation of rappers don’t give a fuck about social issues. Meanwhile they are the ones being directly affected by it.

“And yes, plenty of MC’s BEEN saying what Eminem said, but there’s a huge difference between YouTube & Television,” he continued. “The reach to youth is a bigger. So instead of a few people being mad about Eminem speaking up for our plight, be angry at the 100 popular rappers that were there that didn’t, haven’t & won’t say shit on behalf of our plight. I applaud him.”

Em’s freestyle also came with further approval of Hip Hop pillars like Sean “Diddy” Combs, Public Enemy’s Chuck D and Snoop Dogg, a testament to the undeniable impact Em has had on the culture since finding commercial success with 1999’s The Slim Shady EP.

The E GOD is lethal here on #TrumPotus https://t.co/auVbQ0nGgT @Eminem

Snoop Dogg to Eminem: “Always knew you was a real n***a.” pic.twitter.com/PrWB71AvrB

You can complain all you want that it was a white MC who set off a rampant firestorm of dialogue about the “orange” joke sitting in the Oval Office, but he had an ideal platform and used it correctly. Not only that, but THIS IS WHAT HIP HOP IS ABOUT. Since its inception, it’s been a voice for the voiceless and a way to speak up for the oppressed.

Bottom line, Em used his reach to call out the bullshit while he had millions of eyes on him. And while it’s understandable that some people have a problem with some of Eminem’s lyrics that touch on rape and misogyny, and use homophobic slurs, at 44, he’s been sober for years and has likely done at least a little growing up. Naturally, his content should evolve with him.

Not only that, do they even know who the POTUS is right now? Look up Trump’s sordid history. We all know it’s not pretty.

If it took a white MC who came up in the 8 Mile of Detroit to grab the attention of people who normally wouldn’t give Hip Hop a chance, so be it.

This is the time to do it.

And hey, at least Trump still has Kid Rock.