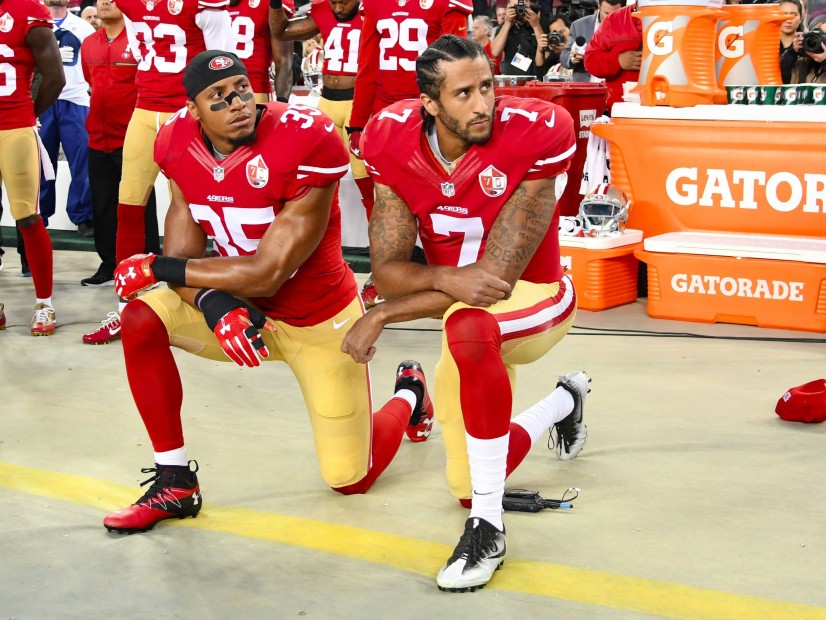 Donald Trump delivered a 90-minute speech in Alabama on Friday (September 22), which was reportedly in support of Senator Luther Strange who faces an upcoming primary election on Tuesday (September 26). Things took a left turn when Trump took aim at the National Football league and brought up NFL player/activist Colin Kaepernick.

At one point, he referred to Kaepernick as “son of a bitch.”

I Fully believe and have trust in this country, whoever is leading it, & for damn sure the Flag! BUT! This right here though is just out right a DAM DISRESPECTFUL thing to say! It is 2017 PEOPLE! EVERYONES BELIEFS DO NOT NEED TO BE THE SAME AS YOURS!! #WeAreOneWeAllBleedRed

“Wouldn’t you love to see one of these NFL owners, when somebody disrespects our flag, to say, ‘get that son of a bitch off the field right now?,'” Trump said. “‘Out. He’s fired. He’s fired!'”

Twitter erupted with reactions to Trump’s remarks and many stood in solidarity with Kaepernick, who famously took a knee during the National Anthem during an August 2016 game against the Green Bay Packers.

Guess that makes me a proud bitch!

THE LINE HAS NOW BEEN OFFICIALLY CROSSED!!! Time to show him and them #blackexcellence #LETSGO EVERYONE REPOST THIS ASAP pls!!!!

The crowd really approved of that, huh? Thanks 53%. Y'all still doing your thing, huh? https://t.co/4nt1IEaFtA

Your president basically called every @NFL player that shows concern about justice for Black people killed by police, a son of a bitch.

.@Kaepernick7 you're an american hero. we all know it and so will history.

Kap is now a legend.

The @NFL must protect its heroes and not be intimidated by Trump's attacks. They must be loud, unapologetic and forceful in their response.

The President is a son of a bitch.

I too have that movie version Playing in my mind sir https://t.co/WEPAdIT3qP

People… Using sports as a platform for PROTEST is nothing new… Do your History. pic.twitter.com/19nMgGLxAE

I call this the Kaepernick effect. And I like it. Athletes rise up and be as great as you can be! https://t.co/Vf50Bx2pOI