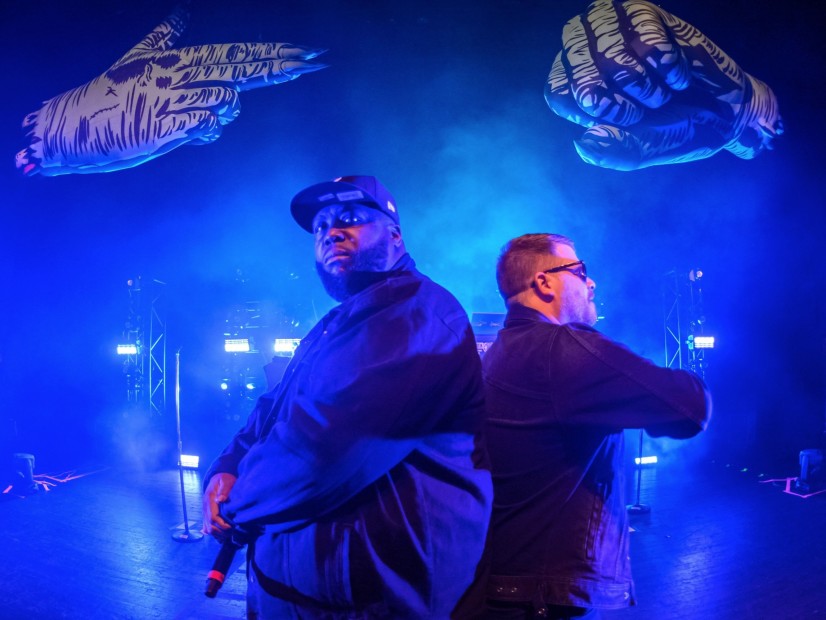 Although a black Cadillac Escalade was waiting outside their trailer to whisk them away before the rain started, the two outspoken MCs still took some time to discuss the current social and political landscape in America.

Mike, an Atlanta native who just launched a merch line essentially mocking the Confederacy, has been vocal about his political stances. Together, El Producto and the Outkast affiliate offered intelligent solutions to the ever-growing rift in the current political climate.

“As a black person, what I’ve always seen my white friends do is call out the bullshit when we’re not in the room ‘cause that’s when it really counts,” Mike told HipHopDX. “People in this country — whether through good manners or they’re just smart enough — know when not to offend others. But it’s just important to call the bullshit out when they’re not in the room when it’s just you and the people from your group or whatever power group.”

“For men, that’s men, and sometimes for white people, it’s white people,” he continued. “I think that’s important. Most people don’t want to be fucked up. If you take 10 racists in the room, seven of those are just people who have a hard time befriending people.”

Friendship is at the core of what makes Run The Jewels work. After Mike was introduced to the former Definitive Jux head honcho by Adult Swim’s Jason DeMarco in 2011, El-P signed on to produce Mike’s 2012 solo project, R.A.P. Music. They didn’t know it at the time, but that album was the beginning of what would become RTJ, a group that grew out of a genuine affinity between its members.

But what RTJ represents is far more powerful than what they could’ve predicted.

“We aren’t mad about it inspiring people because I would love to see kids in this country overcome … we’re given racism, classism and suspicions of one another,” Mike explains. “We’re kind of given that by our parents, aunts and bigger society. I’m happy to see kids coming up using our friendship and saying, ‘You know what? We cool.’ But that’s not why we’re friends. We’re just fucking friends.”

“We were friends first, but the power of the symbolism doesn’t escape us, especially in these times,” El added. “But it’s a byproduct of a genuine friendship. With all the complications and arguments and all the fucking this and that, and misinformation — you can’t really talk away friendship. You can’t talk away love. There’s no argument that says it’s historically wrong or right, you see two human beings up on stage and I think, yes, we now know that means something to people. Like I said, this is just the reality of our friendship. This is just the truth.”

Now three albums deep into their RTJ catalog (Run The Jewels 3 was released in December 2016), Mike and El are aware the younger generation of rap fans is going to grow up listening to their music. The fact it’s made by a black man and a white man is something they hope will have a positive impact.

“It’s cool to me to think there are kids coming up now that are going to have us as influences,” El said. “It’s not even that you know about it, but there’s a kid that’s simply more likely to get to know somebody that doesn’t look like him because he grew up like I did on music and culture of multiple races.”

Despite the tumultuous times, RTJ is confident there’s something positive bubbling up under the surface as a result of the recent uprisings.

“If you look at the last two years of marches, whether on media or on the ground, what you were seeing were black faces saying we’re being systematically oppressed and you saw a push back,” Mike explained. “What you have seen in the last two weeks [in the aftermath of Charlottesville] is white faces versus white faces. I don’t mean versus in some grand pornographic scale of violence, but I mean in the Civil Rights movement, the shift didn’t happen until whites said, ‘No this is wrong.’ I would say for the first time in my lifetime, I’m seeing white people challenge other white people in the streets.”