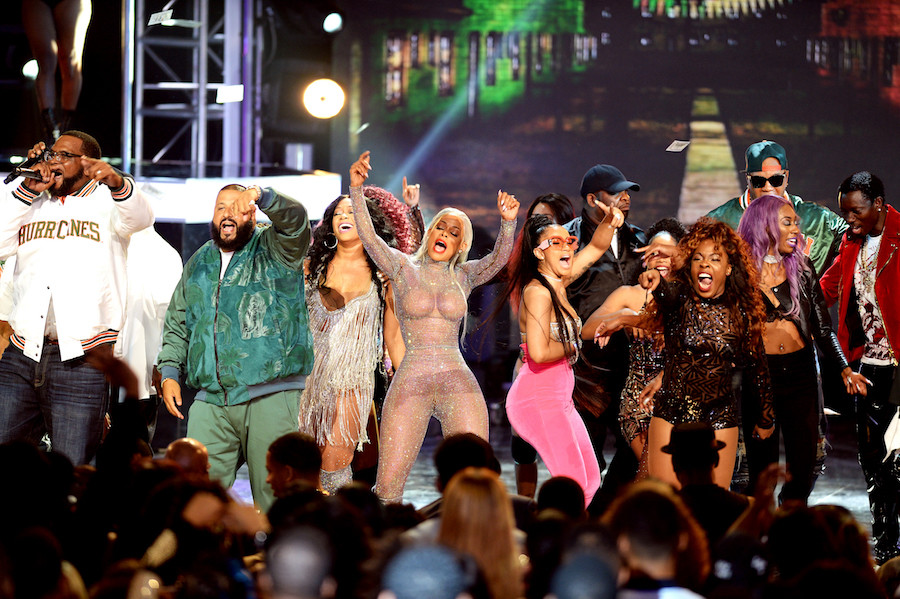 Miami, FL – For more than a decade now, the BET Hip Hop Awards have been a placeholder for rap music that may be too gully for mainstream consumption — much like Rap City and Uncut before it.

BET Hip Hop Awards Agree: Cardi B Is The Biggest Success Of 2017

No, they’re not a replacement for the countless rappers who have been snubbed by the Grammys; nor were they ever designed to be. The annual spectacle — first started in 2006 by the genius of one Mr. Katt Williams — has flourished into a trending topic dominating, multi-regional bars and hitmaking expose that offers the spotlight to some of the notable Hip Hop that may elude some of the more tenured smoochfests of music culture.

Speaking to DX right before the taping began, Williams — in preparation for his upcoming movie, Father Figures, opposite Owen Wilson — reflected on how far the show had become.

“As the person who initially came up with the Hip Hop Awards, it’s a pleasure for me to see it get this point,” he humbly admitted. “I brought it to Reginald Hudlin as something that needed to happen. When we look at [a category like] Best Album, everybody that’s nominated, we have those albums. We went and got those … we listened to that music. There’s nobody that paid their way in. This is legitimate. So that’s what I’m most proud of.”

Inside The Fillmore Miami Beach at the Jackie Gleason Theater, local residents as well as industry insiders, label heads and of course, artists nestled in the venue for what was technically a historic moment. For the first time ever, the BET Hip Hop Awards moved outside of Atlanta’s vibrant scene into the uncharted waters that splash Miami’s sandy beaches.

Although the ATL still very much maintains a stronghold on the culture’s pulse, no one can ignore the strides Florida Hip Hop has made in the past few years. Seasoned vets such as Rick Ross, T-Pain, Flo Rida and Plies (who were all in attendance) paved the way for the new flock of notables like XXXTENTACION, Zoey Dollaz, Ski Mask The Slump God, Kodak Black, Denzel Curry and even Bhad Bhabie to have careers.

While the movement is undeniable, the unity is somewhat transparent. It makes sense for BET to step out in front and attempt to place a stake in a new burgeoning land, sans the Christopher Columbus bullshit. The attempt went over smooth enough but combining the annual hurricane season with the lack of buildup and internal competition (see: VH1 Hip Hop Honors, traditional BET Awards, etc.), the city wasn’t exactly ripe with rap euphoria.

When it’s all said and done, DJ Khaled will likely go down as the biggest entity Miami Hip Hop has ever produced. He repped the 305 true and proud in his hosting duties. The show kicked off with one of Khaled’s biggest hits — “I’m So Hood” — featuring all the smash record’s original co-stars but trailed into a formulaic order of operations. Both Migos and Playboi Carti (ATLiens!) took the stage for performances that did nothing for the element of surprise and even Cardi B’s “Hustler of the Year” and Kendrick Lamar’s “Album of the Year” (for DAMN.) wins felt more like “duh” moments than anything else.

That being said, when Miss Bodak Yellow took center stage to perform her trailblazing, chart-topping club breaker, it was obvious she has been working on her presence and self-awareness. It may have been her most confident performance of the No. 1 record to date. Even placed at the heart of MIA, she was right at home thanks to her stage set that emulated a Bronx bodega, replete with the superthug using the streetlight as a chin-up bar.

Generally, the idea is to save the best for last and in the case of the 2017 BET Hip Hop Awards, they nailed it like a carpenter. Luther Campbell a.k.a. Uncle Luke was this year’s recipient of the I Am Hip Hop Award, and he unapologetically cursed at the powers that be and the cross he carried that caused his and the raunchy 2 Live Crew’s legacy to be silenced a bit. Viewers on the TV won’t experience the full effect due to censorship, but the 50-something Luke Skyywalker kept it as nasty as he wanted to and was a real one for it.

Following his unfiltered acceptance speech, like Clark Kent to phone booths, Uncle Luke changed out of his three-piece suit into a Miami Hurricanes jacket and found himself reunited with Trick Daddy, Trina, Flo Rida and even Rozay. They breezed through some of the biggest hits from his 2 Live Crew days and his own successful solo career.

Although this year’s show will ultimately be more digestible through bit-sized Instagram moments, the fact still remains that Hip Hop still has a viable platform curated by the people who love it the most.