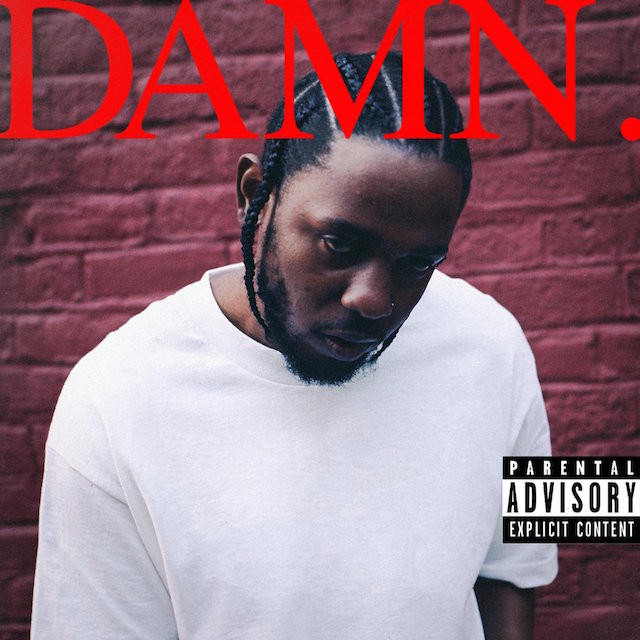 If one were to pinpoint the mission statement of Kendrick Lamar’s impassioned manifestos throughout his career, an accurate place to land would be Section.80‘s “Ab-Soul’s Outro” where he quips, “I’m not the next pop star, I’m not the next socially aware rapper, I am a human muthafucking being over dope ass instrumentation.”

Initially seen as a refuge from the external forces of peer pressure and street gang warfare, Kendrick’s dedicated work ethic has steered his own fate toward becoming the most compelling, acclaimed and widely debated MC of modern times. Routinely putting his conceptual mind to work, DAMN., the Compton scribe’s fourth credited studio album, is an extension of his running narrative of living through spiritual crises while managing stardom and success. Consistent with his themes while always experimenting with new sounds, his latest journey falls in line with urban airwaves and simultaneously sneaks in deeper messages, thus making for a nearly critic-proof final product.

A complete 180° turn from the intricate live arrangements that comprised the bulk of Lamar’s last masterpiece, 2015’s To Pimp a Butterfly, simplistic piano keys and crisp programmed drums took Hip Hop’s preeminent savior figure soaring up the charts with lead single “HUMBLE.” A collaboration with blockbuster rap visionary Mike WiLL Made-It seems like a reach on paper, but Kendrick Lamar designs its catchy hook to amp a club audience up while still offering a lesson (or three) about modesty.

The newly formed collaboration also finds electric synergy on DAMN. opener “DNA.,” as the de facto king of L.A. details the complexities that make up his being before letting his ego run amok to demonstrate deductive reasoning why he should be considered among the all-time elite. Long embroiled in an unspoken war of subliminal jabs where popularity is stacked against quality and audiences have been practically forced to pick a preference, an educated guess can interpret the playful “ELEMENT.” as Kendrick drawing a line in the sand. Though he’s still unwilling to pull the pin from his figurative grenade, the sung hook could be seen as a cheeky imitation of Drake’s highly praised radio-ready vocals. Indulging his fantasies of crossing over while playfully getting his point across, he feeds the public’s frenzy for tension to result in an official beef on wax, with this being perceived as yet another declaration for Drizzy to tread lightly.

For all of his self-fulfilled bravado, Kendrick has made an equal habit of running full speed to bare his soul on wax. When left alone with his emotions over a minimalist production from chief conspirator Sounwave, a performance such as displayed on “FEEL.” is proof positive why diehards consider him peerless. Vulnerability takes center stage here as he rattles off a complex range of thoughts from hopelessness regarding the state of the world to his innermost struggles: the pressures of being a rapping savant whose personal well-being is rarely considered, boiling over with the sobering conclusion “ain’t nobody praying for me” (a phrase repeated throughout DAMN. that ties his storyline together, e.g. the opening words of “HUMBLE.”).

Puzzle pieces are further connected as the Bible-reciting phone call from Kendrick’s cousin referenced on the meditative “YAH.” surfaces on “FEAR.,” which is by and large the arguable highlight of DAMN. Stripping away the glamorous facade upheld by Hip Hop’s more ubiquitous influencers, he paints one of his most vivid pictures to date atop an Alchemist creation as listeners are taken through two decades of anxiety. Physical discipline keeps our protagonist walking a straight line in the early-to-mid ‘90s, then years later he’s forced to face the daily trauma of adolescent street terrors before fast forwarding to his present position, which includes phobias of frivolous spending and shady businessmen mismanaging his finances, all while facing concerns of how his art and legacy will be received.

Kendrick is generally averse to thriving within the mainstream via formulaic paint-by-the-number rhythms, but DAMN. marks the first time he dares to fully embrace the industry’s reindeer games. On “LOYALTY.,” introverted hitmaker DJ Dahi provides K. Dot and pop queen Rihanna with his distinct commercial bounce that’s normally found on songs with far less substance, so much that it’s easy to overlook the greater subversive message of placing God ahead of worldly things and people. “LOVE.” is a heartfelt new age ballad that finds Kendrick proclaiming undying devotion to a woman, and while it’s unlike anything that came before it, it doesn’t stretch boundaries as far as penultimate track “GOD.” By far the album’s least organic occurrence, here he goes hard at keeping pace with the status quo.

Diehard fans may scoff at DAMN.’s crossover ambitions but Kendrick rectifies matters toward traditionalism with the closer “DUCKWORTH.” A tale of Aesopian proportions (also one of the few places DJ Kid Capri’s sporadic drops fit best), 9th Wonder Ginsu chops the vocal samples of eclectic underground band Hiatus Kaiyote three times over on a track that reveals Kung Fu Kenny’s career exists due to his father being spared in a long-since-past chance encounter with TDE boss Top Dawg. The surprise ending takes us back to the LP’s intro where a fatherless Kendrick is murdered by a stray bullet, a callback to how the skits on good kid, m.A.A.d. city and spoken word intermissions on TPAB factor into overall concepts greater than how they appear alone.

In all, DAMN. makes baseless any claims that Kendrick Lamar isn’t an all-time great.

Cohesive as ever and undoubtedly his best project from a digestibility standpoint, if there’s any knock against DAMN., it’s that it may not enjoy the earth axis-stopping moments that his previous two releases did, generationally and culturally, respectively. Some fans already exposed their greedy side, having fallen victim to internet urban legends that the project was just the first part to a secret sequel, yet possibly implying that the album’s shelf life won’t be wholly immortal. Whether it’s a future classic or impenetrable catalog builder remains to be seen, but once more, King Kendrick has proved through linear vision he’s naturally able to outshine the rest of the mainstream while still working to figure out the world around him.