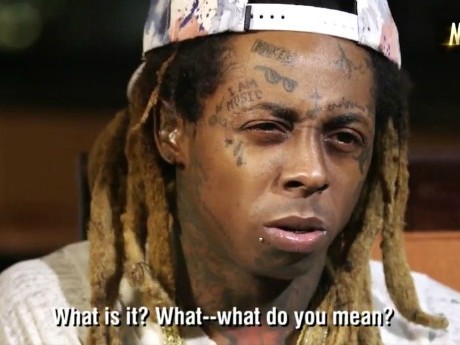 Lil Wayne has been a polarizing character his entire career and that attribute remained tried and true after his recent interview with ABC’s Nightline went viral.

When reporter Linsey Davis gauged the Young Money star’s vested interest in the Black Lives Matter movement, his response was shocking but for some, not all that surprising.

“What is it? What do you mean?” he counter questioned before spewing into a rant, “I am a young black rich [muthafucka]. If that don’t let you know that America understand black [muthafuckas] matter these days, I don’t know what it is. That man white [points at cameraman]; he filmin’ me. I’m a [nigga]. I don’t know what you mean man. Don’t come at me with that dumb [shit], ma’am. My life matter. Especially to my [bitches].”

But lo and behold, it was recently brought to the Internet’s attention that Weezy, 34, did indeed know what Black Lives Matter was, as he was recently filmed screaming the political slogan at one of his concerts.

The unearthing of said incident was made possible by Nigel D. of RealTalkNY, who posted footage from Wayne’s severely overlooked Lil Weezyana Fest 2016, where the star of the show was adamant to remind the thousands in attendance (and thousands more watching on TIDAL) that black lives, indeed mattered.

Wayne’s latest flood of perceived ignorance is especially disheartening, considering Wayne hails not too far from where Alton Sterling, the Baton Rouge man who was unnecessarily killed by two police officers in a June 2016 arrest, once sold CDs.

At this point, it’s obvious that the media knows what direction to steer Lil Wayne into a brick wall when it comes to his interviews. Still, every man is entitled to an opinion, regardless on how reckless or ill-conceived they may come across.

At any rate, Weezy F. got Twitter both livid and lively with discussion, spearheaded by the likes of Royce Da 5’9, 9th Wonder and comedian Andrew Schultz.

Cashier: Would you like to donate $1 to the Black Lives Matter movement?

Me at first: Birdman needs to release Lil Wayne and give him his money
Me after the interview: pic.twitter.com/B2zax1HSPq

I'm not really mad at Lil Wayne's thoughts on BLM. He once said the F was for Phenomenal. I was more upset then.

It turns out that Lil Wayne, the guy who thought releasing a rock album was a good idea, doesnt have the smartest takes? WHO WOULDVE THUNK? pic.twitter.com/K4ho3MvZnv

Her: Who tf you think you talkin to?

This interview really got me ready to hear the Carter 5.

I agree with @9thwonder RT @DROPmyBEATS: @TalibKweli thoughts on lil wayne and his BLM comments?