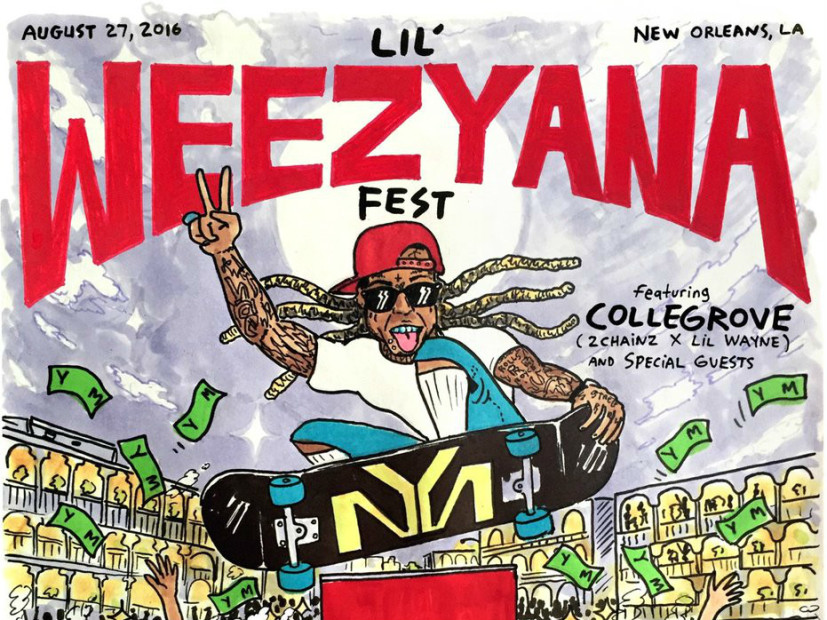 The event is to feature Yo Gotti, Migos and New Orleans legend Mystikal. Lil Wayne will headline the show with 2 Chainz as they perform hits from their collaborative Collegrove album.


(This article was last updated August 18, 2016 and is as follows.)
The wait is over. Lil Wayne has unveiled the official Lil Weezyana Fest lineup and it’s a big one.
For Wayne’s second annual festival, he enlists Yo Gotti, Migos and New Orleans legend Mystikal to take the stage for the event, which is to be held August 27 at Bold Sphere Music at Champions Square in Tunechi’s hometown.
Weezy F. Baby had already announced that 2 Chainz is co-headlining the Lil Weezyana Fest lineup with him as part of their Collegrove collaboration.
Purchase tickets for Lil Wayne’s second Lil Weezyana Fest at TicketMaster.
(This article was first published July 12, 2016 and is as follows.)
Lil Wayne is not letting reports of seizures slow him down as hours after clarifying that he is ok from the most recent scare, he announces the second annual Lil Weezyana Fest. The event is to take place August 27 in Tunechi’s hometown of New Orleans.
This year, 2 Chainz will join Wayne as the headlining act for Lil Weezyana Fest 2. The two released the ColleGrove album in March and have been promoting it with joint performances.
Last year’s Lil Weezyana Fest featured a Hot Boys reunion and an appearance from fellow New Orleans legend Master P. Drake also performed. The event was live-streamed on TIDAL.
Lil Wayne recently paid tribute to his hometown by releasing the Sqvad Up mobile game where fans can play as the rapper skating through different New Orleans neighborhoods.
See the flier for Lil Wayne’s Lil Weezyana Fest 2 below: