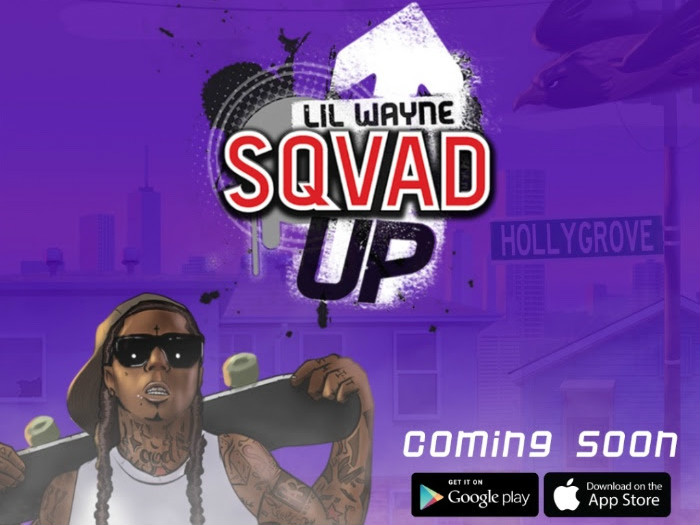 Even though he reportedly has two albums in the vault, Lil Wayne is continuing to keep himself relevant by expanding past music. His latest venture is the Sqvad Up mobile game, which he announced on Instagram yesterday (June 6).

The clip starts with Weezy F. Baby’s signature lighter flick, an inhale and a puff of smoke before he introduces the game, which is set to be available June 10, according to a press release.

“Welcome to Hollygrove,” he says, “my town.”

The image shows an animated version of Tha Carter rapper holding a skateboard next to a Hollygrove street sign.

The New Orleans legend will curate the soundtrack for Sqvad Up. The music is said to be produced by Hollygrove’s own Nesby Phips.

Lil Wayne teamed up with technology company Utility to create the “action packed game that celebrates the Hip Hop icon’s love for the thrill of skateboarding.” Players will seek to dodge obstacles as they collect gear and other upgrades.

Through his partnership with Samsung, Weezy is set to preview the app at E3, which runs June 14-16 in Los Angeles.

“I’m super excited to drop my first mobile skateboarding game Lil Wayne: Sqvad Up as a way to share my passion for skateboarding. It’s also special to celebrate all that makes my home of Hollygrove and New Orleans such a dope place,” Lil Wayne says in the press release. “I started skateboarding at 29, not just because I thought it looked cool, but also because I wanted to be able to inspire kids to get outside and play. Skating is a perfect way for kids today to stay out of trouble and be positive and active.”

Lil Wayne furthers this mission through his Sqvad skate team. The roster houses six skaters who the rapper has committed to mentoring.

Other rappers to have announced mobile games are Eminem, The Game, Fetty Wap and Tunechi’s protege Nicki Minaj.

Slim Thug honored his Houston roots through his “Roll Like a Boss” mobile game. He spoke with HipHopDX about the importance of “diversifying your bread.”

View Lil Wayne’s Instagram announcement for Sqvad Up below: