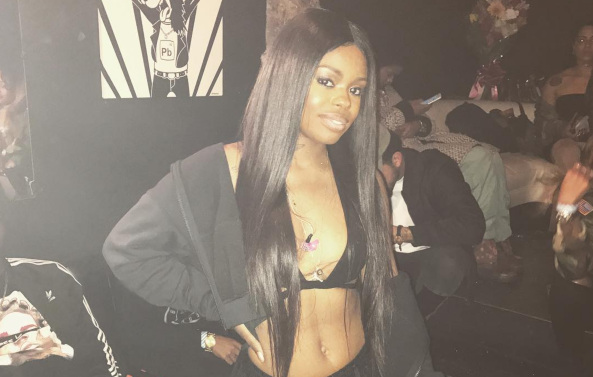 It’s finally here. Night two of Majid Jordan’s sold-out show at The Fonda Theatre in Hollywood, CA. I was just here for Taking Back Sunday. I’m starting to feel like every show I go to at this venue sells out. It’s a beautiful thing.

You may have heard them from their feature on Drake’s “Hold On, We’re Going Home,” or having Drake featured on their track, “My Love.” Either way, they are lit. Seeing the Canadian duo (Majid Al Maskati and producer Jordan Ullman) on stage tonight was breathtaking. Majid sounds exactly like he does on the records. What a voice.

I was having a lot of trouble pronouncing Majid. I swear, someone once told me it was (mah-heed), which I liked, because it sounded French. It’s definitely just (mah-jed), exactly how it sounds. Shout out to Avi at Warner for the correction and being the plug. That’s my girl.

I hate to say this but, save the best for last. Tonight, we got blessed with two of R&B’s greatest (currently). First, Majid brings out dvsn, which already had the ladies riled up. A couple songs later, PARTYNEXTDOOR blesses the stage. This is what we call baby making music. Shout out to #OVO in the building tonight.

Yassssss. Dreezy is the truth. And I am so honored to have attended her first headline show in Los Angeles. This took place at The Echo in Los Angeles, tucked away on Sunset Blvd. in Silverlake. The moment I walked in, I was freezing. Come to find out, Dreezy told them to up the AC cause she was hot. Dreezy gets what Dreezy wants.

Shout out to #Dreezy for chopping it up with us before her first headline show in #LosAngeles ????

I wanted to interview her so bad, and this was the perfect opportunity. Huge shout out to Jahmal for making that happen. We chopped it up backstage before her set at 11pm, and she was just the sweetest. All her people were crowded in this tiny room full of weed, drank, and snacks. (Can’t forget the snacks!)

I was stoked to meet PJ as well. She is amazingly talented. We were all chilling in there and then Kamaiyah walks in. It was nothing but love. Seeing them as tight as they are made me happy.

Takeaway from tonight: Dreezy can fucking spit. She goes in too. Most of you probably thought she was just a singer from “Body” featuring Jeremih, but I’m telling you. Listen to “Spazz” and you’ll see why. The most epic part of tonight was seeing all the dudes in the crowd spitting her verses word for word. That is a statement in itself.

Yo body on my body baby. ? @dreezydreezy @jeremih

She did it right tonight. Bringing out K Camp, Kamaiyah, and Jeremih was so unexpected. She did it though. It’s only up from here. Excited for what’s to come, Dreezy.

It’s Thursday of Halloween weekend, which means, the party starts now. Halloween is basically an excuse to dress up as someone you’re not and turn the fuck up. This was Home Grown Radio’s Halloween House Party at SOL Venue in Carson, CA. We definitely came out to support the homies tonight.

Home Grown Radio started out as an online radio station (Bringing Radio Back To Its Roots!”), who puts on for the independent Hip Hop artists. Now, they’re a part of LA’s Real 92.3. Salute. The entire bar/lounge was decked out with Halloween decorations and laced with candy and snacks. Everything was on point.

The drink menu for the evening.

I was struggling with a costume (as I always do) and my girl suggested I put on a beanie and be a robber. Ding ding ding. I was a “Thief In The Night.” I thought I was clever for that one… except when 50% of the people didn’t get the Young Thug reference. Sigh.

The DJ was playing all my jams. “Sliding Down The Pole” by E-40 brought me right back to college. The star of the night: these fake jellyfish sitting at the bar. I need this in my room. Shout out to Sparkle, who legit thought they were real.

this @YouTube carnival of souls halloween party is so lit. like can i work here lmao pic.twitter.com/oOffrp0zTs

Youtube for the win. This was their Carnival of Souls Halloween party. Description: a terrifying haunted house, killer photo ops, Thriller dance lessons, a scavenger hunt (with prizes!) and a costume contest. All I can say was. . . the costumes were on point. I was ashamed to be there in a Superman T-shirt.

Pumpkin pie and candy for everyone.

The moment we walk in, we were completely fascinated by everything. There was so much to look at: the people, the building, the decorations, the free food, the treats, photo backdrops, President Obama (in costume form). It was honestly one of the most well put together parties I’ve been to in a while. One of those events where you’re like, “Wow, I’m glad I came.”

YouTube Space LA is located in the beautiful city of Playa Vista, CA. The building is massive and we took our sweet time to explore the premises (where they permit us to). Tonight makes me retract my statement about hating Halloween earlier. Everyone was so festive and so friendly. The night consisted of guessing people’s costumes and stuffing my clutch with Tootsie Rolls.

We also concluded we want to be a YouTuber.