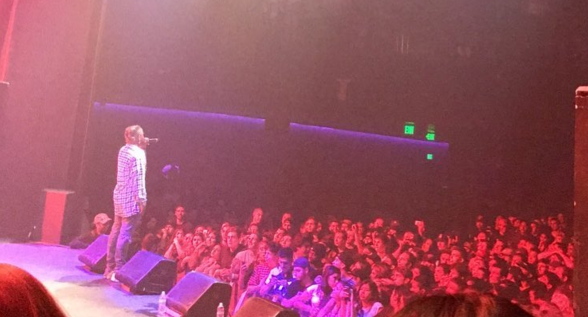 I love comedy. And this is one of my favorite shows in Los Angeles, possibly one of the best. Russell Simmons‘ iconic All Def Comedy LIVE, which takes place every Wednesday at the Inside Jokes Comedy Club. Shout out to All Def Digital behind this magic.

This takes place at the TCL Chinese Theaters in Hollywood, CA. If you got a friend in town visiting on a Wednesday, take them here. The show is hosted by Tony Rock, (who is Chris Rock’s brother, if you didn’t make the connection). But it must run in the blood because he is literally hilarious. Seriously, he cracks me up.

I was told to arrive at 8pm, with the show starting at 9pm. When did it actually start? 10pm. I should have known. Shout out to DJ Orator who always throws down all the slaps. There was complimentary cocktail hour beforehand, so everyone was feeling good. I was sad Uncle Rush wasn’t in the crowd tonight. He usually posts right up front on the VIP couches.

Here was the lineup for the evening. It’s a surprise every week, so you never know who could pop up. They had Kevin Hart come through before, which would have made my life. By unanimous vote, the best person hands down tonight was Ray Grady. He had this insanely deep voice that caused automatic laughs. He knew it too.

I’m actually eating a salad with cherry tomatoes right now, which reminds of one of his jokes from the evening. You definitely had to be there, but it was something along the lines of that moment you bite into a cherry tomato, the explosion of the juice being equivalent to a man’s balls ejaculating. Yeah, he went there. I’m honestly not sure I can look at these tomatoes the same again.


Huge shout out to my girl Lyric Michelle who got on stage to drop some bars. Tony Rock was calling out the rapper in the room, asking him to identify himself. She chimed in real quick, screaming “a female one.” Tony asked if she wanted to show what she could do, and with no fear, she ran down to the stage. Respect.

A party to celebrate a dispensary? Say no more. A couple days prior, I was informed I had to meet Sophia Chang. I am always down to meet other females in music, especially Asian. Don’t underestimate us.

Well, Sophia. Don’t underestimate Sophia. I found out she is the former manager RZA, GZA, and ODB. I humbled myself real quick. I was nowhere remotely close to that. She is the shit. And she was so sweet. Ridiculously kind. I was taken aback. Thank you, Justin Hunte, for the introduction.

Being a medical marijuana patient, I am very familiar with dispensaries around Los Angeles. But this was something else. This was the nicest dispensary I’ve been to in the area. It reminded me of the ones in Orange County, CA: clean, spacious, modern, hip, and just attractive to the eye. The ones I’m used to are hole-in-the-walls (but they work).
MedMen is located on the busy street of Santa Monica Blvd. in the heart of West Hollywood, CA. They could not have picked a better location. The bright eye-catching MadMen sign sat atop the wide open glass windows looking in. That alone set them apart from the rest. You can see all the glory inside, 24/7.

One thing I have to commend them on is their wide variety of products. It was like a combination of all the dispensaries I’ve visited, in one spot, for your convenience. They also take credit cards. The cash only rule is something that I complain about on a regular basis. If you are a Venmo advocate, you probably hate cash like me.

I was a little sad because apparently, they have to stop selling at 8pm, by law. [Insert “Law” by Yo Gotti and E-40.] Of course, I pull up at 8:13pm. Of course. They must have felt bad for me because one of the workers hooked it up with a vape pen, something I’ve been meaning to cop for a while now. Huge thanks, I was beyond excited.

All the workers there were so great. They showed me how these glass containers worked, because I was extremely confused when I fiddled with them the first time. You could literally zoom in on the bud through a magnifying glass, and there was also an opening so you can sniff the tree. All the flowers were listed in the iPad in front of you. Like I said, they are doing it right.

I had to pleasure of meeting Sophia, who introduced me to her partner investor Michael Ostin, as well as the CEO of the shop, Adam Bierman. Apparently, Adam is the expert of experts behind the marijuana business. Any questions, he’s your man. Everyone that attended got a gift box when they left, full of MedMen accessories. I love gifts.

Taking Back Sunday’s sold out show at The Fonda Theatre.

Next up: Taking Back Sunday at the Fonda Theatre in Hollywood, CA. My homeboy was blown away by the beauty of the venue. I don’t blame him. Although I’m used to it by now, I always feel some type of way when I’m at a sold out show here. This was nostalgic as fuck. TBS was one of my favorite bands in high school.

The first hour consisted of their new stuff, which I am not too familiar with. It didn’t matter. It sounded great. The last hour was what really had me going. They played all their hits. If you were emo like me, you understand the greatness in “Cute Without The ‘e.’” The entire crowd was screaming the lyrics verbatim, as was I.

“MakeDamnSure” was the perfect song to close out the night. Adam Lazzara, the lead singer, is a boss, along with the rest of the talented band members. These guys have been in the rock game for a minute. I’m so happy to see they’re still doing what they live. Music saves lives.

The length we go to create these great experiences for you, you will never understand… "And they don't have no awards for that" *drake voice* #LOKiEvents

Huge shout out to my girl Uzo, who throws these dope events to get underground artists together and give them a chance to shine. She started Loki Management for that precise purpose. The #CutTheFee concept is that “major concerts should heal, not steal.” How many times have you wanted to hit a show but couldn’t afford it?

These shows she puts on are affordable, and 20% of profits go to charity. I don’t know how she does this on top of a full-time job, but I am beyond proud. Tonight, it all came together. It was nothing but great energy, paired with live performances from some talented artists.

I pull up to the spot downtown, straight up in the cuts. That moment you have to double check the address to see if you got it right. It was perfect. It took place inside a spacious loft, which was tucked away up three flights of stairs. There were also food and liquor to purchase. I caught Zikomo’s set, which was dope. First of all, this fool wears a mask as he deejays. (Masks scare me.) But his set made up for it. It was a fusion of Hip Hop and the Carribean. The crowd was loving it, no Mickey D’s.

I had to leave as Tiffany Gouche, the headliner, got on stage. She started talking and I realized she had the most glorious voice ever. Someone in the crowd screamed “Keep talking!” and I agreed.

I made my way over to The NOVO at L.A. Live, because I had to catch Azizi Gibson’s show. Thank goodness I was already downtown. When I found out he wasn’t on stage until 1am, I was annoyed. It’s been a long week. But I missed his last (sold out) show at The Roxy, so I wasn’t going to miss this one. Exhibit A: FOMO.

Shout out to Mark for that all access pass. The show was only $5 for those who wanted to attend, and he definitely filled up the venue. Hearing “Levels” live reminded me there’s hope left in Hip Hop. Azizi is a real one and raps about real shit. He also brought out the legendary DJ Paul of Three 6 Mafia on the stage. Salute.

I was able to see fans, especially females, reciting all his lyrics in the very front row.  Congrats Azizi, this is what it’s all about.