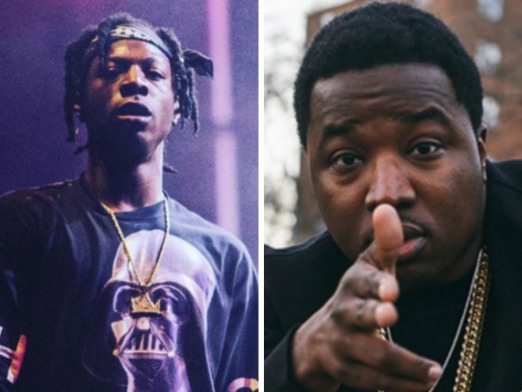 The tension that had been simmering between Joey Bada$$ and Troy Ave since last summer completely blew its top earlier last week, with Crown Heights rapper Troy dropping some heavy verbal artillery on his Flatbush bred neighbor in the form of the vicious diss track “Badass.” The shots rang off after the Beast Coast movement linchpin and Pro Era figurehead Bada$$ clowned Ave’s poor sales on his Statik Selektah-produced new single “Ready.” (“60k first week for the Badass/200k to this day I know you niggas mad/With the 80/20 split my nigga do the math/My nigga Kirk just outsold Troy Ave,” he coldly rapped.)

Troy Ave’s comparatively low numbers–Major Without a Deal shipped just 5,000 units in its first week, drawing some fairly harsh industry comment–had caused him to fire some lowkey shots last June, accusing Joey Bada$$ of being “fake independent.” But with the pair now slugging it out on record and across Twitter, with others being drawn into the dispute, here are five key points from hip-hop’s latest high-profile feud.

In Hip-Hop, Almost Nothing Is Off Limits…

On his track “Badass,” Troy Ave taunted his Big Apple rival over the death of his fellow Pro Era partner-in-rhyme Capital Steez (who tragically committed suicide just before Christmas 2012) with the lines, “Don’t get suicidal like ya friend, here’s a casket/Steez burning in hell, my burner’s in my belt/I’m really killing shit, you niggas killing yourself/Fucking weirdos, off the roof, ‘Steer clear, yo!’/This niggas tryin’ to fly – he think he a superhero/Splat man, fuck you and that man…”

The BSB rapper’s shock tactics serve as a depressing reminder that diss tracks are most definitely no-holds-barred affairs where basically anything goes. Even Hip Hop’s most famous wax wars have seen its marquee stars trade below-the-belt barbs. 2Pac’s “Hit ‘Em Up” ridiculed The Notorious B.I.G. over Faith Evans’ alleged infidelity with the infamous “That’s why I fucked your bitch your fat motherfucker” line, before mocking Prodigy of Mobb Deep’s sickle cell condition, while in his war with Nas, Jay Z would boast that he slept with Esco’s baby mama on “Supa Ugly.”

…But Respect The Architects

The Pro Era figurehead clapped back at his fellow Brooklynite Wednesday morning by unearthing a handful of tweets from 2009-2011, in which Troy Ave took shots at Nas. Given that Nas debuted with Illmatic, a bona fide Hip Hop classic, and continues to be a cornerstone of those endless “Top 5 Dead or Alive” debates almost a quarter-century after his legendary “Live At The BBQ’ verse, the Twittersphere was quick to note it seemed a little foolish for Troy – who was widely ridiculed last year for his low album sales – to dismiss QB’s finest out of hand as “a sucka” and “wack”. No stranger to beef himself, Nas’ sizable impact on the culture has even influenced rap beef terminology: 15 years after his infamous war with Hov’, we still talk about how rappers ‘Ether’ each other on wax.

Still, the ‘Badass’ lyrics led Royce Da 5’9 to wade into the controversy Friday, with the PRhyme star claiming Troy crossed the line and that the BSB man owed Capital Steez’s family an apology. Royce himself is no stranger to beef: his long-running dispute with fellow Detroit native Proof and the D-12 crew saw disses fly back and forth, with the two camps even pulling guns on each other at one point. It all makes you long for the innocence of the late ‘80s Golden Era, when the very worst thing a rapper could do was to accuse another rapper of biting their style. Or call their girl a skeezer. My, how times have changed.

The Mainstream Vs Backpack Divide Never Really Went Away

From his early work (“Survival Tactics,” the stunning collabo with Capital Steez, and the Summer Knights EP) through to 2015’s fully-formed studio set B4.DA.$$, Joey Bada$$ has been hailed by some as the savior of New York Hip Hop, on the strength of him rapping over traditional east coast boom-bap beats. Although it’s wrong to pigeonhole him as simply a throwback to those heady late ‘90s Rawkus days – his recent work has seen him spit bars over beats by Atlanta’s boundary-pushing producer Metro Boomin – that didn’t stop Troy Ave dismissing his nearby BK neighbor as a “filthy backpack rapper out a thrift shop”, declaring “They gon’ play this on the radio, dawg”, before adding “You tryna do music for Coachella/I make shit for foreign whips and drug sellers/You more Digable Planets, I’m more Roc-A-Fella.” For his part, Joey Bada$$ reaffirmed his hardcore roots on “Ready”, stating: “Niggas think because we conscious we don’t really get it poppin’/They forgot we from the bottom/They forgot we had to fight for every nickel, every dollar/Before the money and the power…”.

NY Rap Unity? Forget About It

With Compton king Kendrick Lamar reigning supreme in 2016, and the cutting-edge scenes of Atlanta and Chicago continuing to evolve Hip Hop’s sound, one may think that such a backdrop would possibly foster a sense of unity and purpose amongst Big Apple rappers, given their city is no longer the all-dominating nerve centre of Hip Hop it was in the ‘90s. But you’d be wrong. Within hours of Joey and Troy trading shots, A$AP Twelvy, from Harlem’s A$AP Mob, weighed in, taking issue with the former’s “weirdo” jibes and challenging the BSB rapper to a fight. Styles P – who as part of The Lox and D-Block once had beef with Beanie Sigel, Roc-A-Fella, and G-Unit back – was quick to take Troy to task over those suicide comments, having tragically lost his own daughter last year, and took to Twitter to call for calm, and suggested a sit down between all parties. Such intracity internecine warfare almost echoes the time 50 Cent went up against Ja Rule, Fat Joe, Jadakiss, DMX and the rest of NY’s major league in the mid-2000s.

Speaking of Fif’, Troy Ave has caught considerable flak in many quarters over his cadence and flow bearing more than a passing resemblance to the G-Unit general’s unmistakeable vocal style. But whether or not he is simply a “bootleg 50 Cent” (as his detractors would claim) it seems ya boy Curtis’s blueprint-to-blowing up likely looms large over Ave’s strategy. From 50’s debut, the incendiary industry stick-up manual “How to Rob” which put him firmly on the map in ‘99, to his entrepreneurial 50 Cent Is the Future mixtapes–now an industry norm in Hip Hop–such a resolutely independent spirit is reflected in the self-sufficient hustle of Troy Ave, who apparently spurned the advances of a handful of majors to finance his own releases.

So with that sort of self-promotion at the core of his strategy, perhaps a little beef tossed into the mix doesn’t hurt. Not convinced by such a cynical stance? Just take a look back at all the memes, tweets, think-pieces, column inches and podcast discussions that stemmed from the Drake-Meek Mill spat last summer.