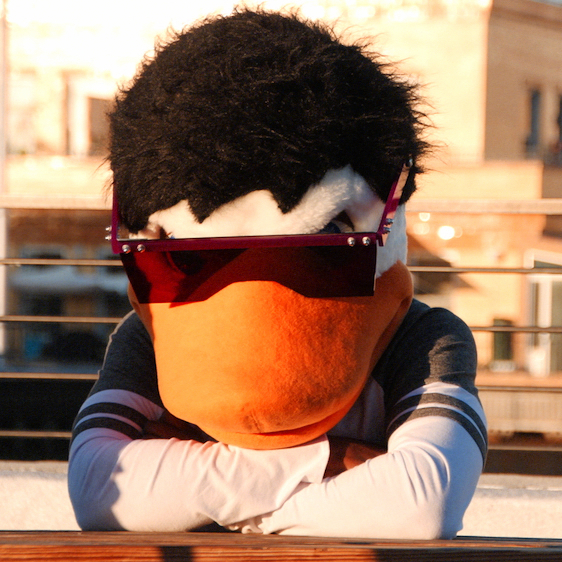 No BullQuack: Everyone From Pharrell To T.I. Knows How Cool WatchTheDuck Is & Soon You Will Too

Thursday evenings at the Downtown Los Angeles offices of Steve Aoki’s Dim Mak Records felt opposite to their specific brand of breakneck EDM. The sleek Apple Store aesthetic was almost mundane in nature. Dare one call the initial introduction fairly normal. Making one’s way around the up tenth office space, music blasting from a room past a video room and another area full of Dim Mak eyewear gets louder and louder as one gets closer. Moving through one heavy as hell door, a recording studio sits two distinct two individuals known for making clever fusions of Hip Hop, Funk, Soul and oddly enough, Dubstep. Sitting at a couple of chairs are Montgomery, Alabama natives Eddie Smith III and Jesse Rankins who make up musically ambitious collective WatchTheDuck.

While most acts attempt to straddle the line between musical genres, WatchTheDuck has a tendency to jump around like madmen between whatever makes them feel satisfied. Makes sense as their breakout Epic Records release Anatidaephobia featured their breakout single “Poppin’ Off” which also found a placement on the Rick Famuyiwa directed film Dope. Then there’s the signature pimp duck mascot where Rankins described him as “emotionless yet cool.” Between then and now, they gave Iggy Azalea the only good non-single track on her debut The New Classic, made a fan out of Pharrell, became close friends with T.I. and attract Aoki himself. From the global festival scene to the trap house, the group couldn’t be more reflective of where music is heading. “The same energy in a Steve Aoki record is the same energy in a Tip record so the only difference is how it’s expressed,” says Smith III. “For us, we’re fans of both and our music naturally combines everything we love. We are using sounds from all the worlds that we enjoy and make it.” Don’t watch them, Watch The Duck.

Building on their heightened momentum, they released The Trojan Horse EP today. Making its debut on Zane Loe’s Apple Music Beats 1 radio, “Stretch 2-3-4” featuring Pharrell is already becoming one helluva shot in the arm as 2015 drags to a close. “We recorded the whole song with Pharrell,” says Rankins. “I ended up waking up in the morning playing ‘Stretch’ a lot.” Besides guest appearances including Afrojack and ScHoolboy Q, T.I. is hops on several tracks including “Making Luv To The Beat” alongside “Don’t Blame Luv.” According to Rankins, their relationship with Hustle Gang’s leader was orchestrated through Pharrell. “When we first met, he didn’t know who were and he really didn’t want us around,” he says. After laying the hook for Paperwork single “G Shit,” Rankins says they ended up making five tracks that night. Smith III jokingly said if Trojan Horse EP was originally slated to be titled “WatchTheDuck & Friends,” T.I. is probably their best friend. “We’re workhorses and he always ask if we have something to play for him when we hang out.” And yes, they’re most definitely workhorses. When the interview concluded, they immediately rode an elevator to the roof for their “Making Luv To The Beat” video shoot featuring social media star dancer Dytto.

Recorded in their Freedomville studio, the actual title comes from a conversation with legendary Organized Noize producer Kawan Prather. “Our actual album is going to be called Helen Of Troy Alabama and then K.P. suggested the EP be called Trojan Horse,” explained Rankins. Almost like a prophecy, the EP should serve as WatchTheDuck’s grand re-introduction. By the time Helen Of Troy Alabama drops, Smith III says to expect a greater shift in sound. “We’re big OutKast fans and anyone who knows them understands they never made their next album like the last he says. “Being kids, that rung true for us. I think Kanye does a good job of that as well.“ Like the symbolic meaning of their name, beneath the forward thinking sound are guys kicking like no tomorrow. Luke and Lil Jon were the once the kings of call and response sounds that emerged from down south. WatchTheDuck is that for the internet obsessed generation enjoying both Neo Future Odessey and Stankonia.