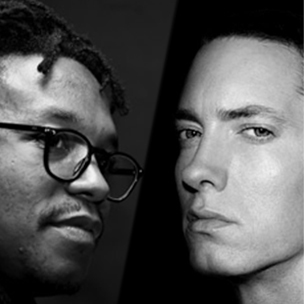 Is Eminem The Last Lampooner In Hip Hop?

Ural: Eminem’s six minute freestyle felt refreshing. Especially with this week’s Meek Mill and Drake fiasco lead to the hotly debated subject of Ghostwriting that’s divided many. Ideas regarding the creative aspect of Hip Hop’s present and future shouldn’t be as complicated as it is but here we are. Shady provided an important lesson regarding what designates a true emcee and a rapper with a knack for creating catchy songs. Yes, anyone can say Em recited some pre-written rhymes but everything felt real. The slight pauses, change in aggression, the level of momentum built, everything felt authentic. Even the level of irrelevant humor prove exactly what’s been missing in this politically correct world of Hip Hop. There was once a time where Em rhymed about killing his baby-momma, raping his mom, making gays the but of jokes in crass ways and delivering lyrical headshots to pop stars without regard for anyone. Years later, the internet has given everyone a voice, offending the wrong group of people can become costly and Em’s rhymes are still sharper than Japanese steel. This time, it’s a different kind-of comedy that feels more lighthearted than offensive; proof that he’s gotten a lot wiser.

Andre: Em’ might be the last of a dying breed in Hip Hop: the verbally acute jokester. Of course, he’s not just that. He can wear many hats along the field of battle, but for all of his other superb characteristics as an emcee it’s his ability to cut deeply and clown heartily in the same sentence that makes him so great.

On the Sway In The Morning show, Eminem dropped a six-minute onslaught acapella the likes of which we haven’t seen in a long long time. This is the age of rappers coming prepared with ducked iPhones like they’re cheating on the SAT’s. Instead, Eminem lit the whole crew up off the dome with syllables flowing out of his mouth like Victoria falls. He also took the time out to straight clown the leading headlines of the day. Sure, making fun of the Bill Cosby situation is crass, but Eminem’s form of humor is important to the rap landscape. So whether it’s Caitlyn or Azaelia Banks or whomever else, the humor is a breath of fresh air in a world where even Young Thug takes himself deathly seriously.

What Does Lupe’s Open Letter Mean For The Song Author Debate?

Andre: Lupe Fiasco came out of nowhere to offer his thoughts on the Meek Mill and Drake tussle, and the Chi city emcee took no sides. Instead, and this is what makes Lupe a genius at times, he took the side of rap itself. First, he addressed the boiling pot that is the “ghostwriter” debate by essentially saying that there will always be folks who bounce ideas off a room of people. He also mentions that some of the best verses in the history of rap have been ghostwritten. As long as one of them isn’t one of my favorites, I guess I’m cool.

What’s most important about the open letter is he’s all inclusive while still being evasive. If this is a come up to you he says then that’s fine, but there are emcees that live for the art of rap and that should be revered. It is revered. And as he points out, that’s why the backlash from the accusations were quick and ruthless. Like a web that sways in a dewy wind when one piece is stimulated, rap is an art form that is alive. Lupe’s open letter brought that back to the forefront, and after his art rap album Tetsuo & Youth, he might be one of the few emcees that have enough clout to actually take on the debate as elder statesman.

Ural: One is either for the money or for the art leave it to Lupe. It’s the most nuanced take on the year’s biggest controversy and makes total sense in today’s industry climate. Everyone either wants to make a hit in the easiest, most cost-effective way possible. Many talk about the creative, cultural and artistic ways of why Ghostwriting is shunned upon in Hip Hop. That’s totally fine. However, in the pop world where people consume massive amounts of music at a time and aren’t concerned with the fine details, whether or not someone writes their rhymes is irrelevant. It’s just not going to matter. For those more concerned with artistic mechanics of rhyming and emcees who markets themselves as the best within that segment of Hip Hop, having a Ghostwriter becomes the equivalent to juicing steroids. Today’s fragmented space is becoming more and more about personal preference.

Which is why Lupe’s open letter had to be created. Chicago’s very own is a master wordsmith whose rhymes are too interpersonal and intricate for him to ever receive allegations in regards to Ghostwriter. People expect Lupe to write his own rhymes. However, it’s obvious he has a mutual respect for Drake’s artistic merit which can’t be denied from anyone on both sides of the fence. Drizzy makes great songs that are ridiculously popular with a specific segment of Hip Hop heads and those who simply aren’t interested in the culture at all.