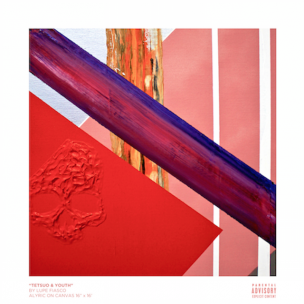 Album rollouts don’t come much odder than Lupe Fiasco’s Tetsuo & Youth. Since the Chicago-emcee announced the project during the 2013 GRAMMY Awards, there’s been several delays and supposed singles. There was Ed Sheeran-featured “Old School Love” and “Next To It” with Ty Dolla $ign, both of which received videos. There was “Mission” and the remix “Remission” with Common and Jennifer Hudson which were dedicated to cancer survivors. There was “Pu$$y.” There was another testy exchange with Atlantic Records that resulted in the release of mini-EP, Lost In The Atlantic. And just when it seemed like Wasulu was embroiled in another corporate standoff, Anonymous threatened to e-attack Atlantic if it did not announce a release date for Tetsuo & Youth. Within 24 hours the label conceded. Seriously, the greatest stories in Hip Hop history have a hard time competing with that one; especially following that time Fiasco Fanatics organized a protest and actually secured Lasers’ release. Who else has made anything powerful enough to inspire an audience to literally fight to buy it?

But even with a release date in tow, from a marketing standpoint, the direction of the album was murky. Los Angeles isn’t plastered with Tetsuo & Youth bills, at least. None of the singles above were included on the tracklist. No media blitz coincided detailing the project’s concept like there was with 2007’s build-up to The Cool. Sadly, some may know more about Lu’s thoughts on Iggy Azalea and Kendrick Lamar than what his fifth studio album is actually about. Whether because of modern pop culture or parabolic strategy is a distraction. Tetsuo & Youth is a beautiful block of metaphor. Chiseling through it requires undivided attention.

“No Scratches” (produced by DJ Simonsayz) is not only one of the project’s most immediately memorable offerings, but arguably it’s most ironic. Lupe narrates three different instances of when it’s necessary to end a situation before colliding with heartbreak. The hook easily speaks to a fourth. Fiasco’s FNF Army has felt fractured in recent years in comparison to the excitement that surrounded him in 2006—arguably a result of L-U-P-Enigma’s contentious public persona coupled with back-to-back lukewarm offerings (Lasers, and Food & Liquor 2: The Great American Rap Album). Lupe’s aware of all of this, though. He addresses fans and critics on the S1 and M-Phazes-produced, “Blur My Hands” (featuring Guy Sebastian). “So you’re starting at the end / That’s the part where you begin,” raps Fiasco. “I skip the bullshit so we can start it where we win / Yeah, spoiler alert / I can hear you all saying ‘Boy you’re a jerk’ / But it’s cool, though / Know we got a rule, yo / Get it in / Then we win and do it all again, ho.”

Possibly the truest talisman to the evolution of Lupe Fiasco as an emcee is how keenly Cornell Westside weaves lyrical and stylistic contortionism in a fashion rarely attempted a city block outside of Battle Rap into super strong songs. The third verse on “Adoration Of A Magi” features an onslaught of assonance that can only be described as absurd (in a good way) partnered with an angelic chorus that subtly alludes to classic album covers:

The song appears to be a salute to today’s generation of rap superstars layered under Metal Gear Solid and Double Dragon metaphors, but let’s face it, this is Lupe Fiasco. You can listen to a Lupe Fiasco album for nine years and still pick up fresh nuances. Replay value is the most resolute quality of his most revered albums and it absolutely rings omnipresent throughout Tetsuo & Youth.

Those eight-minutes-and-forty-nine-seconds of mega-bars on “Mural” might as well be “Dumb It Down” on performance enhancers. “Dots & Lines” (produced by Lupe Fiasco) sounds hokey and is lathered in universal law and alchemy references and just might be a metaphorical shot at Atlantic Records, which makes sense since his contract is coming to an end (“You look just like how I’ma be / Sacred Geometry… Three angels in kind, on time, go straight, don’t sign…”). Perspective flips like “Madonna (And Other Mothers In The Hood),” the enlightening inmate versus correctional officer juxtaposition on “Prisoner 1 & 2” and “Deliver’s” pizza delivery approach to discussing economic disparity keep the album from drifting too far into the ethos, fortunately. It’s still grounded in reality. But there’s a ton going on on Tetsuo & Youth—enough to make a Fiasco Fanatic go A Beautiful Mind.

Perhaps that’s the way to digest T&Y: Lupe’s latest moves more like a collage than a stock collection of songs. DJ Dahi and S1 crafted the bulk of the backdrop and largely the outcome is an hour and 19 minutes of cascading lushness. Away from the seasonal arrangements (“Summer,” “Fall,” “Winter,” and “Spring”) segmenting the album’s moods, most tracks boast scenic instrumentals and orchestral movements connecting T&Y thematically. Terrace Martin’s saxophone solo on “Body Of Work” (produced by S1 and Vohn Beatz) deserves an award (any award), immediately. Dahi’s menacing behemoth, “Chopper” (which includes standout verses from Glasses Malone and Pyschodrama’s Buk, alongside more rapping guest appearances than all of Lu’s previous four albums… combined) fits sonically on the same LP as S1 and Vohn Beatz’ ethereal “Little Death” (featuring Nikki Jean), for example. Sometimes it’s jazzy; sometimes it’s bombastic. T&Y bathes in range. From mic to plug, the project is impressively assembled.

Outside of the disappointing “They.Resurrect.Over.New” (featuring Ab-Soul)—which connects conceptually, but sounds less dope doing so—Tetsuo & Youth glistens with maturity and imagination. Where the Judo Master Of Juxtaposition has grown more challenging lyrically, he’s also grown more naturally emotive. In place of frustration and petulance lives a warmth present for the first time in Fiasco full-length history; as if he’s reached a new checkpoint in the development of his patented simple-complexity; as if making music is again fun for him. Nostalgia is a beast no artist can evade, so comparing this album to his previous work is an exercise in ineptness. Whether better than The Cool or worse than Food & Liquor is a distraction. Tetsuo & Youth deserves its own exalted podium.